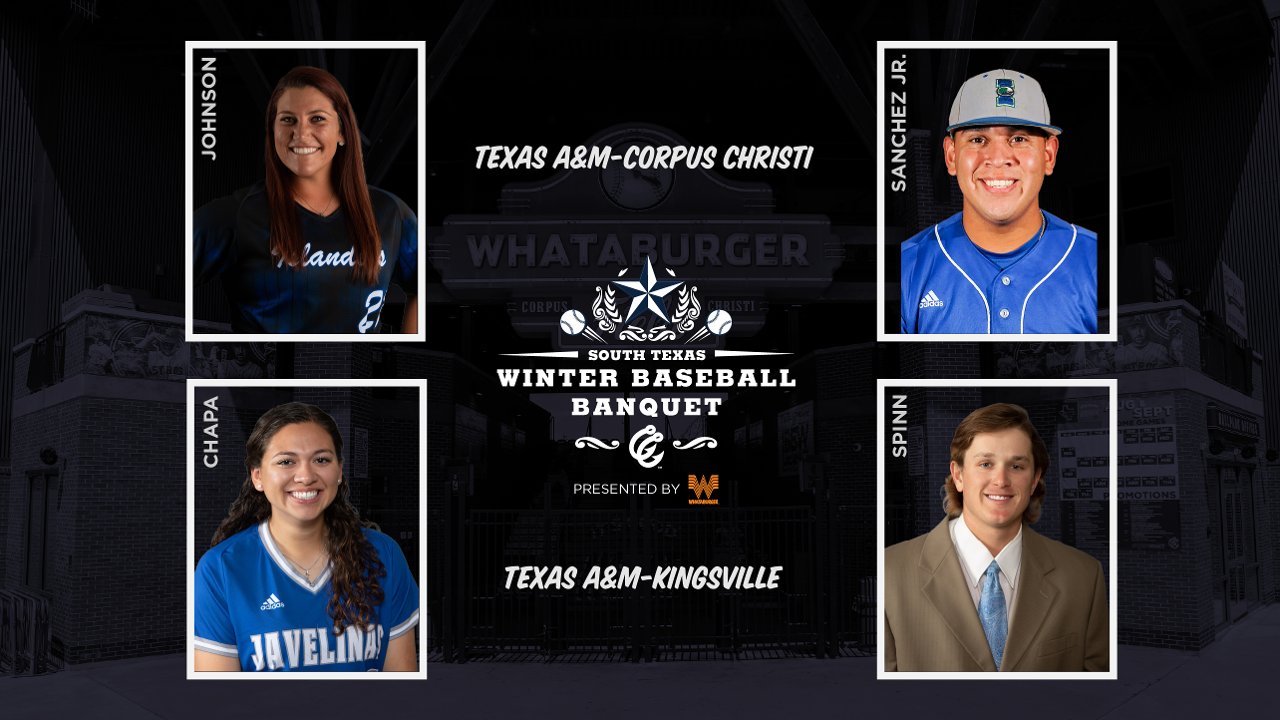 Chapa represents the Javelinas for the second straight year after a historic season for herself and the program. The senior catcher helped lead the Javs to the Division II National Championship Series, where they fell to Augustana (S.D.) in three games. Chapa was named to the College World Series All-Tournament team after swatting two postseason home runs.

The McAllen native cemented herself as one of the best players in program history, breaking her own single-season home run and RBI records in 2019 with 14 and 57, respectively. She graduated as the program's all-time leader in games played (221), doubles (tied, 53) homers (45) and RBIs (194).

On the men's side, Spinn made a splash in his debut season in blue and gold, earning First Team All-Lone Star Conference and Division II Conference Commissioner's Association All-South Central Region second team honors. The Holland, Texas native led the Javelinas with a .378 batting average and 49 runs scored in 46 games as a junior after transferring from Temple College. He reached base at a .481 clip and stole 26 bases. Spinn owned a 17-game hitting streak at one point in the season and reached safely in 30 of his first 31 games played for TAMUK.

Sanchez wrapped his collegiate career at TAMUCC with a prolific season at the plate, ranking in the top 50 nationally in batting average. The Lamar native hit .377, placing 31st in Division I, while leading the Southland Conference with 87 hits and ranking fifth with a .438 on-base percentage.

Sanchez's prowess was on display at the 2019 Southland Tournament, when he launched a go-ahead two-run homer with the eighth-seeded Islanders down to their final out to pull off the improbable upset over No. 1 Sam Houston State. He valiantly went 4-for-5 with a double and two runs scored in the Islanders' elimination game against Incarnate Word two days later. Sanchez, who started all 57 games for the Islanders, was named to the All-Southland First Team and the All-Tournament team to cap his two-year career in Corpus Christi.

Johnson, who hails from Atascocita, was the Islanders' workhorse in the circle in 2019. She appeared in a team-high 32 games on the rubber, including 23 starts, as she led the team with 127.1 innings pitched and 68 strikeouts. The junior also paced the staff with seven wins and 10 complete games. One of those complete games came against the University of Wisconsin, when she fanned a season-high six batters and didn't allow an earned run. She also notched a pair of complete-game shutouts: the first versus Stephen F. Austin and the second against UT-San Antonio. She wrapped up her junior campaign allowing one hit and one run over 5.1 innings of work against Incarnate Word on the season's final day.

Tickets to the South Texas Winter Baseball Banquet, slated for Thursday, January 30 at 7 p.m. at the Ortiz Center, are on sale now at the Whataburger Field Box Office or by phone at 361-561-HOOK.