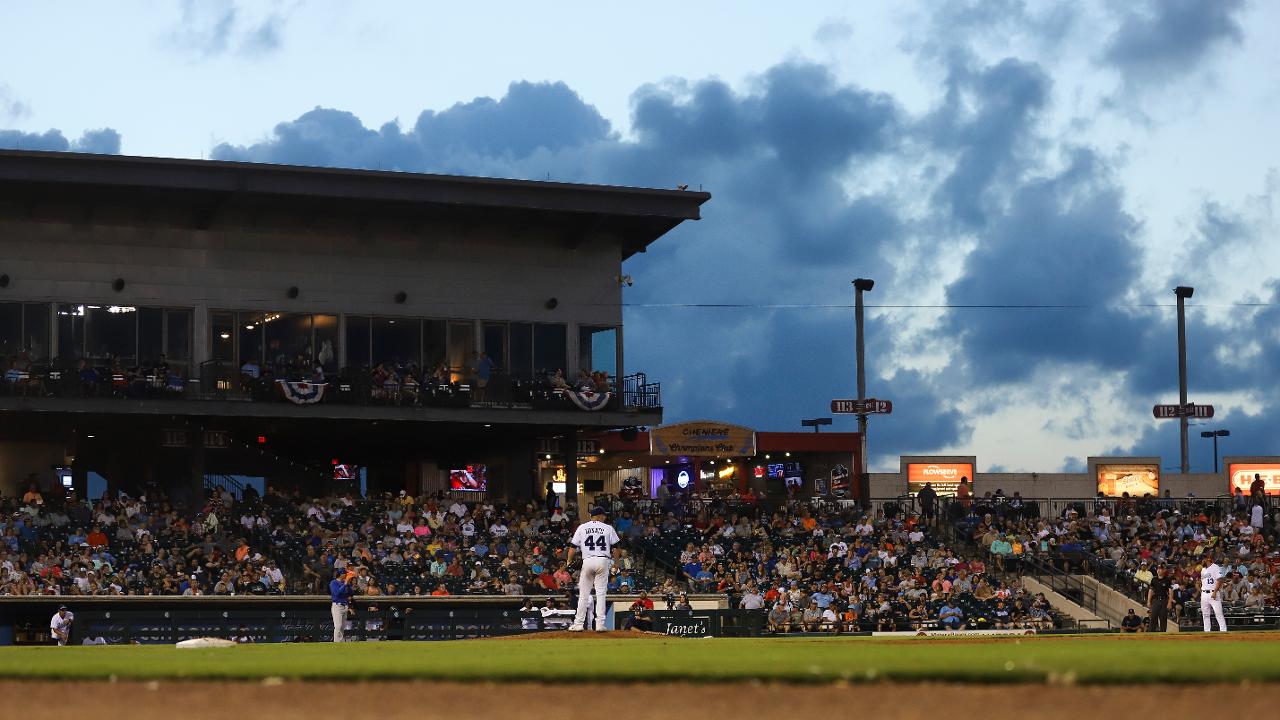 Split in two, the 2019 Corpus Christi Hooks season was seemingly symmetrical, with the club posting exactly as many wins in the second half as it did in the first.

But a deeper look at the season overall shows more nuanced results of a team that rolled with the punches to break club and league records and remained in the playoff chase until the campaign's final week.

The Hooks used 68 players - 10 more than in 2018 - via 108 transactions. Only 10 players on the Hooks' 25-man roster on the season's final day were on the Opening Night roster. That much jumbling, which is typical for a Double-A club, can make it tough to find continuity, according to Hooks manager Omar Lopez.

"It's very hard to be consistent as a team throughout the whole season when you have a lot of transactions," Lopez said. "There were two or three times throughout the season we'd click and then boom, promotions and transactions, then you get new guys and redo it again."

Rojas skyrocketed onto prospect charts with his scorching start with Corpus Christi, batting .322 with eight homers, 30 RBIs and 13 steals in 44 games. Seven of those blasts came in a seven-game span, including a team-record three multi-homer games to earn Texas League Player of the Week on May 26. His hot streak spelled a deserved end to his Hooks career, earning a promotion to Triple-A Round Rock on May 29, where he would continue his ascent in value.

Ivey was virtually untouchable in four April outings, posting a 2-0 record with a 1.13 ERA and .169 opponents' average in four outings. But he would miss nearly three months of the season due to injuries.

The void left by Ivey in May was filled by Cristian Javier, a 22-year-old right-hander who began the year off the radar of most scouting databases but would end up having one of the most dominant seasons in Corpus Christi history. After a bad outing in his Double-A debut at Midland on May 16, Javier allowed just one earned run over his next 20.2 innings, including 4.2 no-hit innings versus Frisco on May 26 in his Whataburger Field debut.

Around that time, Seth Beer received his promotion to Corpus Christi after tearing up the Advanced-A Carolina League with Fayetteville. Beer was an immediate sparkplug, hitting .327 over his first 14 games with the Hooks.

As the calendar rolled over to June, Beer found his power stroke, as did several of his teammates. The 2018 Astros first-round draft pick swatted five home runs as the team hit a Double-A-high 35 bombs that month, six more than the next-highest team. But as foundational Hooks players began receiving promotions to Triple-A Round Rock, such as pitchers Jose Urquidy and Brandon Bielak and outfielder Chas McCormick, new players from Fayetteville struggled to hit the ground running as Corpus Christi went 11-15 in June.

"There is a big difference between High-A and Double-A," Lopez said. "When they get here, it takes a little while for them to adjust. Some of them will make the adjustments and some of them will struggle and they need to figure it out. When you're facing guys on Arkansas and Tulsa, it's going to take a little time. You see guys like Urquidy, he was a little inconsistent and finally clicked. He made two or three good starts and went to Triple-A and continued doing well."

Bryan Abreu, Enoli Paredes and Yohan Ramirez were among the pitchers to quickly learn that lesson. Abreu, promoted to Double-A in late April, allowed seven earned runs over his first 6.0 innings, but would give up just three runs in his next 16.1 frames. Paredes dominated at home, going 2-0 with a 0.93 ERA in six games, but was 0-2 with a 7.23 ERA in five games on the road. Ramirez struggled with command throughout the year, fanning 13.4 batters per 9.0 innings, but walking 6.3 over that same ratio.

That trio along with Javier - all international signees out of the Dominican Republic - combined to accumulate more than one-quarter of the Hooks' 1,453 strikeouts in 2019. The mark smashed the Texas League record of 1,319 set by the 2018 Hooks and ranked fourth in all Minor League Baseball behind Advanced-A Rancho Cucamonga, Modesto and Fayetteville. Hooks hurlers also set a club record by holding hitters to a .221 average, far below last year's previous best of .235.

Offensively, Toro and Beer led the charge in July, when the team had its only winning month at 15-13. Beer hit .337 with nine homers and 24 RBIs that month, while Toro batted .364 with 11 doubles and three blasts. But Houston's blockbuster July 31 trade shook up the roster as Beer, Rojas, J.B. Bukauskas and Corbin Martin went to the Arizona Diamondbacks for Zack Greinke.

Rojas' departure opened a spot on Round Rock's roster for Toro, who ended his tenure with the Hooks hitting .306 with 16 HR, 65 R, 70 RBI, 48 BB, a .906 OPS and 4 steals in 98 games. He was named a Midseason and Postseason Texas League All-Star at third base and earned Hooks Player of the Year honors. After a torrid few weeks in Triple-A, Toro received his first Major League call-up to the Astros on August 22.

"It's hard to predict, but for me it was a matter of time for Toro," Lopez said of his former player's MLB promotion. "He has everything as a manager and development guy that you look for. A guy that always has the same personality, that always controls his emotions, works extremely hard, is an extremely positive guy, has the ability to recognize weaknesses and things he's not doing right."

Despite the roster turnover, including the promotion of Javier, who earned Hooks Pitcher of the Year after going 6-3 with a 2.07 ERA and 114 strikeouts in 74.0 innings, the team remained in playoff contention until there were just five games remaining in the season. Late-season additions such as Jake Adams, Jonathan Arauz and Brett Conine got a taste of Double-A competition, which Lopez said he hopes the likely returners for 2020 will take into the offseason after missing the playoffs at 66-73.

"It is a good thing that sometimes you need to fail. A lot of these guys have had their eyes opened. They're talking about it, saying they're probably going to start here next year. I already told them: 'you have to work hard in the offseason and be smart about it because this league is not easy.' Our future in this organization, with the consistency and amount of talent that we have, it's just a matter of time for them to understand that they've got control of the ball and bat that they hold."