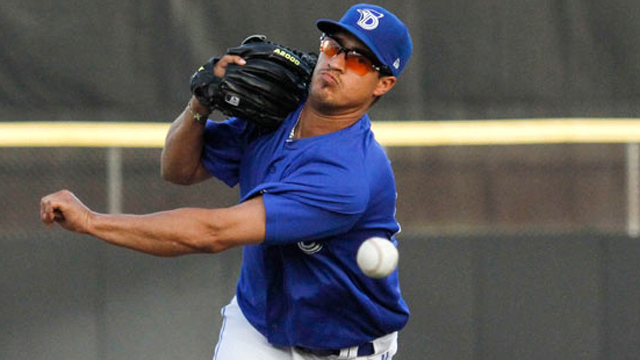 LHP Efrain Nieves held Brevard County off the board through 3.2 innings of relief in Saturday's loss in Dunedin. (Jim Goins)

For the third consecutive outing, LHP Efrain Nieves followed starter RHP Roberto Osuna (L, 0-2) with 3.2 shutout frames of relief, and has not allowed a run out of the bullpen since July 10.

LHP Griffin Murphy and RHP Hunter Carnevale held Brevard County off the board in the final two innings, but the Manatees' early surge proved to be the difference.

In the third, Garrett Cooper and Greg Hopkins led off with free passes on a hit-by-pitch and a walk. Nathan Orf sacrifice bunted the pair into scoring position and Orlando Arcia came through with an RBI single up the middle to score Cooper with the first run of the game.

After Arcia's single, Brevard County started to get crafty on the base paths. Arcia swiped second base and Tyrone Taylor roped a single to left field to score Hopkins and move Arcia up to third. With runners on the corners and Michael Reed at the dish, Taylor took off for second. When C Jorge Saez threw down to second, Arcia bolted for home. 2B Christian Lopes caught the throw from Saez and fired home, but Arcia dove past the tag and scored to give Brevard County a 3-0 lead.

The Manatees plated two more runs in the fourth inning. Alfredo Rodriguez hit a one-out single and Cooper dropped a double into left-center field to put a pair of runners in scoring position. That brought up Hopkins and the third baseman grounded a single through the left side. Both Rodriguez and Cooper scored to extend the Manatees' lead to 5-0.

Dunedin got on the board with a CF Dwight Smith, Jr. RBI groundout in the fifth, but could do nothing more offensively.

Saez produced the D-Jays lone multi-hit game with a single and double, and also threw out his 14th runner of the season. SS Shane Opitz singled in the fifth to extend his hitting streak to nine games. Dunedin's fourth hit came from 3B Gustavo Pierre, who tripled to right field in the second inning.

LHP Matt Boyd will take the hill on Sunday at 5 p.m. as the Blue Jays look to take the three game series from the Manatees.