Outburst of Scoring Fuels Dunedin to Victory in Series 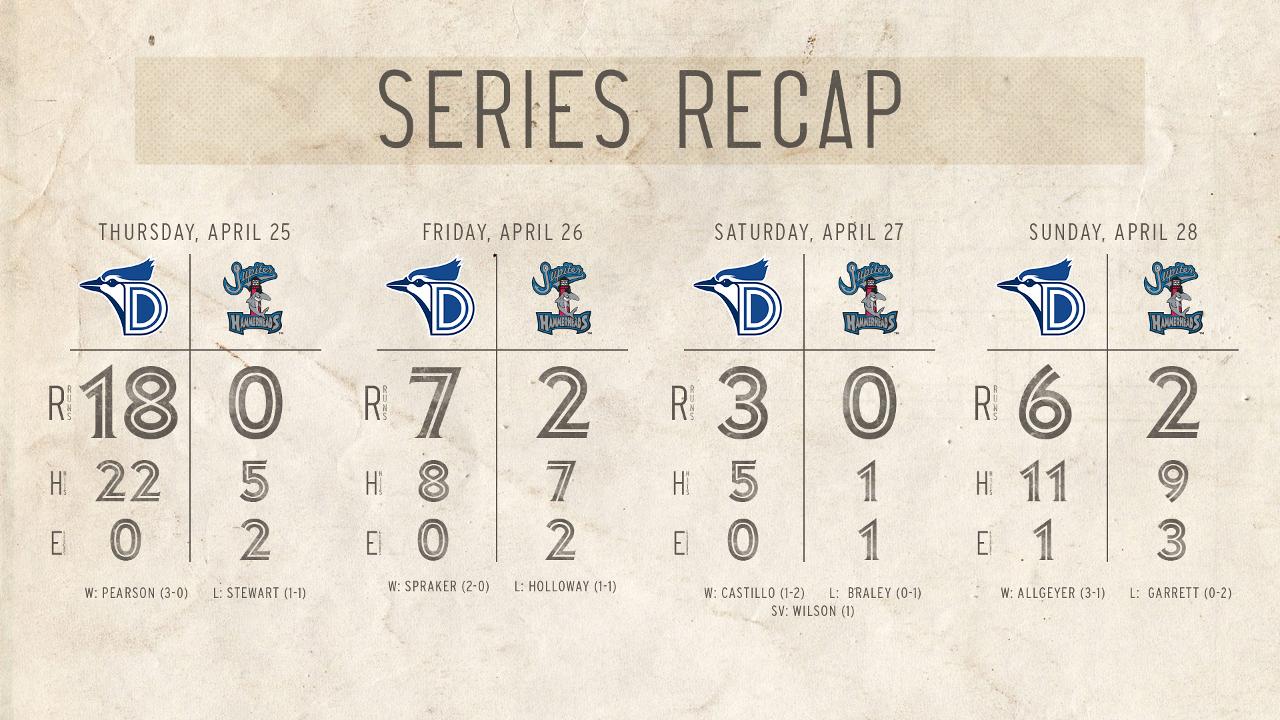 It was an offensive clinic for the Blue Jays in the opening game of the series. The Blue Jays plated 18 runs with just four coming from the long ball. It was the most runs scored since 2007 when Dunedin put up 20 against the Daytona Cubs.

The team started out quick jumping to a six run lead in the 1st inning. Cullen Large opened the scoring with a double to right field bringing in Kevin Vicuna. Ryan Noda came in with the next at-bat to double down right field with still no outs in the inning. The third double of the inning from Demi Orimoloye drove in three this time as Large, Noda, and Riley Adams came around to score. A passed ball to score Orimoloye and a walk to Samad Taylor ended the Hammerheads' starter Will Stewart's day with just one out recorded.

RHP Nate Pearson had another career outing through five innings he gave up just one hit struck out a new career high 10 batters and lowered his ERA to 0.95. He got in to a bit of a jam in the 5th after giving up a single to James Nelson and then a double to Isael Soto putting to runners in scoring position. Pearson went on to strikeout the next three batters to keep the Hammerheads off the board.

In the top of the 5th inning, Cullen Large drove in Cal Stevenson by way of a lie drive single. A Ryan Noda single in the next at-bat loaded the bases for Riley Adams. Adams promptly hit the first grand slam of the year for Dunedin off of Steven Farnwoth to extend the score to 12-0 with four innings still to play.

After adding to runs in the sixth, the Blue Jays finished the offensive explosion with four runs in the 8th. Ryan Noda drove in his third RBI of the day with a double to right field and Christian Williams got his first hit of the game with an RBI knocking in Cullen Large. Demi Orimoloye also brought in his fourth RBI of the contest with a single.

The pitching staff gave up just five hits in the game and held Jupiter to 0-6 with RISP. The staff struck out 11 batters and walked only three. Turner Larkins took over for Pearson in the 6th and only gave up two hits in his three innings of work. Altogether the team had seven players have a multi-hit game and four players had three or more RBI.

For the second game in a row Dunedin started off hot with a three spot in the 1st inning. The game started with three straight walks with the bases loaded for Ryan Noda. In just four pitches Noda took his walk to score Kevin Vicuna. Christian Williams also followed suit with a walk to score Chavez Young and after two strikeouts and a pitching change Cal Stevenson also walked to bring the score to 3-0. The Blue Jays did not put a ball in play in the inning but still saw three runs cross.

More traditionally in the 2nd inning the Blue Jays finally scored off of a Ryan Noda double for Cullen Large to score, after Large had extended his on base streak to 19 games. Heading into the 3rd inning the Blue Jays looked to keep the scoring going. Christopher Bec knocked a single to third base and two batters later Samad Taylor got a pitch to line into right field to bring home Bec after he stole second base. It was a quiet middle innings as three were just three hits through the three innings and no runner reached scoring position for either club.

Graham Spraker got his first start of the year in the contest and had a terrific outing. He went six innings, which was his longest outing of the year, and he allowed just one run on five hits. In his first start, he was able to pick up his second win of the season. The only blemish for Spraker came in the 3rd inning when he gave up a home run to Garrett Cooper on a 2-2 pitch.

Emerson Jimenez came into the game with a 5-1 lead for Graham Spraker in the 7th inning. He gave up two hits and allowed one run to score in his two innings of work, and he also struck out two. William Ouellette finished the game needing just nine pitches striking out the first two Hammerheads and then ending the game with a one pitch ground out.

Dunedin rode the spectacular performance of righty Maximo Castillo in their 3-0 victory on Saturday evening against the Jupiter Hammerheads.

Castillo surrendered a leadoff single to Jose Devers in the bottom of the first, but switched into cruise control immediately after. Maximo retired eight straight and 18 of the 19 batters he faced all game. He tossed six quality innings while striking seven Hammerheads' hitters.

The Blue Jays pushed a run across in the top of the second. Norberto Obeso reached base with two outs when first baseman Lazaro Alonso committed an error. Samad Taylor came forward to hit next and drilled a double to right to score Obeso from first to give Dunedin the 1-0 lead.

Dunedin added to the lead with two insurance runs in the top of the ninth. Logan Warmoth smacked a double to the right center gap and moved into third on Cullen Large fly out to the right fielder Isael Soto. Ryan Noda then stepped to the dish and hammered a line drive single to right to score Warmoth. After a Riley Adams walk and a Chavez Young strikeout, Norberto Obeso tattooed a line drive over the head of the center fielder Victor Victor Mesa allowing Noda to score to bring the score to it's final of 3-0.

RHP Brad Wilson registered the save in the series winner for Dunedin. In the victory, Cullen Large extended his on base streak to 19 games while Maximo Castillo picked up his first win of the year on the hill.

The final game of the series Nick Allgeyer took the mound to try and finish off the first sweep of the year for Dunedin. Allegyer kept the Hammerheads off balance early as he only gave up one hit and one walk through the first three frames.

The Blue Jays helped him out again taking the leads early for the fourth time this series. It was again the patience of the Blue Jays as they scored by way of the walk from Samad Taylor pushing across Christian Williams who had doubled to start the inning. The next inning Dunedin put the pressure on again after Riley Adams reached by way of an error. Norberto Obeso singled to left field to move Adams to second and then Demi Orimoloye continued his hot series driving in Adams with a single to right field.

RHP Nick Allgeyer was able to continue his success through the 4th and 5th innings. He gave up a double in both innings to put a man in scoring position, but he did not let either runner get further than second as he completed his day with no earned runs. RHP Kyle Weatherly would come in to try and keep things steady for Dunedin in the 6th. He worked himself into a jam with the first two Hammerheads reached base from singles. A wild pitch put both runners in scoring position and then James Nelson put Jupiter on the board with a groundout to Logan Warmoth. Weatherly controlled the damage by having the next batter groundout to end the inning.

Dunedin found themselves in a close 2-1 matchup with just three innings left. Logan Warmoth started the 7th inning with a single to center field. Ryan Noda walked with the next at-bat and then Riley Adams grounded into a double play. The hope looked lost for the inning, but a passed ball by Michael Hernandez and good base running from Warmoth brought the cushion to 3-1.

Heading into the 9th inning, the Blue Jays looked to tack on some insurance runs to give the pitching staff some breathing room for the bottom of the 9th. The bases were loaded after a Ryan Noda single followed by a Christian Williams single to left field and a Norberto Obeso walk. For the fifth time this series Dunedin scored from a walk, this time by Demi Orimoloye. The Hammerheads hen made another mistake with a wild pitch to bring home Christian Williams. The walks were not finished as the next two Blue Jays took the free pass scoring another run and extending the lead to 6-1. In total, the club walked 27 times in the four game series and have a league leading 107 BB for the year.

Matt Shannon took over the 9th inning to try and finish off the series with a win after a solid top half of the inning. It was a rough inning for team as a walk, a wild pitch, and a fielding error gave Jupiter some life, scoring Micah Brown. Jose Devers looked to start a two-out rally with a single to right field, but Shannon got Victor Victor Mesa to ground out to complete the sweep for Dunedin.

The sweep gives Dunedin a three game lead in the FSL North with another matchup against the 2nd place Tortugas beginning Tuesday at 7:05.