Dunedin Had the Giddy-Up in Doubleheader Sweep

Nick Podkul has a 4-4 night, and pitching stays sharp 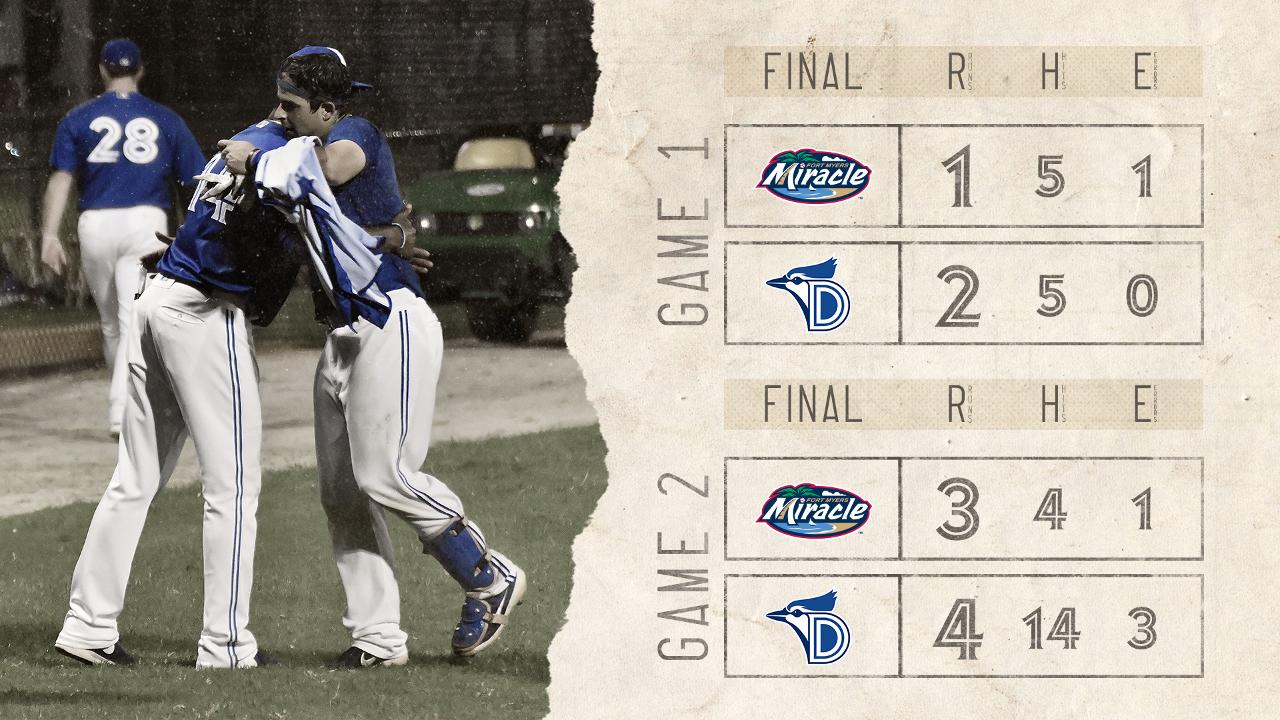 Clearwater- Dunedin picked up the series win against the Miracle winning both games of the doubleheader, and can go for season series victory over Fort Myers with win tomorrow.

The first game of the doubleheader was led by dominant pitching performances from both teams. Josh Winckowski gave up just one hit through the first five innings of work, but Jordan Balazovic kept Dunedin at bay as well. Balazovic had a no hitter through four innings, until Kacy Clemens broke it up with a single into right field. Another hit by Nick Podkul looked to set the table with two outs, but Balazovic got out of the inning unscathed.

It was the 6th inning where the runners started coming in. Gabriel Maciel doubled the left field line, and Trey Cabbage brought him home with a single up the middle. Dunedin didn't get discouraged and made a comeback in the 6th. Chavez Young started the inning reaching on an error by Jose Miranda. Alejandro Kirk laced a ball into the opposite field to put runners at the corners. Ryan Noda then knocked in another RBI with a single passed the shortstop to tie things up 1-1. Kacy Clemens then came through with another clutch at-bat this year with Dunedin driving in Christopher Bec, who ran for Alejandro Kirk.

Josh Winckowski came out for the 7th to try and get his first complete game in Dunedin, and he got the first two batters to strikeout and groundout. A couple of singles put two runners in scoring position, so Emerson Jimenez came on to try and get his third save. He only needed one pitch to get out of the jam and give Dunedin the 2-1 victory in game one.

Where game one save only ten combined hits, Dunedin put up 14 hits in game two alone. It was a bullpen game for Dunedin as Mike Ellenbest made his first start of the year. He pitched well going four innings with two runs allowed on three hits. The score was level at zero in the first three innings, but the scoring commenced in the 4th by the Miracle. A walk and a double gave Yeltsin Encarnacion his turn to drive in some runs for the Miracle. He came through with a double in the gap that gave them the 2-0 lead in the 7th inning shortened game. The Blue Jays stayed to true to what they have been all year and battled back. Samad Taylor notched his seventh home run of the year to deep right-center field. The Blue Jays would still be down, and Sean Rackoski gave up a run in the 5th by a Trey Cabbage home run, his second of the series, the only blemish on a great outing from Rackoski.

Ryan Noda came ready to add to his FSL RBI lead in the 5th, this time with a single that plated Chavez Young after Young had grounded into a fielder's choice. The Blue Jays got runners to second and third in the inning with two outs, but Kacy Clemens couldn't find another big hit. Dunedin went to the 7th needing a big hit to keep the game going. Two singles by Norberto Obeso and Chavez Young to start the inning game Dunedin the chance they needed. Ryan Noda struck again with a single driven into right field. This was Noda's 74 RBI of the year. Fort Myers did find their way out of the jam to send things to extras thanks to a strikeout by Moises Gomez.

In extras, the 8th inning went quietly as both teams couldn't get a run across in the inning even with the runner starting on second base. The fireworks came in the 9th for an exciting finish. Kyle Weatherly recorded a rare two-pitch inning thanks to getting Brian Schales trying to reach third on an infield hit by Andrew Bechtold. The very next pitch Ernie De La Trinidad ended the inning with a double play. After a good piece of hitting by Chavez Young to move Norberto Obeso to third with one out, the Miracle walked the dangerous Ryan Noda to try and get Christopher Bec out instead. Bec made Fort Myers regret their decision with a deep fly ball over the left fielder's head to walk the game off and give the Blue Jays the win.

The season series ends against Fort Myers tomorrow at 6:30 at Jack Russell Stadium with Simeon Woods Richardson on the bump.