Fayetteville Comes From Behind, Evens Series with Potomac 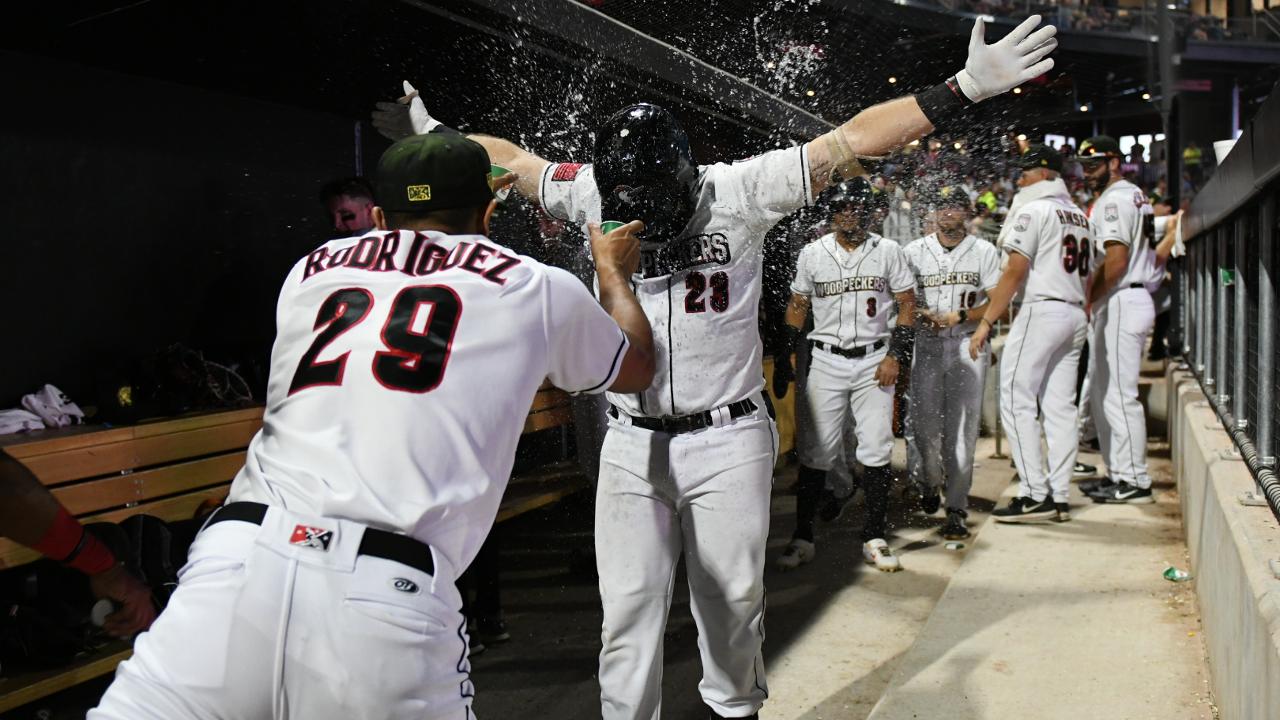 The Fayetteville Woodpeckers found themselves down three runs to the Potomac Nationals going into the bottom of the fifth inning at Segra Stadium. The Woodpeckers loaded the bases for Jake Adams, who smoked his second grand slam of the year to give Fayetteville a lead it would not surrender. Shawn Dubin was lights out in relief, pitching five scoreless innings and striking out seven of the last nine batters he faced to preserve a 6-4 Woodpeckers win on Friday night

Woodpeckers' starter Austin Hansen made his Segra Stadium debut by sending down the Nationals in order in the top of the first inning. The Fayetteville offense immediately added some cushion for Hansen, tacking on a score in the bottom of the frame. Jacob Meyers led off with a stand-up double that bounced in right center field and then came home off a sacrifice fly from Colton Shaver.   The tally made it 1-0 Fayetteville off Potomac starter Carson Teel (2-1) and was also Shaver's 33rd RBI on the season.   Hansen picked up where he left off in the bottom of the second going three up, three down once again, but the top of the third finally saw the Nationals get a runner aboard against the Woodpeckers hurler. Hansen retired Osvaldo Abreau to start the frame, bookending five straight strikeouts for the recent Quad Cities' call up. The next Nationals batter Jakson Reetz reached after Colton Shaver committed a fielding error at third base for the first Potomac base runner of the game. Armond Upshaw popped up in foul territory for out number two, but Gage Canning smashed a triple to right field that scored Reetz and tied the game at one apiece. Hansen ended the frame by forcing a ground out from Aldrem Corredor, but the Potomac score meant it was a clean slate for both teams heading into the bottom of third.

Teal continued to deal in the bottom of the third and bottom of the fourth, giving up two hits and walking just one in two scoreless frames. Meanwhile the Potomac offense tacked on three more runs in the top of the fourth to put the Nationals in control of the game. Telmito Agustin kicked things off in the fourth frame by drawing a base on balls, followed by another walk from KJ Harrison to put two runners on right away for Potomac against Hansen. The Nats racked up back-to-back singles with still no outs, the first from Bryan Mejia that loaded the bases for Osvaldo Abreau.   The Potomac shortstop spliced a two RBI base hit that scored Agustin and Harrison making it 3-1 Nationals. Hansen finally got an out in the inning retiring Jackson Reetz but Armond Upshaw drove in Mejia on a 1-3 ground out that ensured the Nats were up three runs after three and half innings of play. The Woodpeckers made a pitching change in the top of the fifth sending out Shawn Dubin (2-3) to finish out the night on the mound for Fayetteville. Dubin walked Cole Freeman to start his relief outing, but then retired the next three batters he faced to leave the runner stranded. The Woodpeckers bullpen arm kept the 4-1 score heading into the bottom of the fifth, with the Woodepckers offense tasked with making an epic comeback.

The back half of the fifth frame started with a base hit from Miguelangel Sierra, his second single of the night. Teal was able to retire Jacob Meyers but then gave up another single to Michael Papierski on the next at bat. The Woodpeckers loaded the bases after Colton Shaver drew a walk, making Jake Adams the go-ahead run at the plate.   The Fayetteville slugger stepped into the batter's box and blasted a shot over the left field wall, giving the Woodpeckers a 5-4 lead with one crack of the bat. Adams' grand slam was his second of the season and the teams sixth total. Teal sent down the next two batters he faced, but the damage was done as Fayetteville came back from a three-run deficit to take the lead. Now in line for a win on the mound, Shawn Dubin locked in only allowing three base runners from the seventh inning on, two of which were because of defensive errors.   The Woodpeckers offense tacked on an insurance run to help Dubin out in the bottom of the eighth.   Against Potomac reliever Aaron Fletcher, Marty Costes drew a one out walk to put a runner on for Fayetteville.   The next Woodpeckers batter in Scott Manea flew out to center field, making it two gone. Thinking there were three outs Nats' center fielder Upshaw threw the ball into the stands, by rule this allows the runner to advance two bases, putting Costes at third.   Marty came home on the next at bat after a wild pitch flew into the backstop, making it 6-4 off of no hits in the frame.   Dubin continued his stellar performance to seal the deal for Fayetteville into the bottom of the ninth. Overall the Woodpeckers hurler threw five innings of scoreless ball, allowing just one hit and striking out eight propelling Fayetteville to a 6-4 home win.

The Woodpeckers move to 30-37 on the year while Potomac falls to 29-36. Fayetteville picks up its second win against the Nationals this year and their first win on Friday night this season.   The Woodpeckers look to take control of the series tomorrow in game three.   JP France is set to take the mound for the Woodpeckers with first pitch set for 6:00pm.