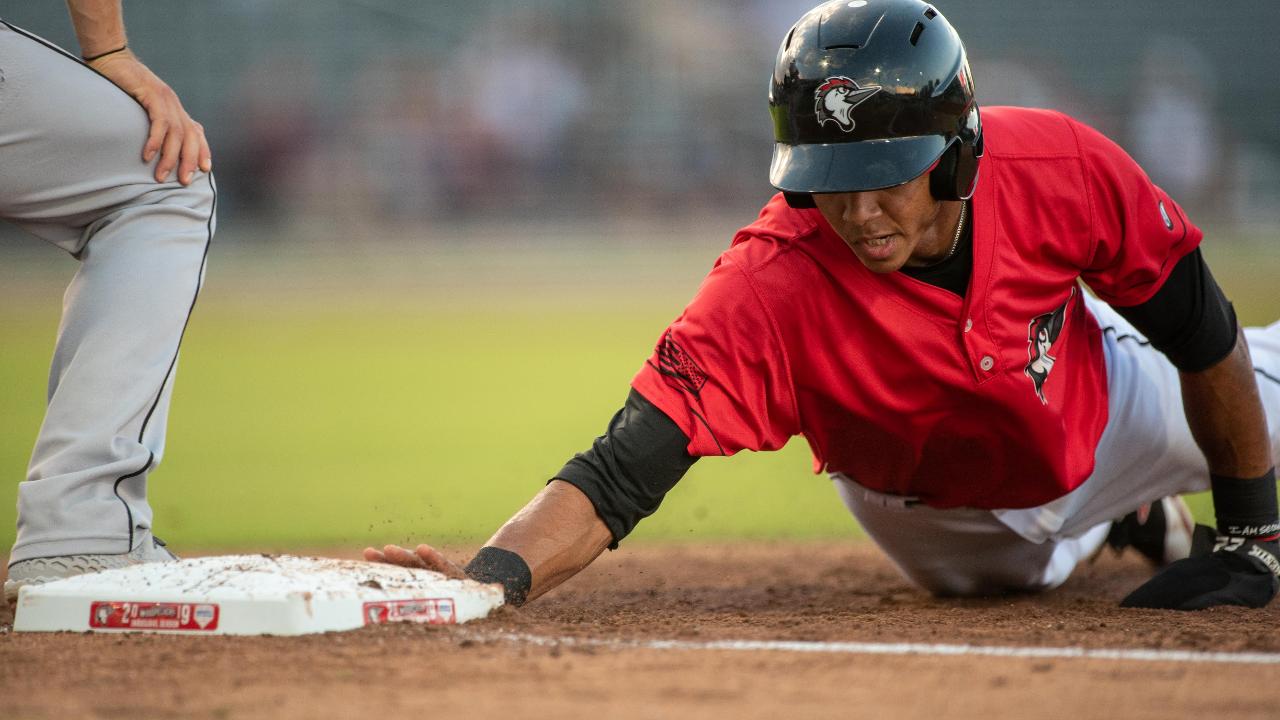 The Fayetteville Woodpeckers went back and forth with the Winston-Salem Dash for the first three innings of play, but a four run top of the fourth inning cemented a lead for the Dash they'd never waiver. The Woodpeckers knocked on the door of a rally multiple times, with the team notching five doubles, including two RBI two-baggers off the bat of Jeremy Pena. The Woodpeckers got within two thanks to a RBI from Michael Papierski, but a pair of runs by Winston-Salem in the top of the seventh, followed by three rain delays and the game being called in the bottom of the 7th solidified an 8-5 Dash victory at Segra Stadium.

Cody Deason made his debut on the mound for the Woodpeckers, pitching the first two innings without allowing a hit. The Woodpeckers offense struggled to strike against Winston-Salem starter Konnor Pilkington in the first two innings as well, with the Dash pitcher stranding Corey Julks in scoring position in the first and Jonathan Arauz on first in the second. It was the Dash who finally put a run on the board in the top of the third inning, doing so without knocking a run against Cody Deason. JJ Muno started the frame by drawing a base on balls to but the go ahead run on the base paths, then swiping second for his 10th stolen base of the year. Deason sent down the next two batters he faced, but Muno continued moving thanks to a wild pitch that put a score 90-feet away. With Mitch Roman at the plate and two gone Muno came home because of a balk by the right-handed hurler that put Winston-Salem up 1-0. Deason sent down Roman by forcing a groundout, but the Dash had secured a slight lead going into the bottom of the third.

In the bottom of the third Fayetteville responded right away, starting with a leadoff walk drawn by Scott Manea. The Woodpeckers DH came home to tie the game when Jeremy Pena notched his second RBI with Fayetteville thanks to a double on a line drive to right field. The game now knotted at one apiece Konnor Pilkington settled in, sending down the Woodpeckers in order to limit the damage going into the top of the fourth. Steele Walker started off the Dash's bid to regain the lead in the top of the fourth, roping a leadoff double. Deason then retired Jameson Fisher and Zach Remillard for two outs, but followed by walking Craig Dedelow to put two on for Carlos Perez. The Winston-Salem catcher laced a ball to right field that scored Steele Walker and made it 2-1 Dash with still two runners on. The next batter is JJ Muno stepped to the plate and crushed a triple into the corner in right field, scoring Craig Dedelow and Carlos Perez. Trying to throw Muno out taking third Woodpeckers' shortstop Jeremy Pena overthrew Jonathan Arauz at third, allowing for Muno to run home and tally the third run on the play. The triple and the miscue helped Muno reach 26 RBIs on the year and suddenly made it 5-1 Dash heading into the bottom of the fourth inning.

The Woodpeckers offense could not take advantage of a leadoff double from Chandler Taylor in the bottom of the frame as Pilkington pitched another scoreless inning. The top of the fifth saw Fayetteville make a pitching change, calling on Leovanny Rodriguez for the 26th time this season to make a relief appearance. The Woodpeckers' bullpen arm quickly gave up a double to Tyler Frost and a single to Mitch Roman, allowing for Steele Walker to launch a sacrifice fly to right center that scored Frost. It was the 30th RBI on the season for Walker and stretched the lead to five runs for the Dash. Thanks to a 2-6 caught stealing from Michael Papierski to Jeremy Pena that threw out Roman and a Jameson Fisher groundout, Rodriguez limited the damage to just one score in his first inning of work. The Woodpeckers offense started to show some life in the bottom of the fifth, with Scott Manea rocketing another leadoff double and then came home thanks to Jeremy Pena again who crushed a two-bagger of his own. Corey Julks joined the party by singling on a line drive to center field, allowing Pena to turn on the jets and cross home plate. Julks notched his 25th RBI on the year but was thrown out trying to take and extra base for one gone in the frame. Pilkington retired Jacob Meyers and fanned Jake Adams to stop the Fayetteville rally short, sending the game into the sixth inning with the Woodpeckers trailing 6-3.

Leovanny Rodriguez sent the Dash down three up, three down in the top of the sixth to keep the Woodpeckers within three. Winston-Salem made a pitching change, substituting Luis Ledo on the mound which worked out well to start as the reliever immediately fanned Chandler Taylor to put one away int he bottom of the sixth. Jonathan Arauz reached on a single, and after a rain delay Miguelangel Sierra knocked a base-hit of his own. Michael Papierski smacked the third straight single to score Arauz and make it 6-4 Fayetteville. Migelangel Sierra was thrown out trying to take third on the hit and Papierski advanced to second on the throw. With two outs, Papierski in scoring position and Scott Manea up at the plate the game went into another rain delay. After about a half an hour play resumed with Jake Elliot now pitching, Scott Manea struck out to keep it a two run game heading into the 7th.

Joey Gonzalez took over for Rodriguez in the top of the seventh as the Woodpeckers new hurler, but gave up back-to-back singles to JJ Muno and Yeyson Yrizarri and then walked Tyler Frost to load the bases with nobody out. Mitch Roman drew a base on balls that scored JJ Muno to make it 7-4 with that RBI walk from the Dash second basemen. Another run was tallied by Winston-Salem thanks to the second RBI on the night from Steele Walker, who brought home Yrizarri on a fielder's choice that forced out Roman. Now up 8-4 Dash batter Jameson Fisher flew out to Jacob Meyers in center, then prompting the Woodpeckers outfielder to snipe Frost trying to come home, ending the frame and stopping another score. The bottom of the seventh saw Jeremy Pena open with a single, followed by a walk from Corey Julks. Meyers hit into a fielders choice and swapped spots with Julks, moving Pena to third. Jake Adams drove in Pena with a sacrifice fly to right center, slicing the Dash lead to three. Jake Elliot then got Taylor to strike out to end the frame and keep the score 8-5 heading into the final two innings. Gonzalez sent the Dash down in order in the top of the seventh, but due to bad weather the game was called with Winston-Salem snagging an 8-5 road win. Fayetteville drops to 5-7 against the Dash this year and 41-49 on the year. The Dash are now 10-12 in the second half, as their victory sets up a rubber match at Segra Stadium tomorrow. First pitch is set for 7:00pm.