Fayetteville Pours on 10 Runs to Even Series with Salem 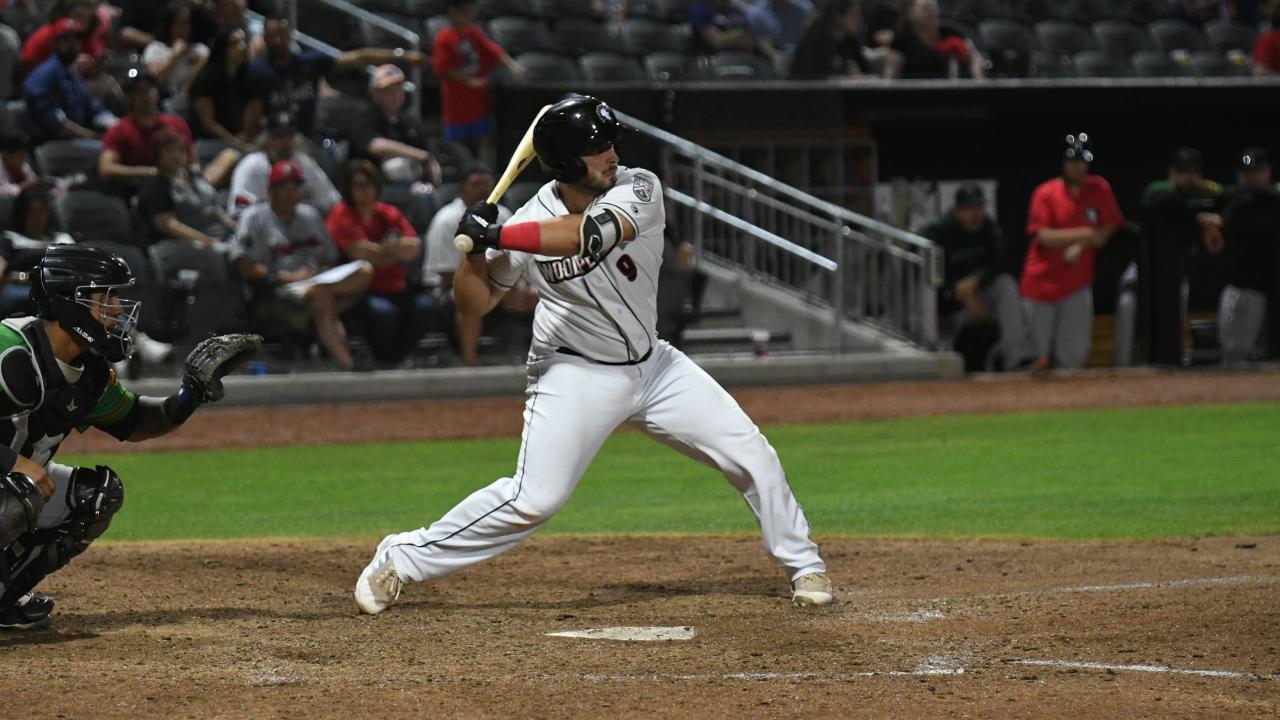 Fayetteville scored double digit runs in the first four frames and every member of the lineup reached base in the Segra Stadium victory. The 'Peckers racked up ten hits, as eight different players scored a run on Tuesday. The game was highlighted by a 3-for-4 night from Corey Julks and a three RBI day for Scott Manea that cemented a 10-8 win for the Woodpeckers over the Red Sox.

The Woodpeckers offense started the game on a high note with a four run bottom of the first inning. For the 11th time this season Bryan De La Cruz began the game by getting on base, drawing a walk against Salem starter Jhonathan Diaz (2-3). The Salem southpaw struck out both Jacob Meyers and Jake Adams to put two away as Colton Shaver stepped to the plate. The Fayetteville third basemen patiently earned a walk of his own to put two runners on for Corey Julks. The Houston product knocked a single and his 14th RBI to left field that scored De La Cruz and put Shaver in scoring position at second. Michael Papierski then loaded the bases after getting hit by a pitch from Diaz that put Scott Manea in a good spot to make some noise. The Woodpeckers DH did just that, crushing a two RBI base-hit that allowed both Shaver and Julks to cross home plate. One more run would come home for Fayetteville as Diaz sailed a wild pitch behind Salem catcher Nick Scirotino that allowed Michael Papierski to race in for the 'Peckers fourth run. Fayetteville finished the frame up 4-0 on just three hits, and only continued to build on the lead in the bottom of the second. Once again the Woodpeckers loaded the bases in the next frame, thanks to an opening walk from Miguelangel Sierra and back-to-back singles from De La Cruz and Meyers. Jake Adams added his first RBI of the night skying a fly ball to right field that allowed Sierra to score on the out. That run put the Woodpeckers up 5-0 after just two frames of play.

Fayetteville starter Yohan Ramirez faced the minimum through the first two scoreless innings. The top of the third got a little bumpy for Ramirez as he walked back-to-back Salem batters to start the frame and then hit Jagger Rusconi with a pitch. That put a player on every bag for Jarren Duran who holds the best batting average in all of minor league baseball. Duran sliced a single on a line drive to left field that scored two runs and cut the lead to three for Fayetteville. The Red Sox got with in two after a high fly ball from Pedro Castellanos brought in Rusconi and made it 5-3 Woodpeckers going into the bottom of the third.

The Woodpeckers continued to put on a offensive clinic in the bottom of the third tacking on three more scores. Alfredo Angarita earned a base-hit with one out, followed by a walk from De La Cruz. Jacob Meyers cleared the bases with an RBI double to left field that scored both Angarita and De La Cruz. The Woodpeckers added yet another score when Jake Adams roped a single that brought home Jacob Meyers to make it 8-3 after three frames of play. The Woodpeckers offense just couldn't stop scoring going into the bottom of the fourth. Fayetteville's Scott Manea laced a double that brought home Papierski and made it a 3 RBI day for the 'Peckers slugger. Manea himself came home when Sierra roped an RBI single off of Salem reliever Alex Demchak that made it 10-3 Fayetteville on top.

The Rex Sox tried to muster up a comeback down seven going in to the top of the fifth. With Yohan Ramirez still on the mound for Fayetteville the Red Sox slowly chipped away after a leadoff single from Jagger Rusconi, a walk from Duran, and a hit by a pitch on Hernandez loaded the bases with nobody out. Castellanos bounced a grounder to Sierra but the shortstop couldn't corral it, so an E6 allowed both Rusconi and Duran to score. That ended the day for Yohan Ramirez, as the Woodpeckers brought in reliever Tommy Dejuneas (1-1) to try and finish out the frame. Ryan Fitzgerald immediately smacked a line drive to right field that scored Hernandez but Bryan De La Cruz used his stellar arm in the outfield to throw out Fitzgerald trying to take an extra base. The final run of the inning came through on a sacrifice fly from Victor Acosta that brought in Pedro Castellanos and cut the Fayetteville lead to just three.

After a combined 17 runs in 4 and 1/2 innings neither team could muster up any more offense until the top of the 9th. Tommy Dejuneas did not allow a run to his name in three innings pitched for the Woodpeckers. Red Sox reliever Eduard Bazardo also made a solid appearance in relief, pitching three and 1/3 innings of scoreless ball. Salem would add another score in the top of the ninth against the second pitcher out of the Woodpeckers bullpen, Willy Collado. The score was too little too late, as the Collado struck out Ryan Fitzgerald to secure a 10-8 Woodpeckers win.

Fayetteville ends a three game skid and evens the series with Salem at one apiece. The Woodpeckers bump their record to 17-21 while the Red Sox fall to 15-21 on the year. Game three of a four game tilt is set for tomorrow at Segra Stadium. First pitch is set for 7:00pm.