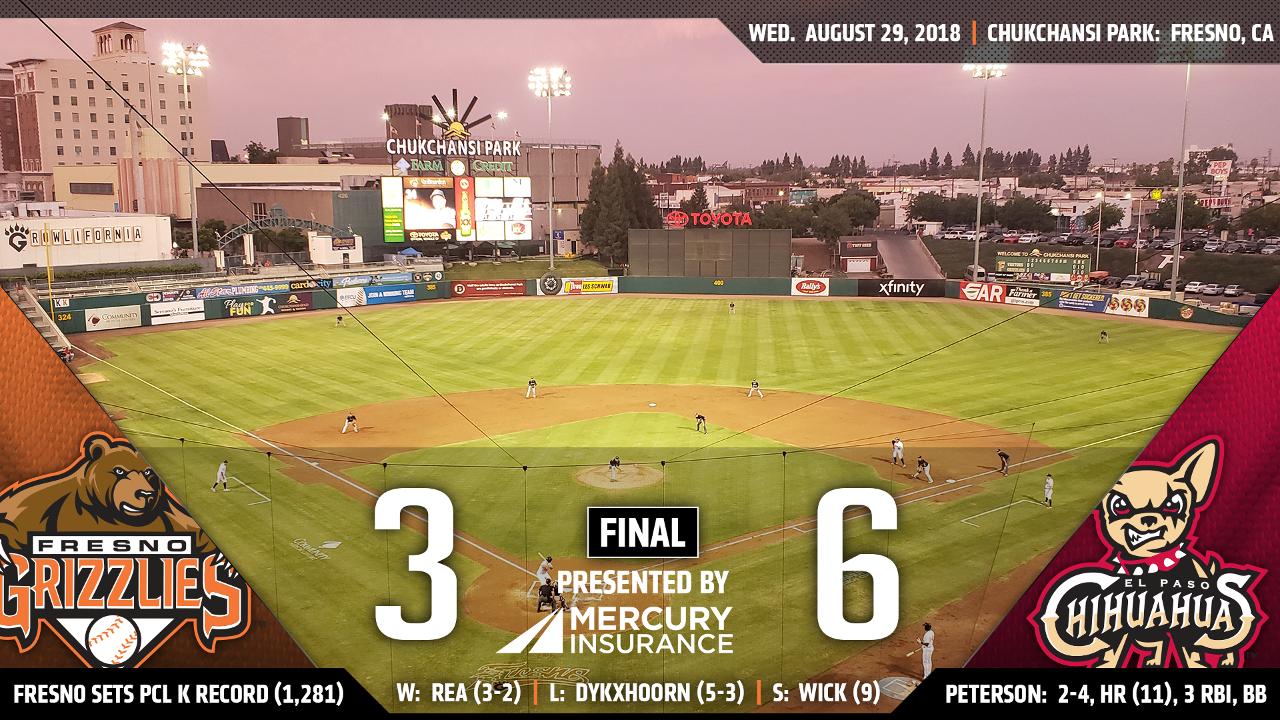 Despite breaking the PCL-record for most strikeouts by a staff in a single-season, the Fresno Grizzlies (78-56) fell to the El Paso Chihuahuas (80-54) 6-3 Wednesday night from Chukchansi Park. In the top of the eighth, reliever Dean Deetz set down Auston Bousfield, securing punchout number 1,278. That would allow Fresno to set a modern-era league record held by the 2017 Oklahoma City Dodgers. The team is on pace to fan 1,329 hitters in 2018. Deetz whiffed a season-high five batters in two shutout frames. On the evening, the Grizzlies combined to strike out 12 Chihuahuas, expanding the total to 1,281.

An 11-hitter top of the sixth put El Paso up 6-0. Ty France spanked a single to left, knocking in Forrestt Allday (2-for-5). Then, Shane Peterson (2-for-4) clobbered a pitch over the batter's eye in center field. The three-run shot was his 11th of the season. Raffy Lopez ended the scoring with a triple to the right field wall, adding a pair.

Fresno cut the deficit to 6-3 in the bottom of the eighth. A bases-loaded walk to Jack Mayfield allowed Alex De Goti to trot home. Then, Nick Tanielu lined a double to left, plating Drew Ferguson (2-for-5) and Kyle Tucker (2-for-4). De Goti extended the current team-high hit streak to eight games. While the multi-hit night by Tucker pushed his streak to seven. In the span, he is 17-for-32 (.531) with seven homers.

With a three-run advantage, Rowan Wick buckled down and hurled a scoreless ninth, notching his ninth save and a 6-3 Chihuahuas victory. Colin Rea (3-2) was honored with the win. He went five innings, scattering three walks and a hit while whiffing three. On the other side, Brock Dykxhoorn (5-3) suffered the defeat. He was charged with five runs on seven hits, one walk and four punchouts in five and one-third frames.