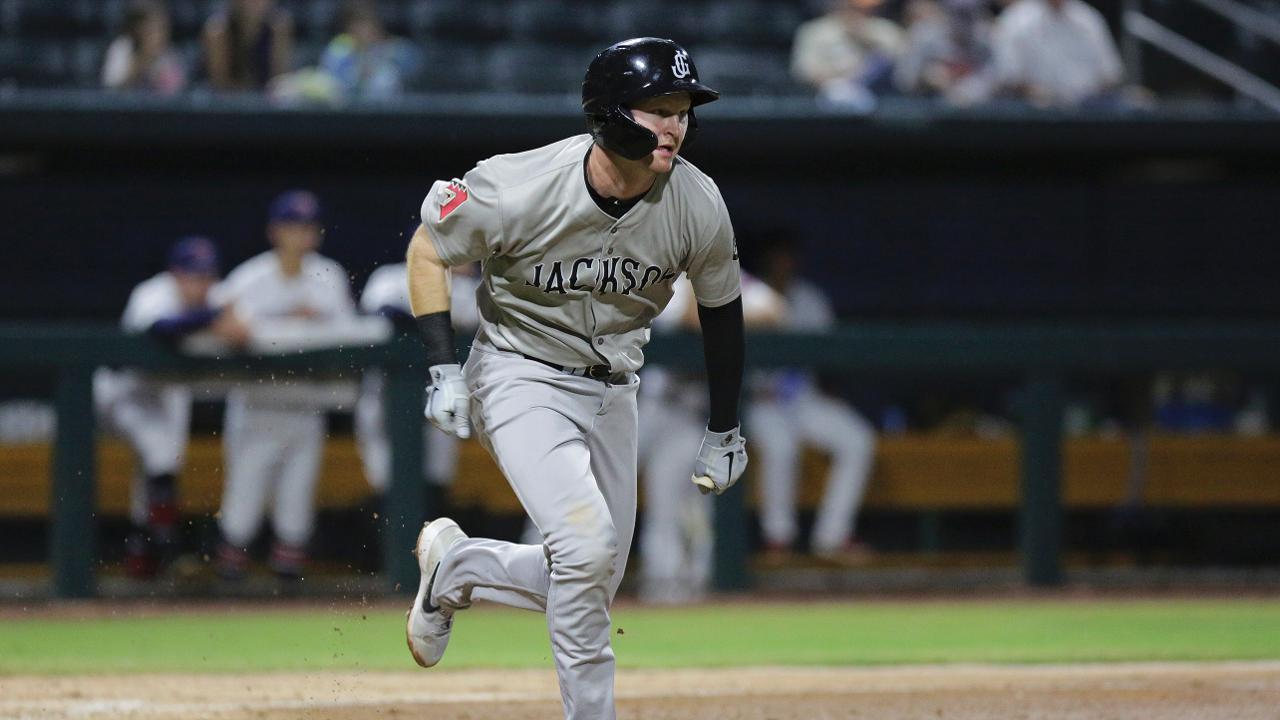 Jackson, Tenn. - The Jackson Generals, the Double-A affiliate of Major League Baseball's Arizona Diamondbacks, took two games from the Tennessee Smokies on Wednesday, winning the resumption of a suspended game 2-0 before pulling off a comeback victory, 7-3, in the nightcap at The Ballpark at Jackson.

The Generals and Smokies resumed their suspended game in the top of the fourth, and the scoreless tie remained as such for two innings, as Jackson's Cole Stapler and Tennessee's Michael Rucker (0-3, 4.11 ERA) each kept the other side scoreless through the fourth and fifth innings. Jayson McKinley (2-0, 2.25 ERA) took over for the sixth inning and threw a scoreless top half before Rucker went back out to work the sixth. Rucker got the inning's first two outs on 11 pitches, but at that point, 44 pitches into his appearance, Generals outfielder Seth Beer had a different idea. Beer swung at the first pitch from Rucker and sent his first homer as a General past the right field fence, drawing the Generals into the lead at 1-0. Beer's 26th home run of the season would be followed one inning later by a two-out RBI single from Ryan Grotjohn that drove in Camden Duzenack for a 2-0 Jackson lead.

For the first time in 2019, the Generals won a nine-inning contest 2-0, recording their 14th shutout of the season while securing the series victory against the Smokies. Ryan Atkinson picked up his tenth hold of the year with a scoreless eighth inning, and Miguel Aguilar (S, 6) secured his sixth save, giving him the most combined saves and holds (13) in the Southern League since June 1. Pavin Smith was the only General with a multi-hit game, going 2-for-4 with a pair of lead-off doubles that ended up stranded. Jackson went 1-for-13 with men in scoring position, while Tennessee finished 0-for-7.

In the second game, Jackson's Jeff Bain and Tennessee's Erich Uelmen stranded multiple runners across the first and second innings before things went off-script. With one out in the top of the third and runner Zack Short standing on third base as the potential go-ahead run, Bain induced a ground ball to shortstop Galli Cribbs Jr. in a drawn-in position. Cribbs threw home to put Short in a pickle between third base and home plate, and the Jackson defense executed the rundown well, with Ramon Hernandez tagging out Short for the inning's second out as Eddy Maritnez (who hit the ground ball) raced to second base. However, Jackson catcher Daulton Varsho was ruled to have committed an obstruction against Short as the runner attempted to reach home plate, leading to Tennessee being given the game's first run for a 1-0 advantage.

Two batters later, a two-out RBI double from Ian Rice plated the Smokies' second run for a 2-0 lead. They grew the lead to 3-1 in the fourth inning when Jared Young hit an RBI double that scored Connor Myers. If it hadn't been for a tremendous relay throw from Jeffrey Baez in right field to home plate that ended the inning on a tag play, it could have been much worse.

The Generals responded immediately, led by Varsho, who swatted his 17th homer of the year in the third with a solo shot to left-center field in the third. Varsho singled to lead off the fifth inning, and Pavin Smith followed him by drilling a two-run shot over the wall in right-center field that brought the two teams square at 3-3. The Generals' surge would eventually chase Uelmen from the hill, with Jordan Minch (5-5, 4.96 ERA) finishing the inning. In the sixth, the Generals batted around against Minch, featuring a leadoff triple by Galli Cribbs Jr., an RBI single by Varsho, a sacrifice fly from Ramon Hernandez, and an RBI hit by L.T. Tolbert that eventually led to a 7-3 Jackson lead. West Tunnell put the wraps on the victory, tossing a scoreless inning to make sure Sam Lewis (3-3, 2.53 ERA) got the win for two scoreless innings of relief.

The Generals are home through Thursday evening, which will be a Leaders Credit Union Dollar Night with $1 tickets, $1 hot dogs, $1 soft drinks, $1 popcorn, and $1 beer available for of-age customers. In addition, the Generals will give away two pairs of tickets to upcoming college football games during Thursday night's contest, raffling off seats to Ole Miss-vs.-Memphis in Memphis, and Georgia-vs.-Vanderbilt in Nashville, both scheduled for Saturday, August 31. Additionally, the Chicago Cubs have been widely reported to be sending former World Series MVP Ben Zobrist on a rehab assignment to Thursday's game, where he is likely to be in the starting lineup for the Smokies.