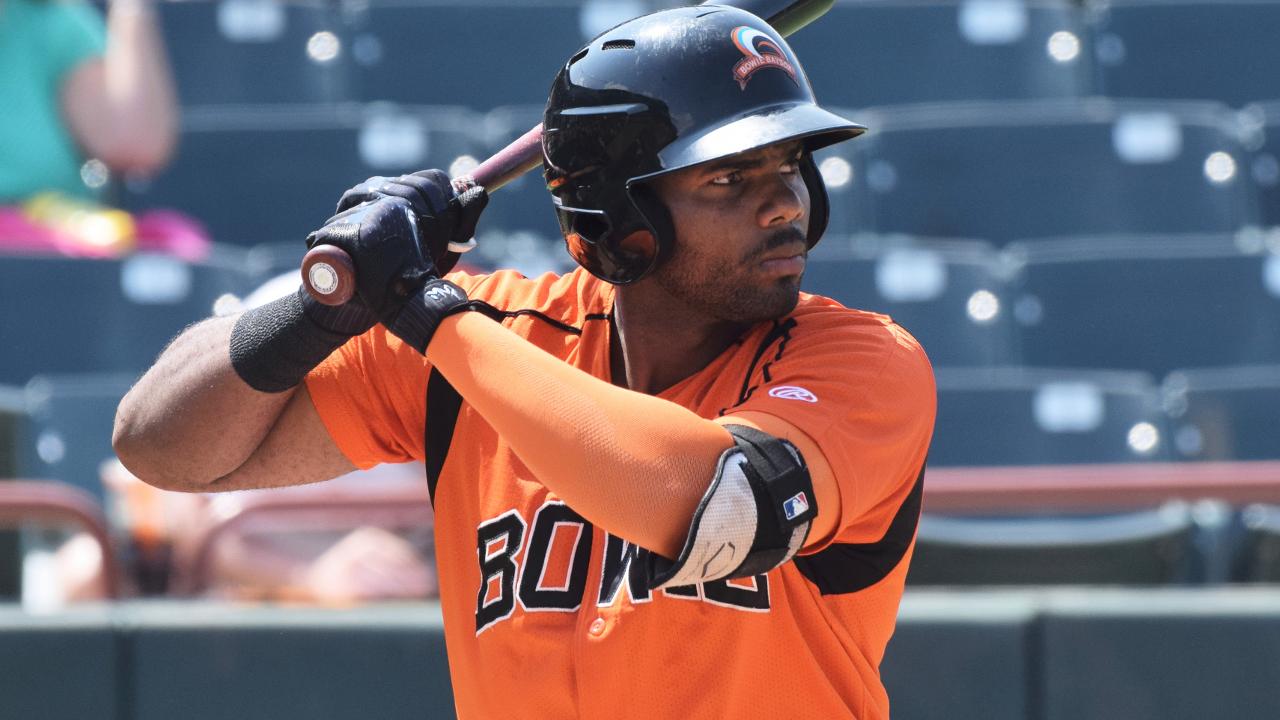 Aderlin Rodriguez's previous high for RBIs in a game was six, set on April 25, 2014. (Patrick Cavey/MiLB.com)

Although a traditional baseball game lasts nine innings, Aderlin Rodriguez did something in seven frames on Wednesday that no one had done in Double-A Bowie's 24-year history.

The Orioles farmhand drove in a team-record nine runs with a pair of homers and three singles as the Baysox took the opener of a doubleheader against Reading, 12-5, at First Energy Stadium. Rodriguez eclipsed the previous record of eight RBIs in a game, a feat accomplished most recently by Ronnie Welty on Aug. 23, 2012.

"I have had the opportunity before, but I have never done anything like I did tonight," Rodriguez said. "It was a good feeling to help my team win."

"The last couple games, me and [hitting coach Butch Davis] have been working on just trying to get good pitches to hit and making sure that I don't miss it," Rodriguez said. "I think that today was a good day. I got some well-hit balls, I got on base and I think that was all."

The eight-year veteran came up with runners on second and third and two outs in the first inning against Reading starter Tyler Viza and delivered a two-run single to right field. Facing Viza again in the second, he picked up another two-out RBI with a base hit up the middle. The Baysox scored five runs with two outs in the victory, all of which came in the first two innings.

"I think it was all about staying focused," Rodriguez said. "I think that was a key. It was keep grinding in our at-bats as a team and everything comes."

Rodriguez got ahead of Viza, 2-0, with one out in the fourth and lifted a two-run homer over the left-center field fence to give the Baysox a 7-2 cushion. Viza gave way to John Richy, who surrendered a three-run blast to Rodriguez in the sixth.

It was the ninth career two-homer game for the native of the Dominican Republic and his first since July 10 of last season with Class A Advanced Frederick.

Rodriguez took an interesting route to his record-breaking ninth RBI. Facing Richy with runners on the corners and two outs in the seventh, he caught a 1-0 pitch with the end of his bat and hit a perfectly placed dribbler just beyond the mound that allowed Stephen Wilkerson to score.

Stewart, the Orioles' No. 22 prospect, had a pair of singles and a pair of runs scored and Rosa doubled twice and singled, scoring four runs and driving in a pair. Jay Gonzalez added three hits in three at-bats for Bowie.

Angelo Mora homered, doubled and singled, driving in one run and scoring another for Reading. Phillies No. 11 prospect Scott Kingery went 2-for-4 with an RBI and a run scored and Osmel Aguila was 3-for-3 with a homer and two runs scored.

Rodriguez did not fare as well in the nightcap, a 4-0 loss for the Baysox. He went 0-for-3, striking out once and bouncing into a double play.

The Fightin Phils got their offense on back-to-back homers from Mitch Walding and Kyle Martin in the fourth and an RBI single from Brock Stassi in the fifth. Reading starter Mario Sanchez (3-1) yielded three hits over six innings, walking one and striking out three.