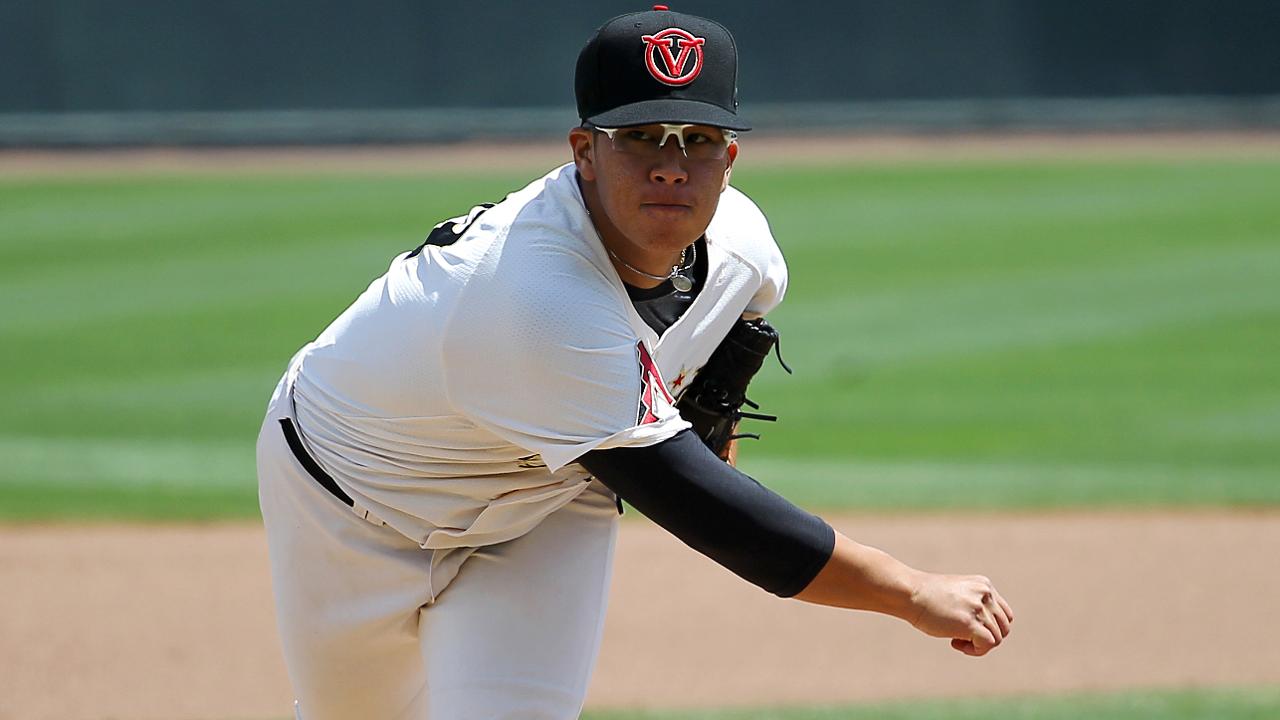 As the California League playoff race has begun to heat up, so has Bo Takahashi.

The D-backs prospect took a no-hitter into the eighth inning on Friday as Class A Advanced Visalia blanked Modesto, 5-0, at Recreation Park. He ended up allowing one hit and two walks while striking out six over eight innings in matching the longest outing of his career.

Takahashi (7-9) faced the minimum over the first five frames. He worked around a two-out walk to Logan Taylor in the sixth, then retired the side in order in the seventh to keep the no-hit bid alive.

"My fastball, slider, breaking pitch, changeup -- everything was working," the 20-year-old said. "I just was throwing with my catcher, Tyler Baker. I want to thank my teammates, too, because they had my back [defensively]."

Takahashi fell behind, 2-1, against Donnie Walton leading off the eighth before the Nuts shortstop grounded a fourth-pitch fastball up the middle to spoil the no-hitter.

"I just made a pitch and my fastball went down the middle," Takahashi said. "Unfortunately, he got a hit and the no-hitter was gone."

The native of Brazil bounced back to retire the next three batters and complete his first scoreless outing since the beginning of June. He was replaced by Yoan Lopez to start the ninth.

Takahashi, who also went eight innings in a 4-3 win at San Jose on June 15, lowered his ERA with the Rawhide to 4.50. Despite falling short of a no-hitter, he said he did not feel any disappointment.

"I just wanted my team to win because we are fighting for the playoffs right now," the 6-foot right-hander said. "So if my team is winning, then I'm happy. I just want to help my team get into the playoffs and [win] the championship."

Visalia has a one-game lead over Modesto, San Jose and Stockton in the battle for the California League North Division second-half title.

• Get tickets to a Nuts game

Although Takahashi allowed 16 runs over 12 1/3 innings in his first three starts in August, he's turned up the intensity with the playoffs looming. After Friday's gem, he's yielded two runs on five hits with nine strikeouts over 13 frames in his last two outings.

"Every game, when I go to the mound, I pitch thinking it's my last game of the year and I try to do everything I can," Takahashi said. "I try to do my best every pitch, try to throw strikes and get out of innings.

"It's always great to pitch good and see you're team winning, too."