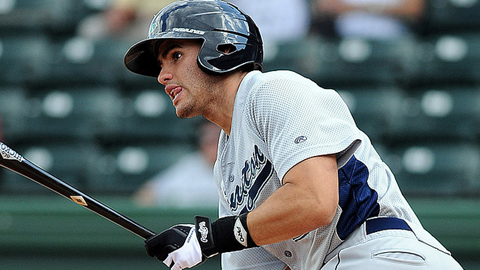 This offseason, MiLB.com will be honoring the players -- regardless of age or prospect status -- who had the best seasons in their organization. We're taking a look at each team to determine the outstanding seasons in Minor League Baseball. Select a team from the dropdown below.

For Astros fans, there wasn't a lot to smile about this year.

Roy Oswalt and Lance Berkman departed, slugger Carlos Lee finished with fewer than 25 homers for the first time since coming to the organization and the Astros ended up with a 76-86 record.

Young talent like Brandon Barnes, Kody Hinze, Marcus Nidiffer and Douglas Arguello, though, means better days are likely ahead. From the Gulf Coast League to the Pacific Coast League, the Astros got big numbers from highly touted prospects and surprise performers alike.

Catcher -- Chris Wallace, Greeneville (47 games), Tri-City (20 games): The Astros selected four catchers in the first 20 rounds of this year's Draft, and two were exceptional in their first pro seasons. Fifth-rounder Ben Heath played his way all the way up to Double-A, wihle Wallace -- a 16th-rounder -- ranked in the top 10 in batting in the Astros system and the Appalachian League, where he spent most of the summer.

First base -- Marcus Nidiffer, Greeneville (48 games), Tri-City (21 games): The Astros grabbed Nidiffer after he went unsigned in the Draft, and he turned out to be a big-time producer during his debut season. The right-handed hitter posted a .372 on-base percentage while slugging .535 across two short-season levels, belting 14 homers in 69 games.

"Sometimes opportunities come for players unexpectedly and they can either take advantage of them or they fail," Astros field coordinator Dick Scott said. "He was brought in to fill a hole, recognized this was his chance and definitely got our attention. He hit well and hit for some power.

"He was asked to play first base, which he had never played before prior to arriving in the organization. He possesses a strong work ethic and a desire to continue proving he belongs."

Nidiffer went yard once every 15-bats to rank second in the Appy League.

Second base -- Jose Altuve, Lexington (94 games), Lancaster (31 games): Altuve's .985 fielding percentage led all second basemen in the system with at least 100 total chances. This was his first full season, and he ended up among best in the organization in both hitting and stolen bases. The 20-year-old Venezuelan batted .301 with 20 doubles, 15 homers and 42 thefts in 125 games.

"A lot of people knock him down because of his size, but I think his size is an advantage because it makes some people overlook him," he said. "He's got great hands and a really strong arm. He's always going to be a guy who needs to do more on the field because of his size. He's listed at 5-foot-5, but he looks shorter. But he plays a good game. He can beat you with his defense. He knows how to play the game." "He will always have to prove himself at each level because of his size," Scott admitted, "but he is a tough, confident player who is very determined to prove that he can play at higher levels. We may have been surprised by his overall numbers, which were outstanding, but we are not surprised by his success. He is a very driven player."

Albert Cartwright, who hit .294 and stole 31 bases between the California and Texas leagues, also deserves recognition.

Scott noted that Cartwright has been playing second base only two seasons and "has shown great improvement with his defensive game. [He's] starting to learn the intricacies of playing second base ... footwork around the bag, pivots on double play feeds, positioning, communication, etc."

Third base -- Jhonny Medrano, Greeneville (44 games): Playing his second season in the U.S., Medrano batted .295 and posted a .514 slugging percentage. The 23-year-old Venezuelan had 13 doubles, two triples and seven homers while collecting 24 RBIs over 44 games. Injuries probably slowed his climb through the system, Scott said.

"[Medrano] has had some knee and elbow issues that have been more of a disruption to his playing time," he exaplained. "He does show flashes of some tools. He is a pretty good hitter with some strength to his swing. He has good hands" and can play either corner infield position and is a capable substitute at shortstop.

"He just needs a healthy season so he can begin to put it all together. He should be in Lexington next season and he should be a big part of that team's success."

Shortstop -- Jonathan Merritt, Greeneville (58 games): Merritt signed as a non-drafted free agent out of the University of Alabama-Birmingham and produced at Rookie-level Greeneville.

The Georgia native ranked among the league leaders in triples (tied for second with seven) and walks (fourth, 31). Despite hitting .248, he posted a .367 on-base percentage, stole 12 bases in 17 tries and scored 34 runs in 58 games. Merritt added nine doubles and four homers in the abbreviated campaign.

"He showed us some very steady defensive skills. His strength is definitely his defense," Scott said. "He [also] showed enough athletic ability to lead us to believe he could be a decent offensive player who could be an asset to the Astros organization."

J.D. Martinez, Lexington (88 games), Corpus Christi (50 games): The breakout star of the organization, Martinez won the South Atlantic League batting title with a .363 average and led the circuit with a .598 slugging percentage and .433 OBP. His .341 overall average led the system -- Major Leagues included.

"J.D. is a natural hitter who has shown the ability to hit for a high average and hit with power," said Scott. "He does a great job of using the entire field. He really keeps his hands inside the ball well, which allows him to control the barrel. He has a knack for getting his barrel on the ball, no matter the pitch or the location. He made the successful jump from [Class A to Double-A] and we think he will have a shot at the [Majors] sometime in 2011."

Martinez was another prospect Linares enjoyed working with over the last two seasons.

"He's going to become a decent big league hitter," Linares said. "He's not going to hit for too much power right away, but he might down the road. He's only been in the pros for two years."

Still, the 23-year-old Floridian finished near the top among Astros Minor Leaguers in homers (fourth with 18) and RBIs (third, 89). It was the first full season for Martinez, a 2009 10th-round pick out of Nova Southeastern University.

Barnes' 28 total homers led the entire organization, topping big leaguers Lee and Hunter Pence, and placed him fifth in the Cal League. He hit for the cycle for Lancaster on June 9, then had a two-homer, six-RBI game exactly a month later. During a seven-game stretch from July 31-Aug. 8, he went yard six times and knocked in 10 runs, then registered back-to-back four-RBI games on Aug. 21-22.

Jacob Goebbert, Lexington (135 games): This was Goebbert's first full season in the pros, but he didn't show any signs of wearing down. Over his final 10 games, he hit .400 with 12 RBIs, nine extra-base hits, eight runs scored and four stolen bases in four tries.

Considering his play during the regular season, Goebbert's production as summer waned wasn't shocking. He topped the system with 98 RBIs and led the South Atlantic League with 48 doubles, 59 extra-base hits and 91 runs scored. He also ranked fifth with 231 total bases.

"This season started slow, but it all started to come together for him in early May and he never looked back," Scott said. "Jake has a great feel for the game and a real understanding of what it takes to compete on a daily basis. He has a good plan going into his at-bats and he has a good idea of the strike zone."

The Texas native was selected by the Pirates in the 46th round of the 2005 Draft but chose to play at Angelina Junior College and signed with the Astros as a free agent in 2008.

"Hinze's a guy who's been overlooked for a couple years. He was dealing with some personal issues, some [family-related] stuff, but he's played through that," Linares said. "He works as hard as anybody. He's a very good hitter. Power-wise, he's probably one of the better power hitters in the Minor Leagues. He can hit. Defensively, he's a little limited."

The numbers show this was the strongest of his three pro seasons, and those familiar with Hinze back that up.

"His success was a nice surprise for the organization," Scott said. "We knew he had some ability to hit and hit for power, and it really came together for him this season. More impressive was his ability to drive in runs -- he was one of best clutch hitters on the Lexington team.

"Kody also showed tremendous improvement in his defensive work at first base. His overall game improved as much as anyone in our system."

Right-handed starting pitcher -- Jose Cisnero, Lexington (26 games): Cisnero, a 21-year-old Dominican pitching his first full season, was 8-6 with a 3.65 ERA in 26 starts at Class A.

Over 133 innings, he struck out nearly twice as many batters as he walked (126-65) while holding opponents to a .221 batting average. His strikeout total was third among Astros Minor Leaguers and his ERA was sixth -- third among pitchers who threw at least 100 innings.

"I saw Cisnero a couple of days ago," said Linares, who's coaching in the Dominican Winter League. "I had him this year and last year. He's done a lot of work. He's got a really good fastball. He needs to work on his secondary pitches. He's knows how to pitch.

"He showed a lot of improvement over the last two years. From the beginning of this season to the end, he [developed into] my No. 1 guy."

Left-handed starting pitcher -- Douglas Arguello, Corpus Christi (22 games): Arguello's 2.55 ERA not only was the best in the Texas League by more than 30 points, it placed him third in all of Double-A ball. One Astros prospect, Gulf Coast League righty Jose Perdomo, had a lower mark than Arguello, but the Nicaraguan southpaw made twice as many starts at a more challenging level.

He kept Texas Leaguers to a .254 average, which was fourth in the circuit, and allowed one run on three hits in a nine-inning complete game on May 10. Two starts later, Cisnero gave up just an unearned run on four hits in another complete game. An injury kept Arguello out of the All-Star Game and he was shut down after Aug. 6. Still, he was too effective over 22 starts to be ignored.

Arguello isn't a textbook power pitcher -- his fastball is generally in the upper 80s -- but he showed this season he's crafty enough to win ballgames.

"[He] has a very good two-seam fastball to go along with an above-average changeup," said Scott. "He's a guy who has to command his stuff to be effective. He must be able to hit his spots to succeed."

Clearly, he hit those spots this season.

Relief pitcher -- David Berner, Lancaster (50 games): A 2009 14th-round pick, Berner had enormous success out of the bullpen, despite working in the hitter-friendly Cal League.