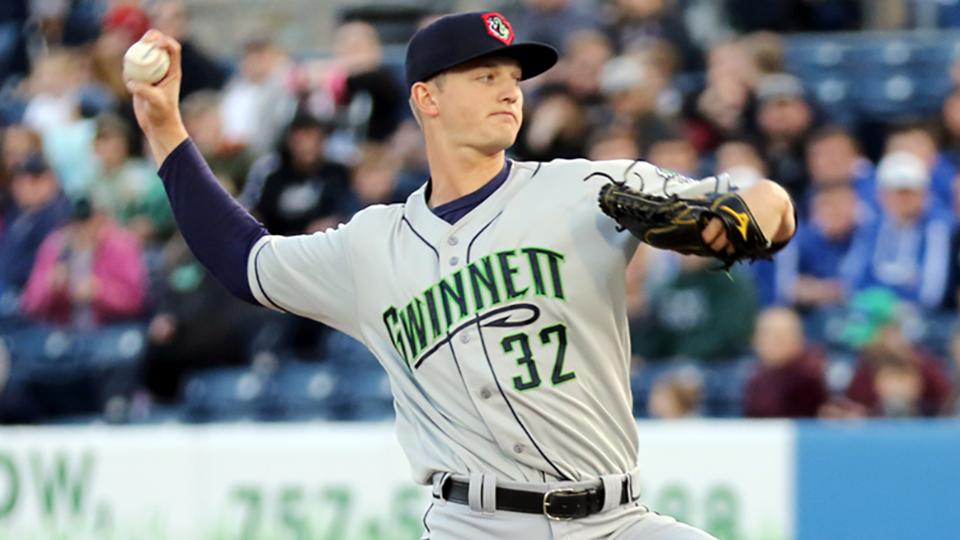 Mike Soroka was the third-youngest player in the International League on Opening Day of the 2018 season. (Steven Goldburg/Norfolk Tides)

The Braves already have one 20-year-old on the Major League roster, and that seems to be going pretty well. On Tuesday, they added another.

No 30 overall prospect Mike Soroka has been promoted from Triple-A Gwinnett and will make his Major League debut Tuesday in New York against the Mets, the Braves announced. Soroka has to be added to the 40-man roster before taking the mound and will take the place of right-hander Chase Whitley, who was optioned to Gwinnett, on the 25-man roster.

Soroka gives the Braves the three youngest players in Major League Baseball this season. Ronald Acuña Jr. (20) took that title away from Ozzie Albies (21) last Wednesday when he made his big league debut, and the outfielder has gone 8-for-19 (.421) with a homer and four doubles in five games since.

Despite his age, Soroka had no issue handling himself in the International League. The right-hander posted a 1.99 ERA and 0.97 WHIP with 24 strikeouts and only five walks in 22 2/3 innings over his four starts with Gwinnett. His most recent outing was his best yet: Soroka scattered three hits and three walks while fanning four over seven scoreless frames last Monday at Rochester. That outing, which came as part of a doubleheader, was the first shutout of his career.

The Braves have been aggressive with Soroka since taking him 28th overall in the 2015 Draft out of Bishop Carroll High School in Calgary. They pushed him and fellow 2015 pick Kolby Allard to Double-A Mississippi as 19-year-olds last season, and Soroka proved up to the challenge. He posted a 2.75 ERA and 1.09 WHIP with 125 strikeouts and 34 walks in 153 2/3 innings in the Southern League, earning mid-season All-Star and Futures Game participant honors along the way.

Soroka's best asset might be his ability to throw all three of his pitches for strikes. He's walked only 5.2 percent of the batters he's faced in his Minor League career, and that control hasn't wavered at the Minors' highest level, where he had a 5.8 percent walk rate in his four Gwinnett starts.

Nor are these just average pitches he's putting in the zone. Soroka's low-90s fastball is considered a plus pitch because of its impressive movement, and his slider and changeup are also considered above-average by MLB.com. Using all three as weapons is a big reason why the 6-foot-5 right-hander has seen his strikeout rate jump from 19.9 percent last season to 27.6 percent in April. The contact IL opponents did make against Soroka was weak as well; 69 percent of the balls put in play against him were on the ground.

As a result of Soroka's promotion, Sean Newcomb's start has been pushed to Wednesday and Julio Teheran moves into the Thursday slot. That gets both pitchers an extra day of rest, with Teheran perhaps needing it most after leaving his last start with tightness in his right trapezius muscle.