No. 11 overall prospect led off for NL at All-Star Futures Game 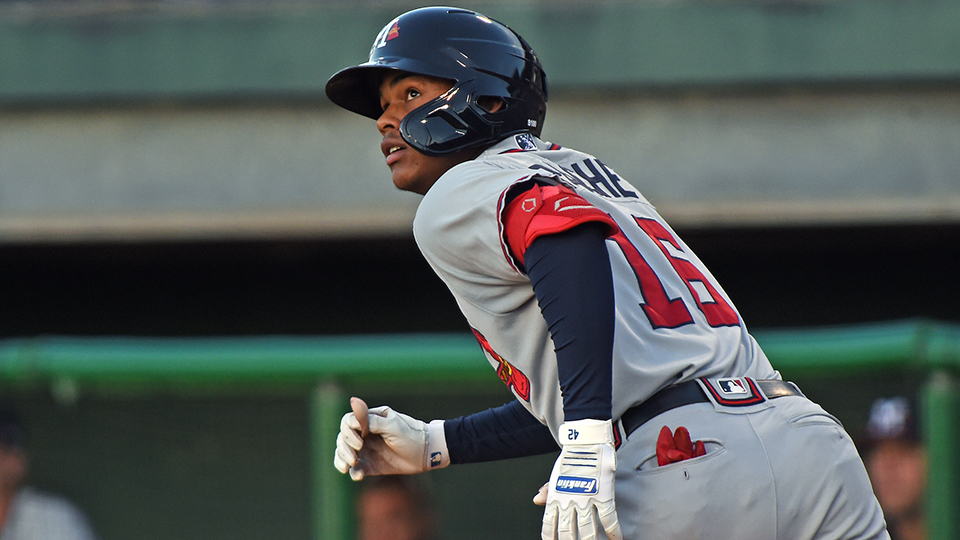 Cristian Pache received 70 grades on the 20-80 scale for his defense, arm and speed from MLB Pipeline. (Brian McLeod/MiLB.com)

Sixteen months after Ronald Acuna Jr. made his highly anticipated Major League debut, another Braves outfielder looks to be one step closer to joining him after Cristian Pache was promoted to Triple-A Gwinnett, Georgia Sports Now reported late Sunday.

Video: Pache blasts off for M-Braves

Signed as an international free agent out of the Dominican Republic in 2015, Pache has rocketed through the Braves system. He began his career the following year and put together a .309/.349/.391 slash line in the Rookie-level Gulf Coast and with Rookie Advanced Danville. MLB.com's No. 11 overall prospect spent all of 2017 with Class A Rome before splitting last season between Class A Advanced Florida and Mississippi.

A three-time midseason All-Star selection who was voted on to the Arizona Fall League All-Prospect team last year, Pache participated in the All-Star Futures Game in July in Cleveland, where he served as the leadoff hitter for the National League. The 20-year-old batted .291/.348/.506 in the first half to earn a spot at the Southern League All-Star Game. Although he stumbled to a .221 average in July, he's notched a pair of multi-hit efforts in his last four games.

"He's just coming along very well," M-Braves manager Chris Maloney told MiLB.com following Pache's four-hit performance on June 20. "He's learning to lay off pitches, he's not really chasing anything anymore. It's just the maturation process coming along real nice. He's just a heck of an athlete, an elite center fielder, and he can just go get em out there. He's got some zip in his bat, but really he's figuring things out as we go here."

Noted for his tremendous defense in center field -- Pache is considered by many to be the Minor Leagues' best defensive outfielder -- the 6-foot-2, 185-pounder is quickly following the path of Acuna and Austin Riley, who made his big league debut on May 15.

"He's hit first or second all year for us and produces a lot of RBIs, he plays plus defense, he's got a heck of an arm -- makes nice throws in big times. He's just a heck of a ballplayer," Maloney said. "You love having a guy like that play for you."

Pache went 1-for-3 with a walk and an RBI on Saturday in what appears to be his final game for the M-Braves.