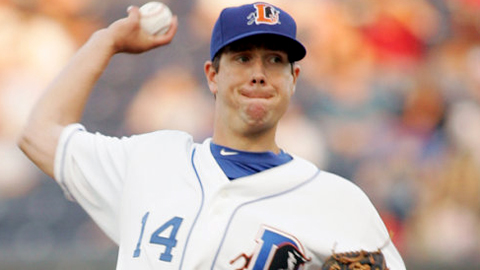 Brian Baker recorded his first win as a starter since June 26. (Durham Bulls)

Less than 24 hours after watching the Bulls clinch their fourth straight International League division title, Brian Baker showed there were no hangovers from the celebration.

Baker allowed one hit and four walks while striking out four over seven innings Saturday as Durham blanked the Norfolk Tides, 1-0.

"We celebrated last night and had a good time," the 27-year-old right-hander said, "but I didn't get too wild because I knew I had to start today and keep it together.

"I didn't know how the guys were going to respond today. We celebrated in the locker room for a very long time, but I just wanted to put up some zeros and, luckily for us, one run was all we needed."

Baker was lights-out to start the game, holding the Tides hitless until Scott Moore singled with two outs in the sixth. Coming off three consecutive losses and one of his worst starts as a pro, he responded by dominating Norfolk while throwing a career-high 103 pitches.

"I felt great out there," he said. "All three of my pitches were working well, I was changing speeds and my changeup felt really good. I was almost just trying to let them get themselves out on a second- or third-pitch ground ball.

"I was getting a lot of swing and misses and I had five whole days off, so my arm felt pretty good."

Baker had surrendered eight hits in two of his previous three starts, including an Aug. 2 outing at Pawtucket in which he was reached for 10 runs -- nine earned -- over three innings. On Saturday, however, the Columbus State product was virtually untouchable.

"The game against Pawtucket was probably as bad as I have been and I couldn't get my secondary pitches over for strikes," he said. "I didn't fall behind much (tonight), but when I did I could use my changeup and slider, my two secondary pitches, to get me back into the at-bat.

"I felt that I could throw inside or outside and really do whatever I wanted. I just tried to get out there and pitch the best I could and keep my team in the game."

Baker got Matt Angle and Robert Andino to ground out to start the sixth. And while he knew he was working on a no-hitter, he said it didn't distract him from the task at hand.

"I don't think it was playing on my mind," he said. "I saw the scoreboard and nobody was talking to me in the dugout, but I knew that we still had the sixth, seventh, eighth and ninth to play, so I wasn't really thinking about it.

"[Moore] took a changeup to straightaway center and it would have been a tough play for anyone in the field to make. I felt it was a decent pitch because I was feeling my change all night long, but he hit it in the right spot."

The Georgia native, converted into a full-time starter at the end of July, said he had no problem exiting after the seventh.

"I was struggling a little bit towards the end and I could feel my arm dropping," he added. "I don't really know if I had a pitch limit, I think it was more about whether I was looking tired out there.

"They wanted me to go six or seven tonight, and even though my heart wanted to go back out there in the eighth, my arm was too tired. This was only my ninth start, so my arm isn't really ready to go much over 100 pitches."

Baker turned the ball over to R.J. Swindle, who pitched a perfect eighth. Winston Abreu worked around a two-out double and struck out the side in the ninth for his 20th save. Michael Aubrey's extra-base hit marked the first time the Tides had a runner in scoring position since the third inning.

"Our bullpen has been great all year long," Baker said. "[Swindle] got his three outs quickly and then Abreu came in and was lights-out, like he always is."

The win was the 80th for the Bulls, who boast the best record at the Triple-A level.

"Hopefully, we can keep this run going and get back to the championship again," Baker said. "We won't take our foot off the pedal and I don't see us letting up at all."

Ashley Marshall is a contributor to MLB.com. This story was not subject to the approval of the National Association of Professional Baseball Leagues or its clubs.