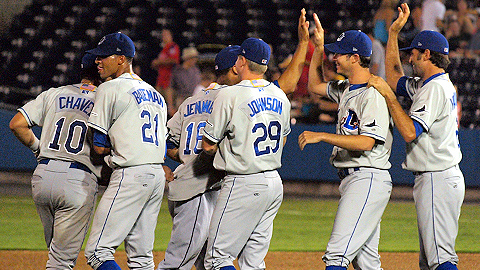 Winning never gets old for Charlie Montoyo, but it does get cold.

"I'm soaked, I'm cold, but I never take this granted, not for a minute," Montoyo said after managing the Durham Bulls to their fourth straight International League South Division title on Friday.

The Bulls enjoyed their annual spirited celebration in the clubhouse following the win.

"I'm lucky to have a great group of professionals who know how to play the game," Montoyo added. "We have a good division, so I don't take that for granted for a minute."

Rocco Baldelli homered and fellow Major League veteran Ramon Ortiz allowed one run over 5 2/3 innings in his Bulls debut as Triple-A Durham sealed another playoff spot with a 3-1 victory over Norfolk.

The Bulls, who own the best record in Triple-A at 79-47, cruised back into the race for the Governors' Cup, thanks to a veteran lineup and an All-Star manager in Montoyo. Durham will face the West Division champions -- likely Columbus or Louisville -- in a best-of-5 series beginning Sept. 8.

"It was almost like wining the championship last season in Scranton," Montoyo said of Friday's postgame celebration. "It was like, here we go again."

Durham, which beat the Scranton/Wilkes-Barre Yankees to win the league crown last September, entered the night with a magic number of two, meaning a win and a loss by second-place Gwinnett produced another locker room party. Gwinnett's Scott Diamond had a no-hitter through five innings, but the bullpen coughed up a run late in a 4-3 loss at Charlotte.

"I've been here all four titles and all are different and special," Montoyo said. "This is awesome."

The Bulls have dominated their division rivals this year, going 30-17. They have an 18-game lead over the G-Braves, the biggest divisional margin since Columbus captured the IL West by 22 games in 1992.

Durham features veteran bats like former big league All-Stars like Baldelli and Dioner Navarro. In fact, Baldelli, Navarro and outfielder Fernando Perez all played in the 2008 World Series with Tampa.

"The beauty is you got guys like Navarro who come here ready to work," Montoyo said. "I'm lucky to have kids like that. They want to get back [to the Majors] and do what they can win."

Ortiz allowed four hits and struck out three without figuring in the decision. The 37-year-old right-hander appeared in eight games with Buffalo before opting out of his contract with the Mets on Aug. 1.

"I've been in the race a long time and a guy like Ortiz, he throws good and looks good, so I get excited for the race," Montoyo said. "He could easily go up and help our club (in Tampa Bay). He pitched great, gave our team a chance."

Jake McGee (1-0) struck out four over 1 2/3 innings for his first Triple-A win before Joe Bateman recorded the final five outs for his third save.

Baldelli singled home Elliot Johnson in the first, but Norfolk tied it in the third. J.J. Furmaniak scored the go-ahead run on a wild pitch in the seventh before Baldelli hit a leadoff homer, his first at Triple-A this year, off Dennis Sarfate in the ninth.

"He's one of my favorite players of all-time," Montoyo said of Baldelli, a talented outfielder who has been hampered by injuries and illness throughout his career. "He's just a professional. He's another guy I'm getting excited about. He's trying to make a comeback and he really looks good at the plate."

Baldelli was playing just his fourth game with Durham.

"I'm excited about him, he can go help our big league club," Montoyo added.

"The beauty of the team is teamwork. It's different guys. Every night, it's a different guy, so that makes this very special."

It's the first time in Durham's Triple-A history that the team has won four consecutive division championships. Montoyo has added another impressive year to his own resume. He also skippered the squad of American League affiliates at the last month's Triple-A All-Star Game.

"I'm just very lucky to have good players, that's all," he said. "I've gone through everything in the Minors, I know how to tough is to win with all the movement, so this is awesome."