No. 28 prospect accomplishes feat in third game with Quakes 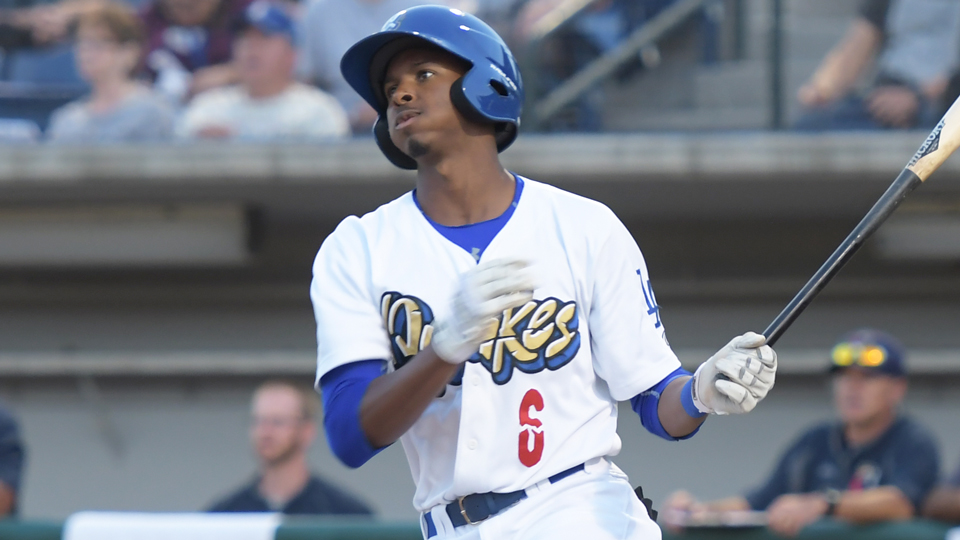 Brendon Davis is happy to be home in Southern California and he's given his new teammates plenty of reasons to be happy he's joined them.

"I played with most of these guys, whether last year or in Spring Training, so I already have good relationships with a lot of them," the Dodgers' No. 28 prospect said. "So I didn't feel like I have to prove anything, but it's been good to make an impression."

In his third California League game, Davis set a career high with five RBIs while going 2-for-5 with a pair of doubles, a walk, a run scored and a head-turning play at third base in Class A Advanced Rancho Cucamonga's 11-4 romp over Lancaster at LoanMart Field.

Quakes manager Drew Saylor likes what he's seen from the teenager, who's played every infield position except first base this year but has been limited to the hot corner with Rancho Cucamonga.

"One thing I noticed even since I saw him in Spring Training, he's watered down a lot of the noise he had in his swing," the skipper said. "It's much calmer, more compact, and he's also recognizing pitches much better. He's showing a lot more control, and that's always a good thing."

The native of the Los Angeles area -- who turns 20 on Friday -- batted .245/.357/.403 with 30 extra-base hits in 86 games with Class A Great Lakes. He's 4-for-10 with three doubles and two walks since debuting in the Cal League on Sunday, and parents Gary and Londa Davis along with other friendly faces were in the stands to see his career-high five RBIs.

"My family's been to all the games in Rancho so far, my family and my friends. It's been a group of them, a lot of people coming out," the 2015 fifth-round pick said. "To be honest, by the end of the game I didn't even [remember] that I had five RBIs. I was just trying to put together good at-bats every time up."

With one out and two runners in scoring position in the third inning, Davis lined a double to left off Jesus Tinoco. Three innings later, he came up with two outs and the bases loaded and cleared them with another double to left off Carlos Polanco.

"It's always easier to hit when guys are on base. That puts more pressure on the pitcher," he said. "When you come up with the bases loaded, all the pressure is on the pitcher. I'm thankful for my teammates for putting me in that position."

The Quakes had a 9-3 lead in the seventh, but the JetHawks threatened to change the tone of the game with back-to-back singles and a walk. With two outs, the speedy Wes Rogers seemed poised to extend the inning with an infield hit. Davis intervened.

"It was beautiful," Saylor said. "It was basically a swinging bunt going into the 5-6 hole, and he charges the ball and grabs it barehanded.

"It just looked very, very easy. It looked routine, but it was anything but -- there was a [darn]-near 80 [grade] runner at first base, and being able to do that and get him out was a tremendous play. We retained the momentum because of it. It shows he brings a lot to the team [on defense, too]."

When Rogers stepped in, Davis remembered him beating out a dribbler an inning earlier.

"I wasn't going to let that happen twice," he said. "I was looking out for my pitcher. That guy could run, and I didn't want a cheap hit to cost my pitcher. I did my best and was able to make the play."

• Get tickets to a Quakes game »