Solondz, Curto, Whetzel all hoping to get permanent callups 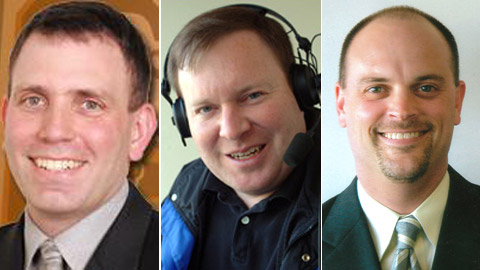 Neil Solondz, Mike Curto and Josh Whetzel all had their moments in the Majors in 2011.

Are you a fan of long bus rides, cramped working conditions, a hyper-competitive professional environment, low pay, little recognition and being away from friends and family for months at a time? If so, Minor League Baseball broadcaster could be the career for you.

Despite such a deeply unappealing job description, dozens (if not hundreds) of aspiring broadcasters will descend upon the Winter Meetings in Dallas next week with the single-minded goal of getting a job in Minor League Baseball. While well aware of the hazards described above, these dulcet-voiced individuals are inspired by job perks that potentially make it all worthwhile: honing their craft within the sport they love, chasing that oft-elusive Major League dream.

Three veteran Minor League broadcasters achieved just this in 2011, however briefly: Neil Solondz (Durham Bulls), Mike Curto (Tacoma Rainiers) and Josh Whetzel (Rochester Red Wings). While nothing is guaranteed, this triumvirate of seasoned professionals has put themselves on the cusp of a life in "The Show."

Getting the call to make the call

If you're going to be broadcasting in the Minor Leagues, then it could be argued that Durham is the best place to do it. The Bulls, one of the most storied franchises in Minor League Baseball, play in a top-notch facility and are owned by a broadcasting company which, naturally, puts an emphasis on delivering a high-quality product. And the Bulls, led by veteran skipper Charlie Montoyo, have enjoyed a consistent run of on-field success as well. Solondz, now entering his ninth season with the club, is thankful for the opportunity.

"This is a great tech-oriented company and a great brand to be involved with," said Solondz, who came to the Bulls after three seasons with the Class A Lakewood BlueClaws. "And I'm very appreciative that they'll never stand in the way of an opportunity."

That opportunity is broadcasting for the parent Tampa Rays, who have had Solondz fill in on their broadcasts in each of the past two seasons. While there, he managed both pre- and postgame duties, as well as getting the chance to do radio play-by-play.

"I try not to turn it into the seventh game of the World Series," said Solondz of broadcasting at the Major League level. "[In the Majors] there may be a more consistent level of play, but it's still baseball. The bases are still 90 feet apart, and the mound is still 60 feet, six inches away."

For Solondz, such a level-headed attitude is crucial.

"If you're worried about this game or that game, that one game that'll make your demo CD stand on its end, then you're trying too hard and you'll change your approach," he said. "I've learned to enjoy the moments as they come. If I love what I do and continue to do it, then hopefully that reward will be there."


In the meantime, Bulls fans will continue to enjoy Solondz's on-air musings. His main influences growing up were Bob Murphy and Gary Cohen of the New York Mets, and he tries to incorporate elements of both -- a laconic story-telling style with clean and descriptive play-by-play.

"I aim to be a comfortable listen, with a dry wit and a good sense of humor," he said. "But at the same time, a respect for players and the game is critically important."

Video: Solondz on the end of a no-hit bid

2011 wasn't the first season that Mike Curto spent time in a Major League broadcast booth, but it was the first time in which, as he notes, "they actually paid me."

Curto's Major League debut certainly came under anomalous circumstances. In 2003, the Montreal Expos were a lame-duck franchise, and the team cut expenses by sending only one English-language broadcaster on the road (the majority of the team's audience was French-speaking). To make up for this deficiency, local broadcasters were recruited at each stop to provide color commentary. Curto, who has been with Tacoma since 1999, was happy to step in when the Expos visited nearby Seattle.

2011 was a totally different situation, although also under anomalous circumstances. Legendary broadcaster Dave Niehaus passed away following the 2010 campaign, so the Mariners spent 2011 with long-time play-by-play man Rick Rizzs and an extensive rotating crew of guest color men. It was in this context that Curto got the call.

"The first game I did was on June 30, a mid-week day game against the Atlanta Braves," recalled Curto. "[The Rainiers] were in Las Vegas at the time, so I had to change my flight to 6 a.m. in order to get there in time for the game."

Accompanying Curto on the flight were Rainiers catchers Josh Bard and Jose Yepez, both of whom had been called up after injuries to the regular Seattle backstops. Fortunately, these early morning travelers made it to Safeco Field in time for the ballgame.

"When I got there I was nervous -- 'This is my first day in the bigs, for real,'" said Curto, whose broadcasting career began in 1994 with an independent team in Lafayette, Ind. "But once the game started, I was alright. I was just doing what I do every day."

Curto received positive feedback about his three Major League stints, and a Facebook page even materialized lobbying for his full-time hiring in 2012. (When asked about the page, Curto laughed and then offered a terse "I am aware that it exists.") When and to what extent he returns to Seattle is of undetermined, but regardless his time there was a fulfillment of a life-long dream.

"I think like a lot of broadcasters in my position, this was something that I had wanted to do since I was a kid," he said. "I grew up listening to Hank Greenwald do [San Francisco] Giants games, so I'm sure I patterned myself after him. I try to be informative, and to give plenty of background on the players. ... I also try not to be too much of a homer, but that's who pays me so you might see a little bit of homerism in there."

A brush with history

One of the most historically significant ballgames of the 2011 season occurred on Sept. 19, when Mariano Rivera set the all-time saves record after pitching the ninth inning of a 6-4 Yankees win against the visiting Minnesota Twins.

And there in the Twins broadcast booth was Josh Whetzel, making his Major League debut during his 17th season as a professional broadcaster. The ballgame was a makeup contest within the midst of what was otherwise a Twins homestand, and Whetzel was given the opportunity to join the broadcast team.

"About a week ahead of time, I started looking at the schedule. Rivera hadn't locked down the save yet, and I thought to myself that it would really be something else if he got the [record-breaking] save that day," said Whetzel, who has spent the past nine seasons with the Red Wings. "That's exactly what wound up happening."

Having such an experience on the professional resume can only be looked at as a good thing, as broadcasters need to do all they can to stand out within such a crowded field.

Whetzel grew up in Kansas, but could also pick up the Texas Rangers flagship station on his AM dial. While he was influenced by broadcasters with both teams, he cites the legendary Vin Scully as his ultimate influence. And not surprisingly, Whetzel aspires to excel in similar ways.

"I'd like to think that I'm well-prepared, conversational and descriptive," he said.

Solondz, Curto and Whetzel are all veteran broadcasters with Major League experience, but they remember well when they were in the position of hustling for that first broadcasting job.

"Things are different now, in that when I was starting out, you couldn't look for jobs on the internet," said Curto. "But the Winter Meetings are still crucial, because that's when you can meet a lot of people and really start to network. That aspect of it is still so important."

Solondz concurs, and stresses that broadcasters must do everything they can to stand out within an extraordinarily crowded field.

"You need to have a plan and stick with it. Each year [at the Winter Meetings,] I would have a list of people I was hoping I would run into, and I had to find a way to make that happen," he said. "And everyone I touched base with, I would follow up with a personal hand-written thank-you note. In this day and age everyone is focused on Facebook, Twitter and email, but I still think this is a good idea."

What it all comes down to this: Persistence is key.

"You just have to keep plowing away the best you know how, and hope somebody on the other end has it resonate with them," Whetzel said.