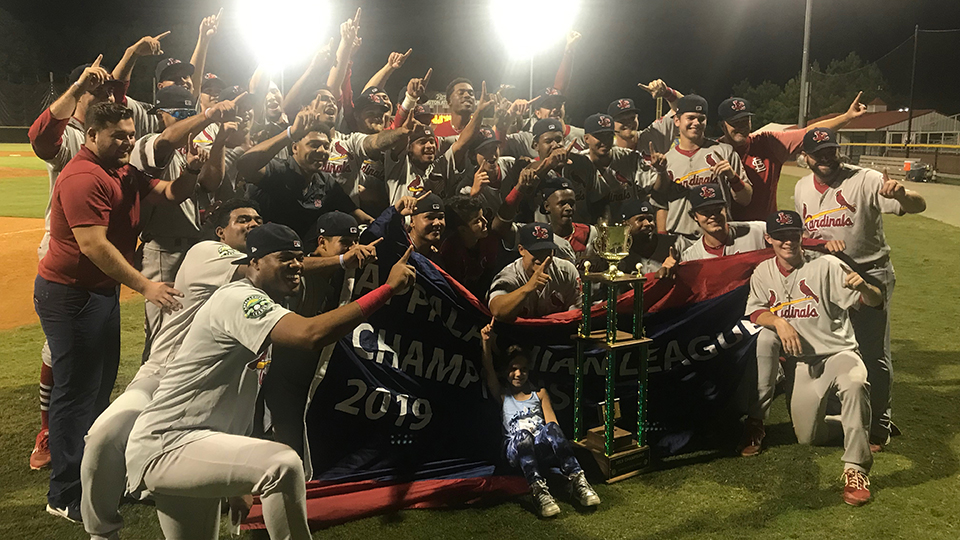 The result is another Appalachian League championship.

"We know how to play good baseball when it comes down to elimination games," first baseman Todd Lott said. "We try to stay calm. We play nonchalant and don't let anything get to you."

Facing elimination for the sixth time in a nine-day span, the Cardinals rallied to beat Burlington, 8-6, in Wednesday night's winner-take-all Game 3 of the Appy League Finals at Burlington Athletic Stadium.

Johnson City won the 12th championship in team history and its fifth in a decade.

The almost nightly drama became part of the routine for the Cardinals, culminating with the final game.

The Cardinals had to win their final two regular-season games to qualify for the playoffs. They won twice on the weekend after dropping the opener of their best-of-3 semifinal series against Bristol. Johnson City lost Game 1 at home against Burlington before logging back-to-back road victories.

William Jimenez delivered the key blow Wednesday, lacing a tiebreaking, two-run double down the right field line with one out in the seventh inning.

"That's what we're teaching -- never give up," said Espinoza, a third-year manager who won his first title. "You flip the page. That's part of it. You're in the [must-win] situation so often, now we're performing."

By the time crucial parts of the game arrived, the Cardinals knew how to respond.

"The way these guys were locked in and never take their head down, these guys deserved to play the last game of the season," said Espinoza, who was a hitting coach in 2016 when the Cardinals also beat Burlington in the Championship Series.

Redmond said the Cardinals realized a few weeks ago that they'd have to battle through a slump to make something good out of the season. Even after losing the first game of the Finals and heading out on the road, there was a sense that the team might be destined for something rewarding.

"There might be," he said. "We knew we had to play well and make it worth the trip."

Johnson City was charged with four errors through three innings before the Royals got their first hit. Burlington stormed ahead with a four-run third and held the lead until the seventh.

Those situations didn't deter the Cardinals, who totaled five errors.

"We weren't getting down on each other," Redmond said of the team's season-long approach.

It was 8-5 before Burlington's Jack Gethings slugged his first career home run in the bottom of the seventh.

Four pitchers limited the Royals to six hits, with Dylan Pearce striking out three over two hitless innings for the save.

"Kudos to the coaching staff and to the Cardinals organization for the way they teach us to keep fighting," Lott said. "It is something we're all excited about."

"We got down early and didn't give up and kept fighting," Burlington manager Chris Widger said. "They just got more big hits than we did. … It [stinks] to lose every time, especially like that."

The Royals' championship drought is the longest for any Appalachian League city. Every current team has at least one championship since the Burlington Indians captured the 1993 title.