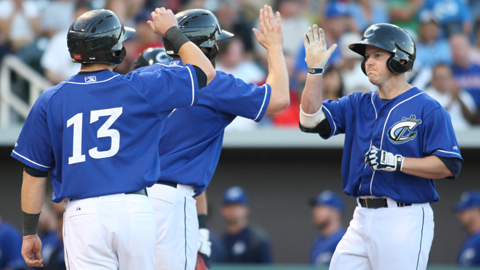 Martinez followed a shaky first inning with six scoreless frames Tuesday as Columbus cruised to an 8-3 victory over the Omaha Storm Chasers in the Triple-A National Championship Game at Isotopes Park.

The Clippers won behind Martinez, a Major League veteran who allowed three runs on six hits over seven innings and was named MVP.

"It's obviously an honor," he said. "But at the same time, it could have been one of a bunch of guys. I think I just figured in the right way, which I'm happy with. I think everyone deserves a lot of credit."

Martinez (1-0) gave up all of those runs and half of the hits in the first inning. He ended up walking three and striking out three.

"After the first inning, we knew we had some adjustments to make," Columbus catcher Luke Carlin said. "Obviously, the dryness here, he wasn't able to get a feel for his curveball right away or his changeup. His fastball was kind of running instead of sinking. He had to make some adjustments, and he did. He did a great job. He was able to make pitches when he needed to. He's definitely the MVP tonight."

"Luke kind of talked to me in the dugout," he said. "He told me to stay back a little bit, I was leaking. I was leaving the ball up. It's tough to pitch here, not just because the ball carries. Coming from the hot, humid weather on the East Coast to very dry [air], it's a little bit harder, the ball moves differently. It just took a while to get my feet wet and get adjusted."

The 28-year-old right-hander won all three of his postseason starts, allowing six runs over 22 innings for a 2.45 ERA.

"The whole team picked me up, defensively and offensively," Martinez said. "There were a lot of balls put in play, I didn't punch out 13 again. It's nice pitching with a lead, I can be a lot more aggressive. With guys on base, it's not as big of a deal."

Omaha put two on with one out in the ninth, but Chen Lee got David Lough to fly out to center field and Lorenzo Cain to ground out to shortstop to end the game.

"Whenever you go into a championship game, you want to win," Columbus manager Mike Sarbaugh said. "I think that's why we play the game. But in this type of game, it's different, it's one game and that's it. If you get timely hitting like we did tonight and good starting pitching, which we got, you win."

The Clippers snapped a 3-3 tie in the third as Tim Fedroff and Travis Buck started the inning with back-to-back singles to put runners at the corners. Jared Goedert roped an RBI double to left field and Beau Mills followed with a run-scoring single through the left side.

Sean O'Sullivan got Chad Huffman to ground into a double play, but Buck scored to make it 6-3.

Columbus tacked on an insurance run in the fourth as Juan Diaz singled, took second on a wild pitch, advanced to third on a fly ball to left and scored on Fedroff's bloop single.

Beau Mills' leadoff homer in the eighth capped the scoring.

"That's one thing about our team is that we never really push the panic button offensively," Carlin said.

The Storm Chasers jumped ahead in the first as Irving Falu walked and Lough singled through the right side with one out. Cain followed with a two-run triple to right-center and scored two batters later on John Whittleman's single to right.

The 3-0 lead was short-lived, however, as Huffman singled and Jerad Head walked with one out in the second. After Diaz flied out, Carlin crushed a three-run homer onto the berm beyond the right-field fence.

"I thought that was the key moment of the game, to be honest with you," Sarbaugh said. "Getting down, 3-0, early, for [Carlin] to come out and hit that and tie it up with one swing, that gave us some momentum."

Chris Jackson is a contributor to MLB.com. This story was not subject to the approval of the National Association of Professional Baseball Leagues or its clubs.