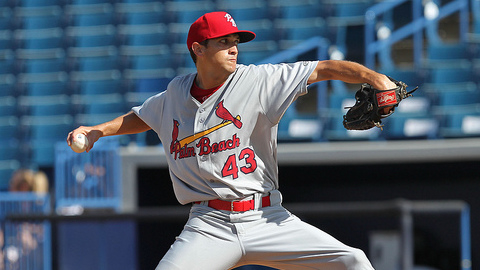 Once he got past the sixth inning, Chris Corrigan was in uncharted territory. He ended up in the Florida State League record book.

It was the ninth perfect game in the league's 93-year history and the first since Charlotte's Nick Regilio beat Jupiter, 3-0, on June 9, 2001.

"It feels great to finally go out there and throw a big game like that," Corrigan said. "And for it to be a perfect game makes it even better."

In his first season as a full-time starter, Corrigan (4-8) had never before been called upon to go the distance. In fact, he'd never pitched past the sixth inning in his professional career. But he said he experienced no fatigue as the game progressed.

"My arm felt great," the 24-year-old right-hander said. "I was feeling fine, just wanted to go out there and keep throwing. I had my defense behind me. I know my guys will make the plays, all I had to do was throw strikes."

Asked what pitches were working for him in the best performance of his career, Corrigan's answer was simple: Everything.

Corrigan, the Cardinals' 30th-round pick in the 2009 Draft, racked up a career-high nine strikeouts and did not issue a walk for only the second time in 16 starts this season (the other was a 2 1/3-inning stint on Aug. 16).

Making his 20th appearance for Palm Beach, the Houston native lowered his ERA to 4.02. He went 0-1 with a 7.36 ERA in four games out of the bullpen for Double-A Springfield, then struggled upon his return to the FSL, going 1-7 in his first 10 starts back. Corrigan's rebounded in his last two outings, yielding one run on six hits over five innings a week ago before making history on Wednesday.

"The first couple of outings are just about going out there and trying to see how long you can go, how your arm feels, how your body feels the next day," Corrigan explained. "As the season goes on, you want to progress and go deeper into games, and tonight I was able to go the full nine innings."

The no-hitter was the second in Palm Beach history. Tyler Lyons pitched the first, a seven-inning gem against Fort Myers on Aug. 8, 2011.

In support of Corrigan, third baseman Alan Ahmady drove in four runs and fell a triple shy of the cycle. Shortstop Ronny Gil doubled and collected three RBIs for the Cardinals.

Zack Cox is a contributor to MLB.com. This story was not subject to the approval of the National Association of Professional Baseball Leagues or its clubs.