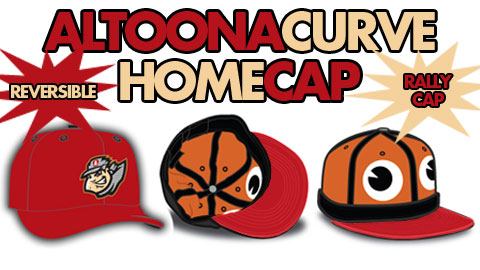 CURVE, Pa. - In late November, the Altoona Curve began an off-season of logo and uniform changes with the unveiling of new designs and on-field team apparel. However, the franchise purposely left the final piece of the uniform puzzle a mystery. During the team's annual media day on Tuesday, the Curve finally took the wraps off their new home caps which feature a fishy twist - a rally cap lining depicting the team's rally mascot, Al Tuna.

After former Curve first baseman Matt Hague helped the team display their new home, road, and batting practice jerseys and road, alternate, and batting practice caps in November, fans wondered when the home caps would be revealed and what they would look like. To loosely paraphrase the lyrical wizard, Bob Dylan: "The answer my friends was throwin' in the fin"...or something like that.

Yes, the Altoona Curve's new home cap is believed to be the first in Minor League Baseball to feature a specially-designed, rally cap lining. When the Railroad Red cap with the new Engineer head logo is turned inside out, a bright orange lining with large black eyes is displayed to simulate the look of popular Curve rally mascot, Al Tuna. The team has been issued the caps and fans can start putting their hooks into them starting today.

"These rally caps capture what the Minor League experience is all about for fans - and that's having fun," said Curve General Manager Rob Egan. "Like much of our fan base, the Plan B branding team we worked with on the new logos really enjoyed Al Tuna during their visit to the ballpark last summer. They suggested the possibility of a home cap with an Al Tuna rally cap lining and we were hooked. The hats took a little longer to produce because of their unique design, but we couldn't be happier with the result and we think our fans will like what they see."

The Curve displayed a sample of the cap at Tuesday's press conference and have the new lids available for sale at The Stockyard, the team's merchandise store at Blair County Ballpark. The hats will also be available online at www.altoonacurve.com on Tuesday afternoon. This will give fans a chance to reel in one of the most unique hats in sports in time for the 2011 home opener.

"I can't wait to see our fans enjoying their new home caps and taking part in baseball's rally cap tradition in a way no other fans ever have," said Egan. "To have our rally mascot depicted in a rally cap is as good a fit as Al Tuna cheering on Altoona."