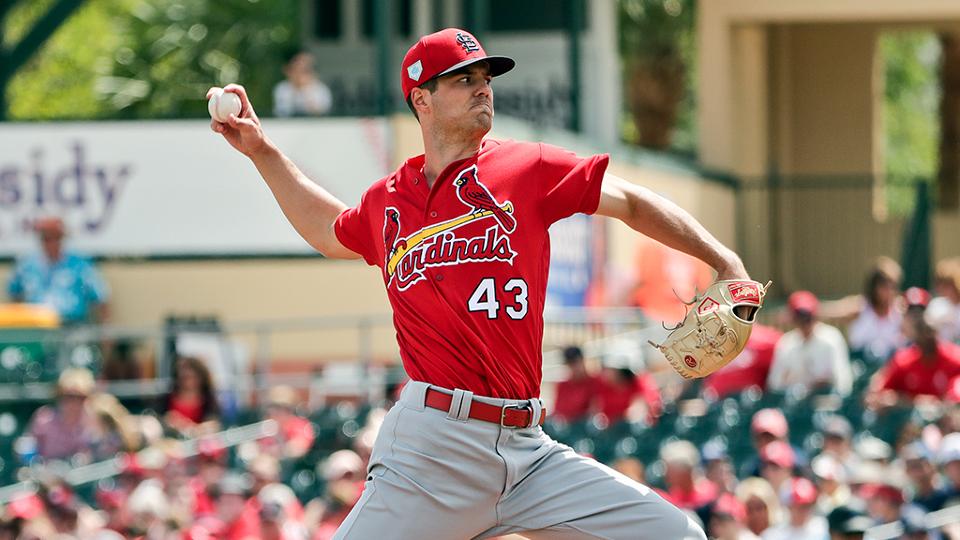 Strikeouts have never been a big part of Dakota Hudson's success, but that wasn't the case Monday against Philadelphia.

St. Louis' fourth-ranked prospect whiffed eight Phillies over five scoreless innings in the Cardinals' 4-1 victory at Roger Dean Chevrolet Stadium in Jupiter, Florida. Hudson allowed four hits and walked one, lowering his spring ERA to 1.72 and strengthening his case for a spot in the St. Louis rotation.

Hudson's eight strikeouts matched the second-highest total of his career -- he fanned nine over eight scoreless innings against Colorado Springs on May 26, 2018. He had previously never struck out more than four batters in any outing of five frames or fewer since he was selected in the first round of the 2016 First-Year Player Draft.

The only trouble spot for Hudson came in the third inning when Phil Gosselin and Cesar Hernandez ripped back-to-back singles with one out before an error by third baseman Yairo Munoz allowed Odubel Herrera to reach, loading the bases. After a mound visit, Hudson rebounded by striking out Aaron Altherr and Nick Williams swinging.

In other spring action:

No. 25 overall prospect Carter Kieboom went 2-for-4 for Washington. Nationals No. 24 prospect Tres Barrera slapped an RBI single and came around to score in his only at-bat. Barrera also threw out Mets No. 16 prospect Will Toffey at second to end the game. Nationals No. 19 prospect Tanner Rainey entered in the eighth with the bases loaded and nobody out, but he worked around an error and a walk with three strikeouts. Top Mets prospect Pete Alonso pinch-hit for Robinson Cano and beat out an infield single. Reliever Kyle Dowdy (No. 26) spun three three-hit frames with two free passes and two strikeouts. Box score

Tampa Bay prospects Brandon Lowe (No. 9) and Garrett Whitley (No. 28) delivered RBI doubles in the loss in Port Charlotte. Pittsburgh No. 18 prospect Pablo Reyes got the start at shortstop and went 1-for-4 with an RBI and a stolen base. Box score

Austin Dean went 3-for-4 with an RBI and a stolen base in Miami's win in West Palm Beach. Dean, the Marlins' No. 27 prospect, highlighted his day with an RBI single to center that fell in front of top Nationals prospect Victor Robles in the fifth. Dean, a 25-year-old left fielder, is batting .364 (12-for-33) with seven RBIs and three steals in Spring Training. Robles, batting .333, started in center and was hitless in two at-bats. Box score

Baltimore's No. 2 prospect, Ryan Mountcastle, went 1-for-5 with an RBI, a run scored and a walk. Drew Jackson (No. 25) walked and scored twice. Box score

San Diego's No. 11 prospect Josh Naylor slugged a solo shot to right-center off Indians righty Trevor Bauer in the second. He also walked and stole second base in the eighth. Fourth-ranked Luis Urias singled in the first and scored on a double by Franmil Reyes. Box score

San Francisco's No. 30 prospect Travis Bergen kept his Cactus League ERA at 0.00 with 1 2/3 scoreless frames out of the bullpen. The left-hander allowed one hit and one walk with four punchouts. Tyler Beede started for the Giants and surrendered two earned runs on four hits, including a two-run homer by Yonder Alonso. The No. 24 prospect struck out three and issued one walk. Abiatal Avelino (No. 17) singled and stole a base in his lone plate appearance. For the White Sox, 30th-ranked Ryan Burr recorded all three outs via strikeout, but not before he was taggged for two earned runs on four hits. Box score

Atlanta's No. 7 prospect Bryse Wilson is vying for a spot in the big league rotation, but his case took a slight hit against New York. The right-hander allowed three earned runs on five hits, including a home run to Luke Voit, over four innings. He walked one and struck out four, including whiffs of Aaron Judge and Giancarlo Stanton in the first. Box score