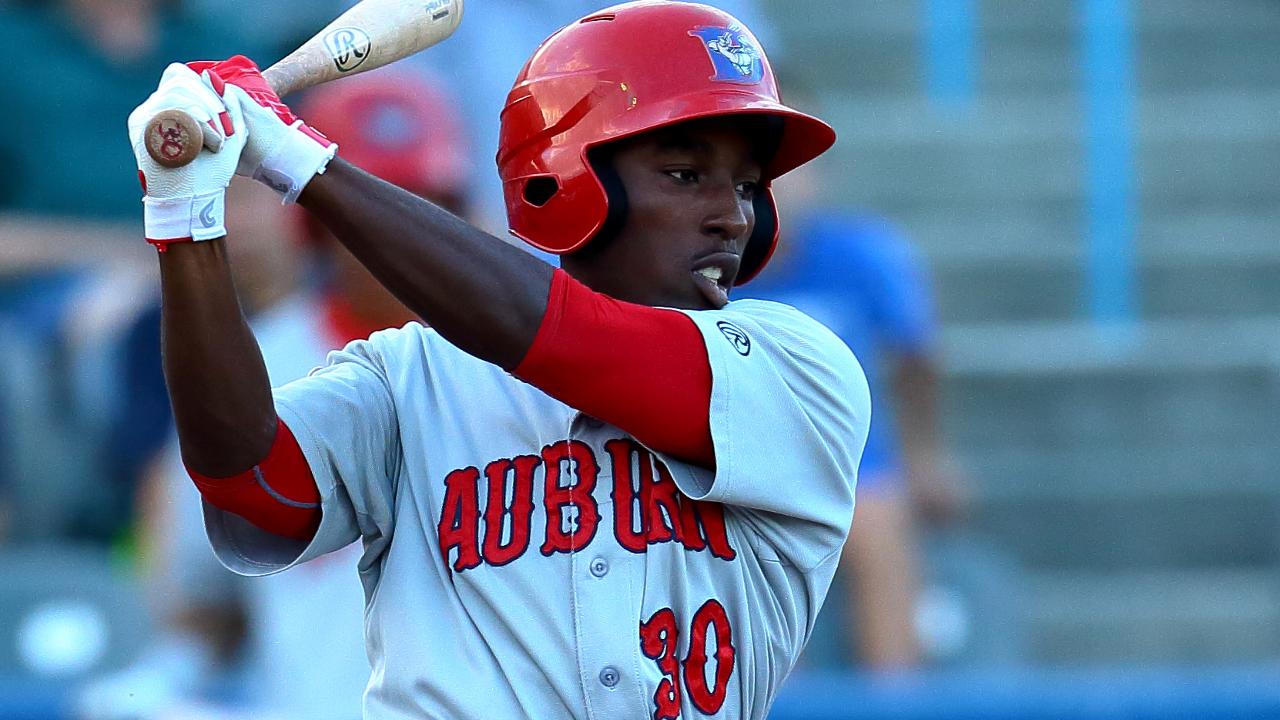 Daniel Johnson sports a 1.111 OPS through his first 11 games at Class A. (Sandy Tambone/MiLB.com)

Daniel Johnson didn't hit his first homer until his second to last at-bat in 2016. But 11 games into this season, Washington's No. 29 prospect leads the South Atlantic League with five long balls.

"I'm seeing the ball really well to start this season and I've been able to get some good swings on it. I hit a few home runs in college, so it's something I've always known I can do," Johnson said.

Johnson grounded into a 4-6-3 double play in his first at-bat, then followed with a two-run homer to center field in the third inning, breaking a tie with Hickory's Ti'Quan Forbes atop the South Atlantic League leaderboard.

"[Lucas Humpal] had two strikes on me. I was just focused on seeing the ball up and not fishing at any low pitches," Johnson added. "I just didn't want to strike out. He put a fastball up over the plate and I got a good piece of it."

In the sixth, Johnson battled for a six-pitch walk and followed that up with a single to right in the seventh.

"I've been working on staying disciplined. This season, I'm working on hitting my pitch and not going after the pitcher's pitches. Instead of just trying to focus on making contact, I'm more interested in making good contact and hitting line drives this season," he added.

Johnson added to his RBI total in the eighth with another kock to right. After spending the first eight games of the season batting ninth, the New Mexico State University product moved up to the two-hole for Sunday's game.

"I really don't think too much about where I'm at in the lineup," Johnson explained. "I usually hit in the leadoff spot, but I've also hit in the ninth spot, so it doesn't really matter to me. I keep the same approach and take each situation as it comes no matter where I'm hitting."

The matchup between Delmarva and Hagerstown pitted two of Class A's hottest hitters, Johnson and Shorebirds right fielder Jake Ring, against one another.

Ring went 4-for-4 with two doubles, a triple and four RBIs. Over his past three games, the University of Missouri product is batting .769 (10-for-13) with a pair of four-hit contests. He leads the South Atlantic League in doubles (seven) and extra-base hits (11).

"I kind of struggled in the beginning of the year and it was kind of hard not to beat myself up mentally," Ring said. "But I got rolling and made the adjustments. My swing is better than it's ever been right now. Obviously, it's a long season and we've got a lot of games, so I'm trying not to get too high or too low. I'm going to continue to beat myself up with positivity."

"When everybody hits, it keeps me motivated and relaxed in the box," Johnson said. "It's nice to be able to keep the line moving and put up some big numbers."