German, RailRiders get even in IL Finals

No. 21 Yankees prospect allows just one hit over seven frames 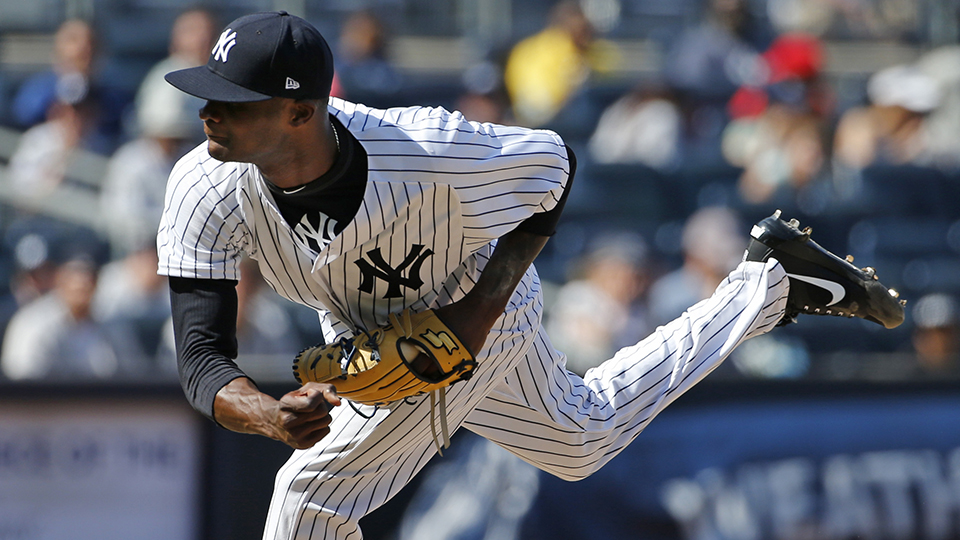 Domingo German sported a 2.83 ERA with 81 strikeouts in 14 regular-season appearances with the RailRiders. (Kathy Willens/AP)

DURHAM, North Carolina -- The Triple-A Bulls have had three opportunities to figure out RailRiders righty Domingo German, and they still haven't solved him.

The Yankees No. 21 prospect stuck with what works -- and it did once again -- as he limited Durham to one hit over seven innings in Scranton/Wilkes-Barre's 4-0 victory Wednesday night at Durham Bulls Athletic Park.

"I know Durham is a great hitting team," German said through an interpreter. "It doesn't faze me because I can be just as good as their hitters."

The right-hander issued three walks and struck out eight as the RailRiders evened the best-of-5 Governors' Cup Finals at one game apiece. Since Aug. 10, German has made three starts against Durham, the International League's third-highest scoring team during the regular season, and did not allow a run in 20 total innings with 25 strikeouts over that span.

Scranton/Wilkes-Barre manager Al Pedrique said staying positive with his hurler proved to be the best approach and that the 25-year-old thrives in the face of a challenge.

"You find a way to motivate him," the skipper said of German, who was staked to a 1-0 lead before he even took the mound on Garrett Cooper's run-scoring infield single in the first inning.

The Dominican Republic native faced his only real threat after issuing consecutive walks to Daniel Robertson and No. 10 Rays prospect Justin Williams with one out in the fifth. German got Justin O'Conner to bounce into a double play, beginning a streak of seven consecutive batters retired to complete his outing.

"He was lights-out," RailRiders catcher Kyle Higashioka said. "He was throwing everything for strikes. With his stuff, if he makes the pitch he needs to make, he's usually not going to get beat."

Jake Bauers, the fifth-ranked Rays prospect, got the only hit off German -- a double to left to start the second. He added another double in the ninth against closer Nick Rumbelow.

German made his big league debut with the Yankees this year, logging five relief appearances before being sent back to Triple-A in mid-July. In 14 regular-season appearances with Scranton/Wilkes-Barre, he amassed a 7-2 record with a 2.83 ERA and 81 strikeouts over 76 1/3 innings while holding opposing batters to a .210 average.

Scranton/Wilkes-Barre made it 2-0 when Donovan Solano's two-out single skipped off Adames' glove and into center field in the seventh. Cooper doubled off the left-center field wall and scored on Higashioka's infield hit in the eighth and sixth-ranked Yankees prospect Miguel Andujar provided a ninth-inning run with a single to left.

Cooper, who joined the Yankees organization in a July trade that sent left-hander Tyler Wade to the Brewers, was sent to the RailRiders on a rehab assignment after sustaining a hamstring injury on Aug. 17, less than two weeks after his Majors debut.

"Getting pitches to hit and if you don't try to do too much, you'll get yours," the 26-year-old said. "The second half [of the season] has definitely been something I hadn't experienced ... but it gives me an opportunity to get everything going and hopefully get back up to New York."

The third game of the Governers' Cup Finals is scheduled for Thursday night at 6:35 p.m. ET as the series shifts to PNC Field in Scranton/Wilkes-Barre.