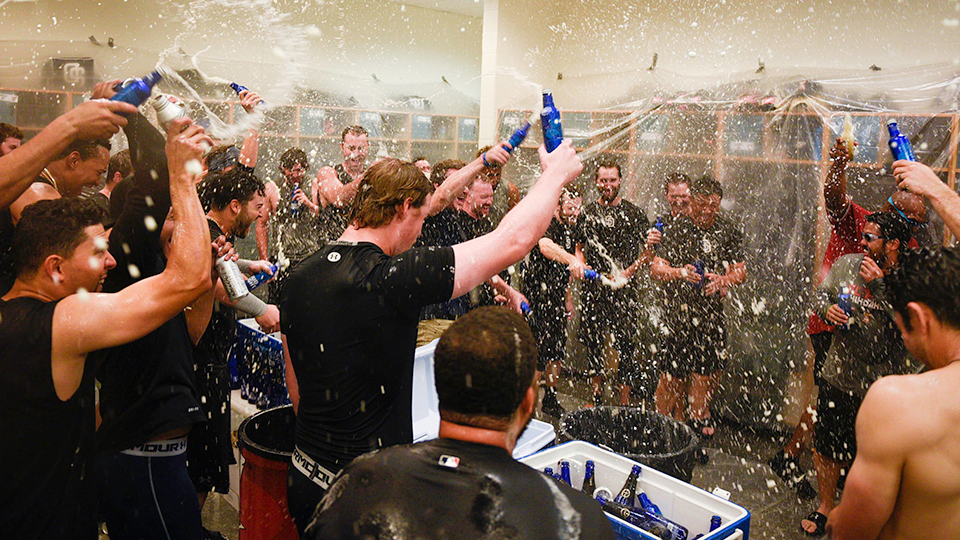 The El Paso Chihuahuas are the only Pacific Coast League team to make the playoffs in 2016 and 2017. (Kaylee Creevan/Sacramento River Cats)

Once again, the Pacific Coast League's Pacific Southern Division has gone to the dogs.

The Triple-A El Paso Chihuahuas (73-68) clinched their third straight title with a 7-3 win over the River Cats at Sacramento's Raley Field on Sunday, the penultimate day of the PCL season.

Video: Renfroe gets the Chihuahuas started

"It's a little different than last year's group," said El Paso manager Rod Barajas, who led the team to the PCL crown in 2016. "Last year we had [players like Hunter Renfroe and Austin Hedges and Manuel Margot], guys we were grooming to take over in the big leagues. This group is more veterans, guys who have been around, bounced around in different organizations. The [guys like Nick Buss, Rafael Ortega] ... we initially didn't think we were going to have a role for stepping up and having great seasons for us."

The Chihuahuas, who are the first Triple-A affiliate of the Padres to win three consecutive division titles since the 1975-1977 Hawaii Islanders, have been an offensive juggernaut this year, swatting 177 home runs -- second most on the circuit.

"Without a doubt, if you look at the pitching numbers, they're not very good. But the last two weeks, the pitching has been huge for us. We've pitched very well. That's the way the team was last year too," Barajas said. "Offensively, we did a lot of damage the whole season, but when it came to the playoffs and getting into the playoffs, the pitching stepped up. On offense, we have guys that can do a lot of different things -- speed, power, guys who can play defense. When you've got the combination of guys with all those skills sets -- [guys like Franchy Cordero, Chase d'Arnaud, Travis Jankowski] -- that really increases your chance of winning ballgames."

"He's been awesome. It's been a tough season for him. He didn't even make the team out of Spring Training. We had an opening for him for a week or 10 days, and then we didn't have a spot, so he went back to [extended spring camp]," Barajas said. "In that situation, all you can do is take advantage of the opportunities you get, and when he did, he hit. He put the ball in play. This guy is going to go up there and give you a great at-bat. He's the poster child of taking advantage of an opportunity when it's in front of you."

• Get tickets to a Chihuahuas playoff game »

The Chihuahuas have also gotten a boost from Renfroe. The 2016 PCL MVP returned to El Paso on Aug. 21 and has since gone 27-for-54 (.500) with 18 RBIs over 16 games. He slugged a grand slam in the first inning of the clincher, his fourth long ball and 11th extra-base hit with El Paso.

With Sunday's win, the JetHawks (78-61) sealed up both the first- and second-half titles in the Cal League South. No. 8 Rockies prospect Garrett Hampson was 2-for-4 with a homer and two RBIs. Ty Culbreth (7-1) earned the victory after allowing three runs on seven hits and three walks while fanning five over six innings. Box score

The Indians (39-37) tied the game in the ninth with a two-out RBI double from Melvin Novoa, then walked off with the North Division title courtesy of a single by Austin O'Banion an inning later. No. 26 Rangers prospect Miguel Aparicio scored the winning run and ended up 3-for-5. Sixth-rounder Noah Bremer (1-0) picked up the win with two hitless innings, striking out the side in order in the 10th. Box score