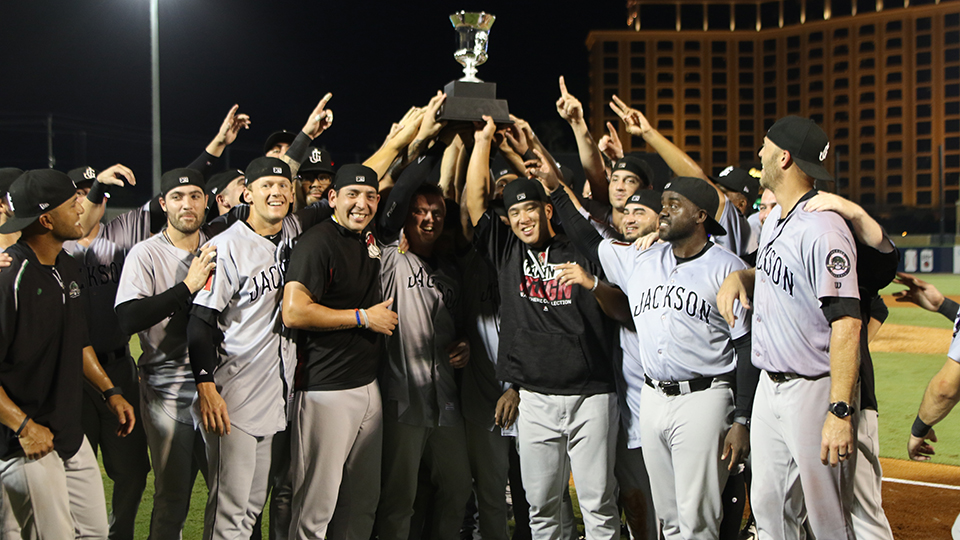 It's going to be a pleasant drive back to Tuscon, Arizona, for Shelley Duncan.

The Jackson manager pushed all the right buttons Saturday as the Generals beat Biloxi, 3-2, to win the Southern League championship. The D-backs affiliate took the best-of-5 Finals, 3-1.

The most consequential decision Duncan made all season came with two outs and two men on in the ninth when he tapped  Evan Marzilli to pinch-hit for shortstop Galli Cribbs. The call, Duncan said, was made primarily because while Cribbs struggles to hit the changeup -- Shuckers reliever Nate Griep's out pitch -- Marzilli excels in timing it up.

Duncan couldn't have scripted it any beter.

Griep threw the 27-year-old a first-pitch changeup and Marzilli yanked a double down the first base line to plate Marty Herum with the go-ahead run.

Jackson was on the board before the first out of the game was recorded. After Ben DeLuzio led off the first with a single, Kevin Medrano cracked a two-run homer that hit the top of the right field wall and bounced over for a 2-0 lead against Biloxi starter and Brewers No. 13 prospect Trey Supak.

"That's about as good a start as you can ask for," Duncan said. "You talk about setting the tone. Kevin's come up big all year for us."

D-backs No. 14 prospect Emilio Vargas, who won California League MVP honors for his solid campaign with Class A Advanced Visalia before his promotion to Jackson on Aug. 1, struck out eight and allowed one run on four hits over five innings. It was one outing removed from his worst start as a General -- he surrendered six runs on six hits, including three homers, over 3 1/3 innings in the semifinals against Montgomery.

"Tonight was the most impressed I've been with him since he got here," Duncan said. "For him to bounce back like that, it was really impressive."

Troy Stokes Jr. tagged Vargas for a solo shot in the fourth to get the Shuckers on the board. The Brewers' 15th-ranked prospect singled to left with out in the sixth and 19th-ranked Trent Grisham followed suit. Top Milwaukee prospect Keston Hiura tied the game at 2-2 with a knock up the middle, and the game stayed that way until Marzilli's clutch hit in the ninth.

"We started trading zeros. The momentum from Kevin's home run went away," Duncan said. "They started putting together some really tough at-bats. That's a really good ballclub they have over there."

Michael Blazek (1-0) worked two scoreless innings for the win and Kevin Ginkel pitched a 1-2-3 ninth for the save, coaxing a grounder to Herum at third base for the final out.

Jackson captured the Northern Division first-half crown with a 42-28 record before going 36-34 the rest of the way. Entering the playoffs as the No. 2 seed behind Montgomery, the Generals defeated the Biscuits in five games to advance to the Championship Series.

D-backs No. 17 prospect Domingo Leyba was named Championship Series MVP. Despite going 0-for-4 on Saturday, the native of the Dominican Republic native was 6-for-14 with four RBIs and hit a three-run homer in Game 3.

"I'm speechless," Duncan said. "I'm just so proud of these guys and what we were able to accomplish this year."