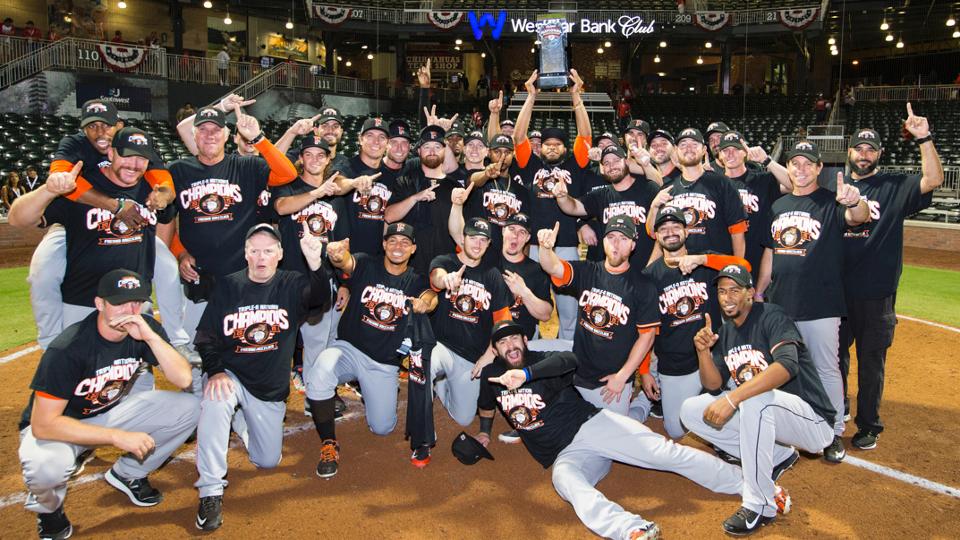 The skipper of the Triple-A National Champion Fresno Grizzlies knew that what his team had accomplished was special, because it was building toward something bigger.

"Our goal is to develop winning players and give the Astros a chance to compete," he said.

This season, the Grizzlies were able to do both. They claimed their first Pacific Coast League Championship on Sept. 20 before taking the Triple-A crown two days later and all the while cultivated several talented players who would prove key in the big league club's playoff run.

"It's been a rough couple of years [for the Astros]," DeFrancesco continued. "But I think what we're seeing of these young players and where we're headed, I think there's a lot of talent that's going to keep coming through the pipeline here."

Back in April, the Grizzlies set out with high hopes for the 2015 season.

"I knew we had the talent," recalled DeFrancesco. "I knew what was coming through the system. We had a nice group of guys that were coming ready to compete, we knew we had some good starting pitching, and we had a nice nucleus that just got better as the year went on."

Of course, any talented Triple-A team affiliated with a contending big-league club is going to face a ton of roster turnover, and Fresno was no exception. Tucker played in 33 games for the Grizzlies before moving up to Houston in May, where he became the team's starting left fielder. Meanwhile, after a brief appearance in the bigs, Santana was packaged on July 30 to the Brewers in a trade for Major Leaguers Carlos Gomez and Mike Fiers.

Luckily, the Grizzlies had the luxury of filling those holes with even more exciting young talent. Shortstop Carlos Correa, at the time the Astros' top prospect, made the jump from Double-A Corpus Christi in May on his way to the Majors. A month later, No. 11 prospect Tony Kemp, No. 23 Andrew Aplin and top pitching prospect Mark Appel had joined the fold as well.

"This is my 12th year in Triple-A, and most of the time you have a lot of veteran guys, insurance policies, guys who are going to go up and down," said DeFrancesco. "It was nice to have a bunch of prospects with us, a group of guys that were hungry and, I mean, look where it led us this year.

"I think every time a guy got an opportunity [in the Majors], some of the other guys got hungrier. They wanted a piece of that, and hopefully in the future some of those guys like Fontana, Aplin, Tyler White are going to go up there and contribute and give the Astros another weapon."

The Grizzlies rolled to 84 wins during the regular season, a franchise record that was good for second in Triple-A. They flashed remarkable consistency by finishing with a winning record each month.

At the forefront of Fresno's attack was Duffy. The 26-year-old Boston native batted .294, slugged 20 homers and drove in 104 runs on his way to garnering PCL MVP honors at the end of the season.

"No doubt I think Matt was a big, big part of the offense -- solid corner guy, first and third," said DeFrancesco. "Got a chance to play in the Major Leagues and was on a playoff roster. We're pleased with his development.

"Overall though, offensively they led in just about every category -- from walks to runs scored to on-base percentage. They were just a great group of guys, and they bought into our team concept."

If their league-leading offense didn't convince those on the outside that the Grizzlies were contenders, a sizzling stretch at the beginning of August went a long way toward allaying any doubts. The team burst out of the gates and won eight straight games from Aug. 1-8, then won 11 in a row from Aug. 11-21. In all, they claimed 19 of 20 games while outscoring opponents, 137-65.

"I was amazed," said DeFrancesco. "I've been doing this a long time. I've never seen a run like that. You have a couple five-, seven-game winning streaks. But to go 19-1, you never think you're going to lose a game. The confidence and the way the players were performing was pretty incredible.

"You have to give our staff a lot of credit. Pitching coaches ... guys who came every day to work and got these guys locked in. Probably the [most fun] moments in my career managing, to go on that kind of record."

The streak helped Fresno become the first division winner in the Minors on Aug. 26, the franchise's first Pacific Northern Division title since 1998.

Mark Appel and Chris Devenski couldn't be more different. The former was taken No. 1 overall by the Astros out of Stanford University in 2013 and sports a nasty upper-90s fastball, while the latter was taken in the 25th round, 771st overall, and attacks hitters with a sneaky changeup.

Yet the two had one thing in common in 2015: they both dealt the Grizzlies a championship.

Before they could think about trophies, however, the Grizzlies had to weather another tough loss as Duffy was summoned to the Majors right before the PCL Championship was set to begin.

"We just took it in stride," DeFrancesco said. "We're rooting for the best for Duff, and to get an opportunity to be a Major League player, that's everybody's dream. The next man up is who's going to play third base. Tyler White stepped up offensively, and we gave our guy Jon Singleton a chance to go out there and get in the field."

Sure enough, Duffy's departure opened the door for White, the organization's No. 30 prospect who caught fire in the playoffs with three homers and a .359 average. Fresno rolled past El Paso in the best-of-5 semifinals, 3-1, then battled back from a 2-1 deficit against Round Rock in the Finals to knot the series at 2-2.

DeFrancesco turned to Appel, who had endured a shaky regular season since coming up from Double-A. The right-hander responded with one of his finest starts of the season, limiting the Express to three runs over 5 2/3 innings as the Grizzlies won, 7-3, to clinch the PCL Championship.

Two days later, it was Devenski who got the nod in place of the recently promoted Straily. In his first start at Triple-A, the 24-year-old from Long Beach, California, dominated Columbus over seven one-hit innings, and the Grizzlies were champions again.

"It feels good," Devenski said after the game. "In my mind, I don't want the season to end, but it was good to finish like that. It's pretty fun right now, ya know? National champs."

DeFrancesco will be back next season. So will many of the prospects who formed the core of the team's championship run, with a few more ready to knock down the door from Double-A.

In the eyes of the veteran manager, this season may be just the beginning of a new tradition of winning in Fresno.

"For the city of Fresno, it's the first time [winning a championship] in a long time," he said. "It's a new organization and a chance to watch some of these young players get up to Houston and watch them in the playoffs. I think it doesn't get better than that. That's fitting, and we're pleased for the front office who gave us an opportunity.

"It was some pretty exciting crowds for the playoffs. The players just rode it, and we'll see which way it takes us, but there's still going to be some great players coming through. I mean, that's what it's all about. It's an organizational win. We're really happy where we got to."

Alex Kraft is a contributor to MiLB.com. Follow him on Twitter @Alex_Kraft21. This story was not subject to the approval of the National Association of Professional Baseball Leagues or its clubs.