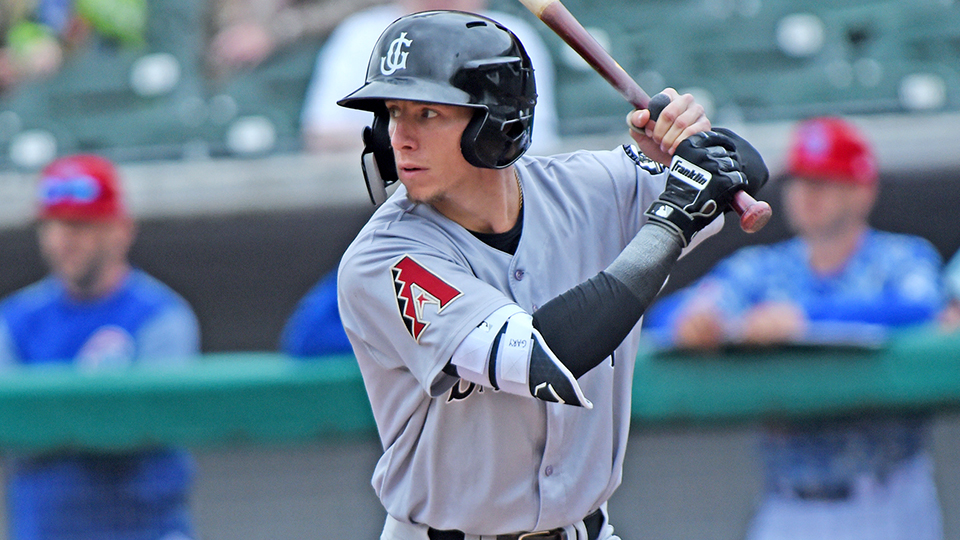 Galli Cribbs was an unorthodox cycle candidate. He entered Wednesday with a career slash line of .208/.290/.273 and had hit only two homers over 313 games in the Minor Leagues.

So he completed his first cycle in an unorthodox manner.

The D-backs prospect pulled off a reverse natural cycle -- hitting an inside-the-park homer, triple, double and then a single -- to lead Double-A Jackson to an 8-1 win over visiting Birmingham on Wednesday afternoon. The four hits marked a career high, as did the three extra-base hits.

Cribbs' cycle was the first in the Southern League since Chris Curley pulled off the trick for Jacksonville on June 1, 2016, and the first by a Jackson player since Abraham Almonte's effort on April 27, 2013.

"This is the first one for me anytime, anywhere," Cribbs said.

Batting from the eighth spot in the lineup, the left-handed hitter got his day started with a shot down the left-field line off Barons right-hander Jordan Stephens. Cribbs was already headed for extra bases, but a tricky bounce off the wall caused the ball to carom into center field. He got the green light from manager/third-base coach Shelley Duncan and raced for his third career home run.

"It's pretty cool," Cribbs said. "Jordan Stephens and I have been battling each other a long time, going back to even high school [in Texas]. He got two strikes on me and just left one up that I was able to get a barrel on. ... When I looked up at third, I saw Shelley telling me to keep going. I only had a little bit left in the tank because of the day game and a quick turnaround. But no matter what, I didn't expect that to be my first hit."

Cribbs, who started in right field Wednesday but has seen equal time at shortstop this season, tripled to left in the fourth and added a double to right off the Barons starter two innings later. Needing only a single when he stepped to the plate for his final plate appearance against righty Jorge Rondon, the Generals utilityman had cycle on the brain.

"We didn't have that many fans today, so I could hear people yelling, 'Just get a single' as I walked up," Cribbs said. "I hit it down the line [to left] to the warning track and just put my head down. The first-base coach told me to stay, but I guess the guy out there bobbled it a little and I got to second. It's kind of a sketchy way to get there with that being called a single and an error, but that's the way it goes."

Wednesday's feat was just the latest performance in what's been an incredibly hot start for the Bellevue University product, who hit just .170/.257/.216 with three extra-base hits in 29 games for Jackson a season ago. He has multiple hits in three straight contests and six of his 11 games with the Double-A club.

He currently leads the Southern League with a 1.400 OPS and has a .486/.571/.829 line through the first two weeks of the season. He credits his strong start to offseason work that began as early as January in D-backs camp with coaches such as Jonny Gomes. He showed signs of progress during 12 appearances in the Cactus League, going 6-for-14 (.429) with a triple and a double on the Major League side of camp.

"I've been using a different mentality, kind of a standoffish mentality really," he said. "I'm trying to do damage every time and trusting the work I put in. I used to be always guessing and thinking I needed a hit every time I was up there. It wasn't weak exactly, but baseball's already hard enough without trying to get a hit every time on my mind. I've tried to silence my mind in the box, and that's working incredibly well."

Before 2018, his one and only Minor League home run came on July 22, 2016 with Class A Advanced Visalia. Cribbs, who's doubled that total this season, isn't likely to become a power hitter, but then again, he didn't look like a cycle candidate entering Wednesday either.

"I think it's just a funny start," he said. "I don't know what I'm capable of yet this year because it's only April. I don't have a number I'm shooting for or anything like that. I'm just trying to stay consistent because I haven't been this hot a hitter in my life really."