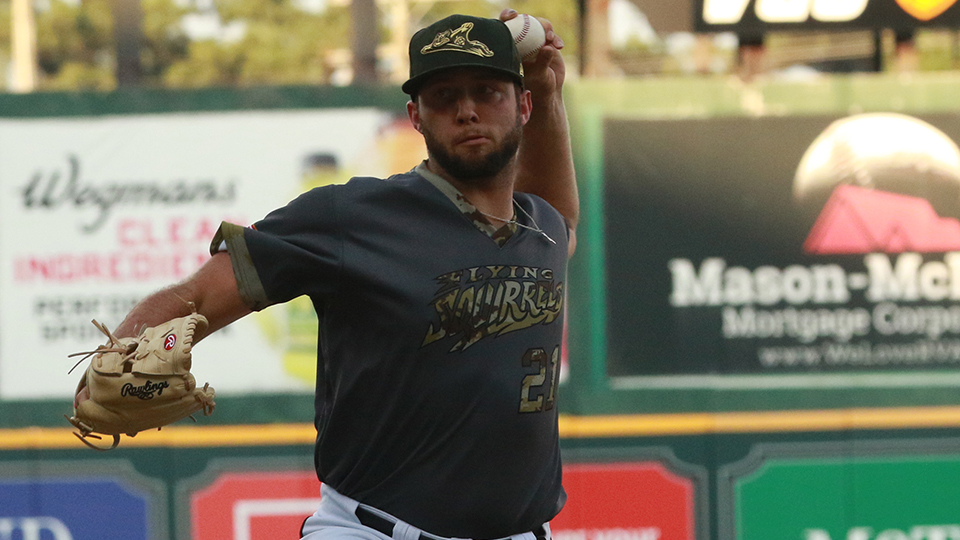 Garrett Williams' numbers through his first 10 starts of the year weren't pretty: 1-6 with a 5.18 ERA. In his last five outings, he's been a star.

The Giants' No. 19 prospect turned in the fourth scoreless start in his last five, allowing one hit and recording a season-high nine strikeouts over seven innings as Double-A Richmond blanked Hartford, 4-0, on Saturday at The Diamond.

"I was able to keep our offense in the game, not allow them to score any runs," Williams said after picking up his first win since May 1. "They had one hit, base hit up the middle in the first inning, and after that, I settled in. I felt good throughout the game, had all my pitches working tonight, was able to pitch off my off-speed and fastball."

Colton Welker, MLB.com's No. 57 overall prospect, walked with two outs in the first and Rockies No. 6 prospect Tyler Nevin followed with a single to center, but Williams wriggled out of that jam and hardly faced another the rest of the way. The southpaw retired nine straight Yard Goats after Nevin's hit and 18 of the final 20 batters he saw.

"I think it was just staying ahead in counts. I only had a few counts where I was behind today, so once I was ahead in the count, I could really just mix and match my pitches off of that," he said. "The curveball was really on today, had some good depth to it and was coming out like my fastball. I was able to throw those off of each other and get some swings and misses when I needed to and some groundouts when I needed those, too."

The quick innings provided a rhythm for the Flying Squirrels.

"It's big for our offense, getting our bats back in the lineup," Williams said. "Having quick innings helps our guys in the field's legs stay fresh. It gets them back in the dugout with the bats and try to get some runs for the team. I think it's a big momentum change. Obviously, it helps to get deeper into games with fewer pitch counts."

The 24-year-old has given up one hit in three of his four scoreless outings since June 6 and boasts a 1.33 ERA in his last five appearances, striking out 28 over 27 innings while posting a 1.07 WHIP.

"I think it's just consistency for me, being able to make adjustments throughout the game to be consistently around the zone," said Williams, whose ERA has dropped from 5.18 to 3.63 in less than a month. "If I'm behind, I can use my off-speed to get back into pitching counts. Relying on that, letting my fastball movement run and get ground balls with it and just trusting my stuff, I think that was a big key for me. Making adjustments throughout the game, allowing my balls to take their natural movement, and I'll go from there.

"For me to be like this later in the season, it's big confidence for me, obviously. I know the stuff is there, so I've just got to trust in my stuff, take these outings, learn from them, keep going in the right direction knowing that my command is going to get better. Just making adjustments during the game, I've got big confidence right now and I'm hoping to make a difference."

Chase Johnson followed Williams and retired all six batters he faced, five on ground balls, to secure his first save since the 2016 season and nail down the Flying Squirrels' sixth shutout.

Giants No. 28 prospect Jalen Miller tripled, singled and picked up two RBIs as Richmond bookended its night with two runs in the first and two in the eighth.