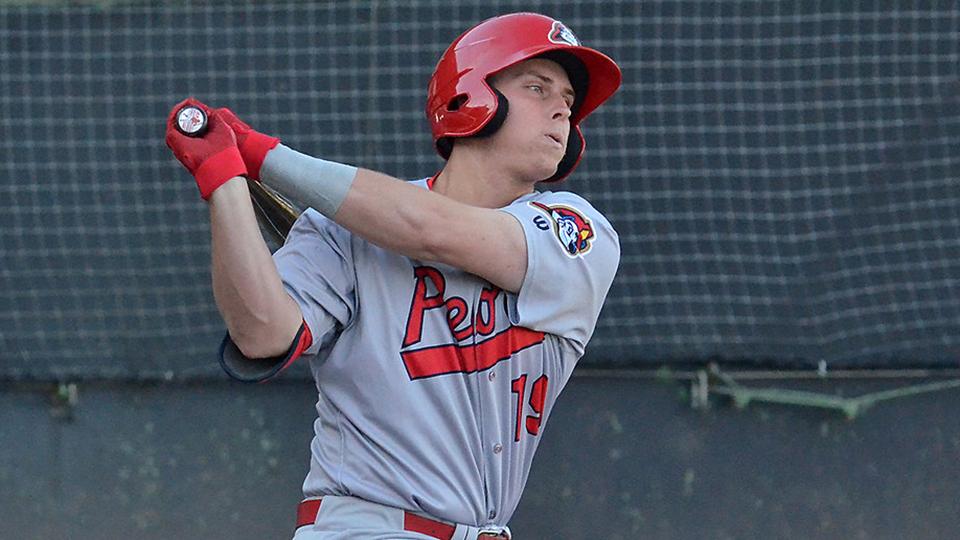 Nolan Gorman was promoted after ranking eighth in the Midwest League with 108 total bases over 67 games. (Paul R. Gierhart/MiLB.com)

St. Louis' top prospect drove in five late runs to lift Class A Advanced Palm Beach past Clearwater, 12-8, in the nightcap of a twinbill at Spectrum Field.

The five RBIs tied a career high for the 19-year-old, who drove in five runs on April 8 as part of a two-homer effort for Class A Peoria. Gorman was named a Midseason All-Star with the Chiefs before being promoted to the Florida State League on June 20. He posted a .241/.344/.448 slash line with a .792 OPS and 27 extra-base hits, 41 RBIs and 41 runs scored over 67 Midwest League games.

Through his first 16 games with the Cardinals, the 2018 19th overall pick batted .197 with three extra-base hits and one RBI. He drastically turned those numbers around in his final two plate appearances against the Threshers.

After going 0-for-4 in the first game and 0-for-3 to that point in Game 2, Gorman stepped to the plate with the bases loaded and one out in the sixth. His club trailed, 5-4, and southpaw Zach Warren had entered the game for the lefty-lefty matchup. After falling behind, 0-2, Gorman worked the count full. The next offering from Warren came in belt-high, over the middle of the plate and the 6-foot-1, 210-pound infielder hammered it into right field for a bases clearing, go-ahead triple.

Two batters later, Gorman was thrown out at home on a fielder's choice.

Clearwater retook the lead, 8-7, on RBI knocks by 11th-ranked Phillies prospect Jhailyn Ortiz and No. 18 Nick Maton in the home half of the inning.

But MLB.com's No. 30 overall prospect delivered the go-ahead blow again. With two out and the bases loaded in the seventh, Gorman punched a ground ball through the left side of the infield off southpaw Keylan Killgore -- who had just checked into the game -- that plated Imeldo Diaz and 22nd-ranked Wadye Ynfante for a 9-8 advantage. St. Louis' No. 21 prospect Luken Baker brought in Gorman on a two-RBI double, and the Cardinals posted their second consecutive five-run frame to secure the victory and earn a split of the doubleheader.

The Phoenix, Arizona, native raised his average to .212 and is sporting a .333 slugging percentage at the new level.

Diaz and Julio Rodriguez recorded three hits and a pair of RBIs apiece. Diaz doubled and scored twice while Rodriguez clubbed a solo shot to left in the fourth.

Maton, 19th-ranked Rodolfo Duran and Luke Miller recorded multi-hit efforts for Clearwater. Maton drove in a run and scored, Duran laced an RBI double in the fifth and Miller went yard, walked, drove in a pair of runs and scored twice.

The Threshers won Game 1, 7-2. Ortiz and Philadelphia's No. 20 prospect Daniel Brito led the way with three hits apiece. Ortiz finished a double shy of a cycle, driving in two runs and scoring twice. Brito went 3-for-3 with a walk, an RBI and a run scored.