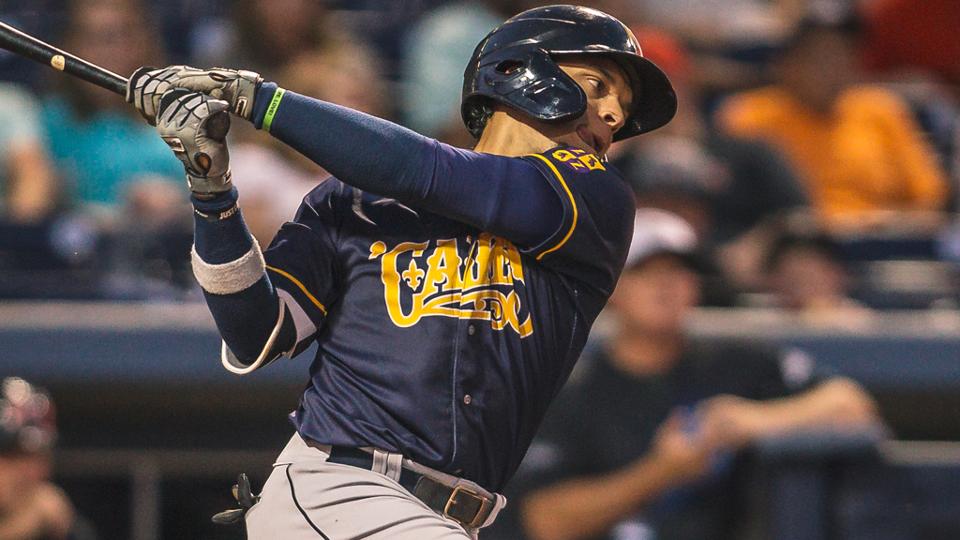 Isan Diaz launched a career-best 26 homers at Triple-A before being promoted to the big leagues. (Dave Wegiel/MiLB.com)

The Marlins are far enough along in their lengthy rebuild that the Minor League crops are beginning to blossom. Over the 2019 season, Miami developed in-house talent and utilized a combination of Draft picks and trades to become one of the most loaded systems in the game. The club's top six prospects (Sixto Sanchez, JJ Bleday, Jesus Sanchez, Jazz Chisholm, Monte Harrison and Edward Cabrera) all cracked MLB.com's Top 100 Prospects list, and both Class A Clinton and Class A Short Season Batavia reached the postseason.

For Marlins director of player development Dick Scott, that's all great news. But in his eyes, the biggest change the Marlins made extends much deeper than stat lines or projections.

"We're creating an environment that players like to come to and be a part of," Scott said. "That's a tribute to our coaches. ... I think we've changed the environment at our complexes, the way we treat our players and the way our players go about their business."

After back-to-back last-place finishes in the National League East, a change in culture is undoubtedly a good thing. Combine that with an influx of young, impressionable talent and the Marlins may be closer to climbing out of the cellar than previously imagined.

Catcher -- Tyler Heineman, Reno (25 games), New Orleans (48 games) Miami (five games): Acquired from Arizona in early June, Heineman quickly emerged as a standout player at a position without much organizational depth. Playing in his third system in as many seasons, the 28-year-old hit his way to a .341 average and a career-high 1.019 OPS in 48 games with the Baby Cakes. He also legged out 12 doubles and a pair of triples while ripping 10 homers. Heineman caught 371 innings for New Orleans and threw out 12 of 27 would-be base stealers (44.4 percent).

Second baseman -- Isan Diaz, New Orleans (102 games), Miami (49 games): Diaz emerged at the start of the year as one of Miami's top prospects, and a monster season in the Pacific Coast League propelled the 23-year-old to the big leagues for the first time. Diaz put up a .305/.395/.578 line at Triple-A while drilling a system-best 26 homers and driving in 70 runs to rank second. He was a PCL midseason and end-of-season All-Star.

Diaz homered in his big league debut on Aug. 5 while his father was being interviewed on the television broadcast. However, the 23-year-old did falter a bit in his first Major League stint, hitting .173. That's of little concern to Scott.

"One of the reasons we sent Diaz up was to prepare him for the upcoming year," he said. "There's always a learning curve when guys go to the Major Leagues. ... The transition to the Major Leagues was probably a little slower than he anticipated. I think coming off such a big year in Triple-A and going to the big leagues, he thought there might be a carryover. It doesn't always work that way.

"I'm very confident -- as is the rest of the organization -- that he'll be ready to go by next spring. He's got power to all fields and is going to be an above-average second baseman. There's nothing not to like about his game."

Third baseman -- Nic Ready, Batavia (67 games): The Air Force Academy graduate led the system and the New York-Penn League with 30 two-baggers while tying Vermont's Jordan Diaz for tops on the circuit with 47 RBIs. Selected in the 23rd round of this year's Draft, the son of former Major Leaguer Randy Ready put up a .263/.311/.508 line and belted 10 big flies in an impressive professional debut.

Shortstop -- Demetrius Sims, Clinton (43 games), Jupiter (62 games), GCL Marlins (four games): Despite two stints on the injured list, Sims combined to bat .268/.365/.412, holding the second-highest average among shortstops in the system. The 24-year-old also showcased some power. After homering once over his first two pro seasons, he belted seven this year.

Honorable mention: No. 4 Marlins prospect Jazz Chisholm made the most of his 23 games with Jacksonville (.284 average, .977 OPS) after being acquired from the D-backs for Zac Gallen at the Trade Deadline.

Peyton Burdick, Clinton (63 games), Batavia (six games): Fresh off being drafted in the third round in June, Burdick slugged his way out of the New York-Penn League in six games. The Wright State product spent the rest of the season in the Midwest League, finishing with a combined .308/.407/.502 line and sliding into the club's top 30 prospects at No. 28.

"Peyton is a guy who's really athletic and has a lot of strength, too," Scott said. "We sent him to Clinton, which can be a pretty big jump, and he went in and just annihilated them. He was averaging almost an RBI a night. He hit homers, big hits, stole bases and plays good defense. He was really impressive."

J.D. Orr, Batavia (64 games): Most noted for his outstanding speed, the Marlins' 10th-round Draft pick has much in common with Burdick. They were college teammates, for one. Also, he dominated his respective league. Orr tied for the NYPL lead with a .892 OPS and paced the circuit with a .469 OBP, while his 29 stolen bases were one off the top mark. He hit a whopping .352 -- and notably to Scott -- he did it a variety of ways.

"He's a game-changer with his speed, but he really surprised us with how well he hit -- and I wouldn't say that can all be attributed to his speed. He's got some strength and can drive the ball," Scott said. "He's not just bunting and slapping the ball for hits. This guy can hit the ball in the gap and even has a little home run power that's starting to develop.

"I really think he's the type of guy where you have to credit the scouting department for finding a guy who was a good player in college and has tools, and getting him in the organization. I think we have a chance to have a really good organizational player that's going to have a chance to play in the big leagues."

Jerar Encarnacion, Clinton (68 games), Jupiter (67 games): Miami's No. 17 prospect led the system with 71 RBIs, ranked second in hits (140), third in doubles (26) and tied for fourth in homers (16). Encarnacion spent the first 2 1/2 months of the season with the LumberKings, earning a Midwest League All-Star selection before finishing in the FSL.

"Jerar was my sleeper pick coming into the start of the year," Scott said. "This guy has a ton of power. ... I think he's a guy that has a chance to be an impact guy at the Major League level. He's still young, and it is hard to project a couple of years down the road, but if you look at a player in our system that could be an impact bat and and impact player, that guy comes to mind."

Designated hitter -- Evan Edwards, Clinton (68 games) Batavia (five games): Selected out of North Carolina State in the fourth round of this year's Draft, Edwards is another player who raced through short-season ball in his rookie campaign. He pounded eight long balls and plated 48 runs for the LumberKings while hitting .281 with a .799 OPS across two levels. The 6-foot, 200-pound first baseman gives the Marlins another promising lefty bat in their arsenal.

Right-handed starter -- Edward Cabrera, Jupiter (11 starts), Jacksonville (eight starts): Cabrera shined in his fourth professional season, going 9-4 with a 2.23 ERA and 0.99 WHIP across two levels. The Marlins' sixth-ranked prospect held opponents to a .190 average and whiffed 116 while walking 31. He also tied the Jupiter franchise record when he struck out 13 over 6 2/3 innings on May 1.

"When you talk about [Cabrera], it's big stuff," Scott said. "He has three pitches that he throws for strikes -- he's got a power fastball, a curveball over a slider, which I think nowadays plays up, and excellent feel for a changeup for such a young guy. He still has some room to grow, of course, but we're really excited for this guy. We think he has a chance to be a top of the rotation kind of pitcher."

Scott hinted that Cabrera could start next season at Triple-A, where he will be challenged to set up hitters.

"Right now, he 'out-stuffs' guys at the levels that he's pitched at," Scott said. "He's going to have to make some adjustments to how he attacks hitters. He can't just overpower them with his fastball or try to throw his breaking ball."

Left-handed starter -- Trevor Rogers, Jupiter (18 starts), Jacksonville (five starts): The 2017 first-rounder notched a career year, nailing down a 2.90 ERA over 136 1/3 innings. Ranked eighth in the system, Rogers led the organization with 150 strikeouts while limiting himself to 33 walks.

"This year, his confidence jumped and he started to attack hitters and take control," Scott said. "He's a quiet kid by nature, but I think that he really came into his own this year."

Relief pitcher -- Alex Vesia, Clinton (19 games, one start), Jupiter (10 games) Jacksonville (nine games): In a breakout season highlighted by two promotions, Vesia put up a 1.76 ERA and 0.95 WHIP across three levels. He also had a 5.26 strikeout-to-walk ratio, amassing 100 punchouts on the year. Most notably, when moved up to the Southern League, the 23-year-old did not allow a run in 16 1/3 innings, fanning 25 and walking one in that span.

"What a fantastic year he had," Scott said. "He was kind of an under-the-radar guy, but this guy has really put himself on the map. It's a credit to him and the pitching coaches he's worked with. For him to do what he did this year was truly remarkable."