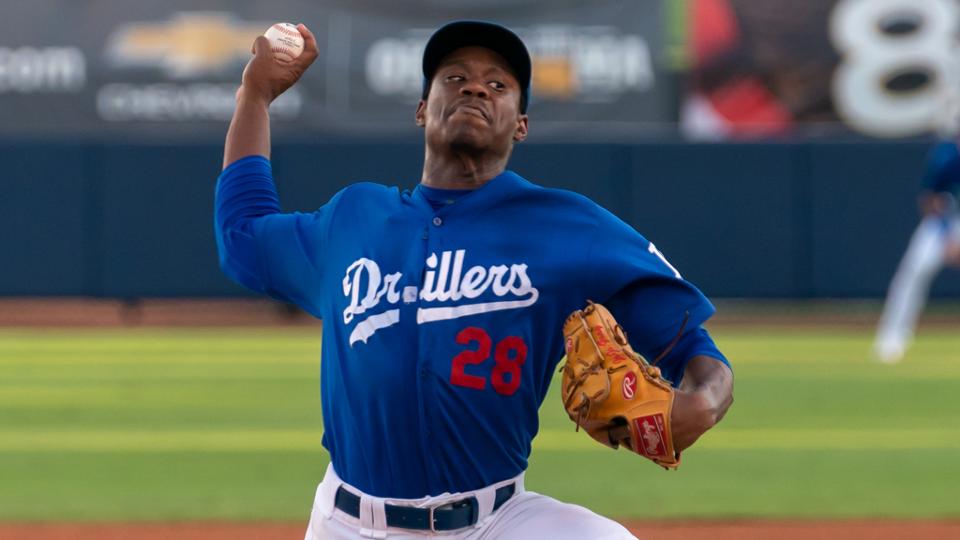 Josiah Gray held opponents to a .207 average while climbing to Double-A in his first full season. (Tim Campbell/MiLB.com)

"Those are all byproducts of process and it all affirms what we're doing," Dodgers director of player development Will Rhymes said. " ... We strive to foster a culture of winning. The players know that we value [winning] through the levels. ... And we know how important it is to managers and staff at the affiliates to win."

Rhymes noted that Wong would have started the year with Double-A Tulsa had he not been "a victim of depth at the position" (hello, Will Smith and Keibert Ruiz) while emphasizing that the former University of Houston shortstop has "true versatility" and "could be a strong Major League defender at multiple positions."

First baseman -- Connor Joe, Oklahoma City (105 games), San Francisco (eight games): Claimed by the Reds in December and traded to the Giants in March, Joe landed back with the Dodgers after San Francisco designated him for assignment in early April. He responded by leading full-season Dodgers farmhands (and finishing third in the Pacific Coast League) with a .426 on-base percentage while bashing 15 homers and 26 doubles

"He established himself [in 2018] as an incredibly high-quality at-bat ... " Rhymes said. "He kept on the same exact path, and his walk rate went up to a ridiculous level [16.1 percent]. The ability to do damage while not striking out -- in today's game -- is rare, and he increased his versatility by playing all four corners."

Second baseman -- Zach McKinstry, Tulsa (95 games), Oklahoma City (26 games): McKinstry set career highs in batting (.300) and dingers (19) while tying for third in the system in hits (129) and placing in the top 10 in doubles (T-ninth, 24) extra-base hits (eighth, 49) and total bases (seventh, 222). Although he spent the bulk (440 2/3 frames) of his defensive innings at second, the Dodgers consider him "above average" there and "a legitimate defender" elsewhere. The Central Michigan product could primarily play shortstop in 2020.

"He had a really good offseason last year. He stayed at [Camelback Ranch]. He filled out his body and got a lot stronger, and as soon as the calendar turned, a lot of us noticed how much better his bat path was," Rhymes said. "He was able to access more of the field and show more power, and he retained the ability to make contact."

Third baseman -- Miguel Vargas, Great Lakes (70 games), Rancho Cucamonga (54 games): Vargas, who defected from Cuba in 2015, signed at the end of 2017 and doesn't turn 20 until Sunday, posted the second-highest average among full-season Dodgers Minor Leaguers (.308, behind Lux's .347) in his first long pro season. He whacked 38 doubles while stealing 13 bags, and his seven roundtrippers may multiply someday.

"He's absolutely the exact kind of guy where you can see the power developing later. If you were looking for the perfect foundation for a hitter to develop power -- gets on base, hits for a high average, low 'K' rate, ability to use right field -- [you'd find it in Vargas]," Rhymes said. "His bat speed increased significantly this year, and ... we expect to see a bump in bat speed again. ... He's an incredibly well-rounded hitter even if this was the extent of his power."

Shortstop -- Gavin Lux, Tulsa (64 games), Oklahoma City (49 games), Los Angeles (23 games): Lux led the system with 159 hits, 99 runs scored and 278 total bases and did more than enough to earn Dodgers Minor League Player of the Year honors. The 2016 first-rounder turns 22 on Nov. 23, but he forced a promotion from Double-A by June, then was even more impressive at Triple-A. After spending 473 1/3 of his 625 defensive innings at shortstop in the Minors, he moved to the other side of the bag on the big stage in September -- and October.

"I don't know what to say," Rhymes said. "Across all the year [Minors and Majors], .330 [batting average] with a .557 slug. He hit 29 home runs and had 29 doubles. He developed into a legitimate run-producer. He addressed issues [against left-handed pitching]. He's one of the better hitters you're going to see. His at-bat quality was always there, and he gained strength. He's incredibly efficient."

Honorable mention: Jeter Downs, second only to Lux with 242 total bases and first in the California League with 33 doubles, would have claimed this spot in other systems.

Zach Reks, Tulsa (32 games), Oklahoma City (89 games): Reks? He sure does. Having batted over .300 each of the previous two seasons, the 2017 10th-rounder led the system with 93 RBIs and -- after entering the campaign with seven homers as a pro -- finished second with 28 taters.

"I'm no longer surprised by anything Rexy does," Rhymes said. "He was always a really, really good hitter, almost a magic wand type. ... We anticipated him starting to grow into his strength, and he has good at-bats and swings at the right pitches."

Kyle Garlick, Oklahoma City (81 games), Los Angeles (30 games): A proven basher in the system since turning pro in 2015, Garlick made the bigs for the first time this season. Before he got there, he hit 23 homers and 25 doubles while batting .314 in the PCL.

"He's a great story for us in player development and in scouting: he was a 28th-round pick and he repeated Double-A for parts of three years," Rhymes said. "This year, he made some adjustments and cut down on the miss, and we saw the performance spike.

"On paper, I think he was our best performer on the Minor League side. That's pretty good, to lead this group of hitters in wOBA [.423, second to Lux's .437] and OPS [1.057, better than all comers -- including short-season players]. He's ... shown a lot of grit over time and he keeps getting better."

Andy Pages, Ogden (63 games): Pages amassed 153 total bases in 279 plate appearances and posted a 165 wRC+ -- highest among Dodgers outfielders who played at least 60 games. Despite being in Rookie ball -- and 18 years old -- he tied for 12th in the system with 19 homers and led the Pioneer League with 22 doubles. He also tied for tops on the circuit with 57 runs scored and second with 55 RBIs. The Pioneer League favors sluggers, but ...

"The underlying exit data supports that the performance was pretty real," Rhymes said. "There's a chance he's a special hitter. He's still 18, and next year there's going to be a huge challenge for him. We're really interested to see how he responds to a higher level of competition. ... He played some center field and he has an absolute cannon. The hit tool is there, too, and he's really bright. He really knows the game. He's a student of other people's swings. There are a lot of ingredients that are encouraging, in addition to the huge power."

Utility player: Edwin Rios, Oklahoma City (104 games), Los Angeles (28 games): Rios, who's long been among the system's most dangerous bats, led LA Minor Leaguers with 31 homers (and hit four more in the bigs). In the past, he's faced questions about his defense; this year, he played four positions but took ownership of the hot corner.

"He's made such progress at third base," Rhymes said. "That's where he's made the biggest strides. He was always a very confident defender at third base in practice and it was just a matter of him gaining confidence in games. This year, we saw it. He's worked really hard ... on his agility, and that's one more thing that gave him confidence."

Honorable mention: Devin Mann played second base and third while giving the Quakes 19 dingers and a .358 OBP in 98 games.

"It was close to the dream season. I don't know how much better he could have done. In a first full season, to go three levels and finish at Double-A is just remarkable," Rhymes said.

"He was completely unfazed. We had to keep [promoting] him in an attempt to present him with a challenge, and I'm not sure he found it. .. He gave up only four home runs the entire season [counting the Texas League playoffs]. … And he's a flyball pitcher -- his groundball rate is in the 30s [37.8 percent, per Fangraphs]."

"Consistency, his mix, his intelligence on the mound, an ability to affect hitters' timing. … Plus, he fearlessly throws the ball over the plate," Rhymes said. "He missed a lot of bats this year, which was an interesting development. His changeup has been really good -- that's been the separator -- and he's worked on his slider. The big thing is that he's a competitor: he's not scared."

Honorable mention: John Rooney had a 2.84 ERA over 20 starts between Great Lakes and Rancho Cucamonga.

Relief pitcher: Logan Salow, Rancho Cucamonga (27 games), Tulsa (16 games, two starts): Salow held opponents to a .153 batting average while fanning 93 over 62 1/3 innings, posting a 2.31 ERA and going 5-for-5 in save opportunities. From May 1-June 30, he allowed one run in 17 appearances. His totals are what they are, despite hiccups following a promotion to Double-A. Over 19 1/3 innings in the Texas League, he walked 21 (after issuing 22 free passes in 43 innings in the Cal League). Still, he averaged more than a punchout per frame with the Drillers.

"Logan has a special fastball and he improved his ability to land the curveball for strikes," Rhymes said, shrugging off the rough stretch. "It was just a matter of him getting back to strike one. His pitches play so well in the zone, he doesn't need to do anything else."

Honorable mention: There's as strong a case to be made for Brett de Geus, who posted a 1.75 ERA between Great Lakes and Rancho Cucamonga.