Cougars' philanthropy is a grand slam 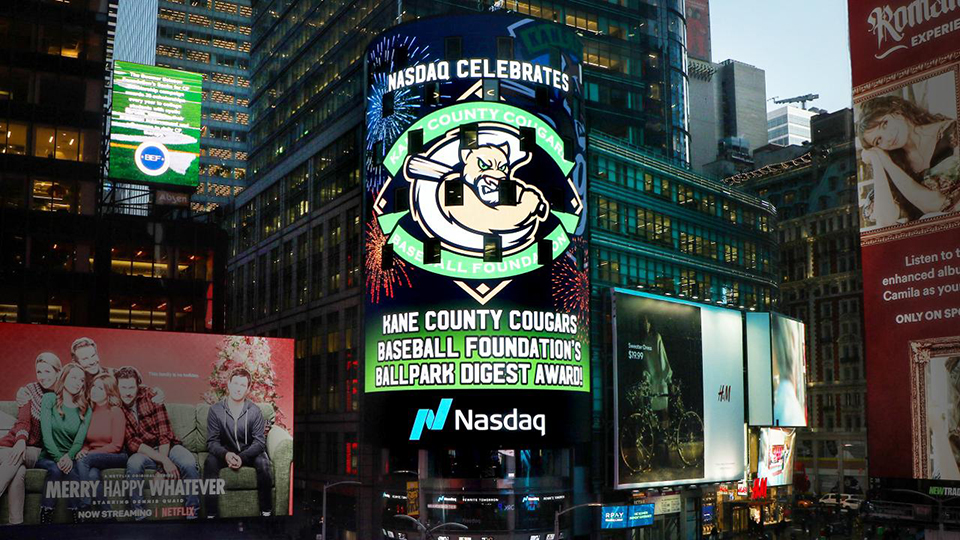 Kane County was honored last month on the Nasdaq MarketSite Tower that looms over Times Square in midtown Manhattan. (Nasdaq)

It helped create the type of personal culture that Dr. Bob -- as he's affectionately known -- wanted to establish in his franchise, which celebrates its 30th anniversary in 2020. The Froehlichs have made Kane County one of Minor League Baseball's preeminent philanthropic organizations. The franchise's charitable standing is something Dr. Bob holds close to his heart.

The purpose of the club may be to develop, cultivate and promote professional baseball players, but that's only part of the story.

"When we bought the team midway through 2014, [the board of directors] felt very strongly about one thing: when you have a business that takes on the name of a community, that's a privilege," Froehlich said. "With that comes a real responsibility to live up to the community you represent. We wanted to be a leader in giving back, and everything we do reflects on the community we are named after. We purchased the Cougars with the idea that we could do something really special off the field as well as on the field. We tried to look for some fun and different ways to do that."

The Cougars once again raised over $1 million for charity in 2019. (Kane County Cougars)

The Kane County Cougars Baseball Foundation has become a beacon in the Geneva, Illinois area. Located approximately 35 miles from Chicago, the foundation has found plenty of opportunities to spread its ever-growing reach, which has achieved new heights under the Froehlichs. The foundation exceeded $1 million in 2019, marking the second consecutive year it exceeded that noteworthy threshold.

Kane County ranked fifth overall in 2018 in MiLB's Charity Report, which covers charitable giving for all 160 Minor League teams. It's been in the top 10 for two consecutive years. Since Froelich's first full season as owner in 2015, the foundation has donated more than $4 million, increasing the total by 1,500 percent in that span.

"Our charitable endeavors are one of the few things we can control," Froehlich said. "We're so proud of the players who have come through here and gone on to play in the Majors. Yet at the end of the day, I don't have anything to do with that. Giving back, raising funds and reaching out to the community ... that is something we as an organization have 100 percent control over. And that's what makes it special."

"We were absolutely shocked [at winning the award]," Froehlich said. "To be recognized by people other than those in your own community really makes it extra special. It was a thrill to be at the Winter Meetings and be able to rub elbows with folks from Major League Baseball and our Minor League peers. There are a number of awards given out that have special meaning and all are great in their own way, but at the end of the day, I don't think it gets better than being honored for giving back."

There was an added bonus. Froehlich's daughter and fellow board member, Stephanie, is an executive on the Nasdaq Stock Market. After earning the Commitment to Charity Award, the Cougars found themselves on the Nasdaq MarketSite Tower looming prominently over Times Square in the heart of New York City.

"We're fortunate that our team is a family business," Robert Froehlich said. "With Stephanie a part of Nasdaq, she helped us get a little recognition and a congratulatory note for what we accomplished. Our organization was the first-ever MiLB Foundation to be featured on the Nasdaq MarketSite Tower. That was a thrill for the entire organization and community."

As 2020 unfolds, the Cougars Baseball Foundation looks forward to another special year -- on and off the field. The D-backs' Class A affiliate manages 24 individual charity programs, the largest number in the foundation's history. These programs provide cash contributions to 32 community organizations, also the largest number of recipients in the entity's history.

Some of the highlights from 2019 include the Cougars Reading Club reaching more than 450 schools, with 138,000 students participating in the reading incentive program. The foundation's Military Outreach touched more than 1,100 current and former service members, while the Senior Citizens Outreach reached more than 2,500 area citizens over the age of 65. The foundation also operates two scholarship programs that issue six scholarships to grade-school children as well as five college scholarships.

"All organizations want to give back to the community they're involved in," Froehlich said. "What I think we've done well is find fun and unique ways to do it. It's a collaborative effort, and we're always open to new ideas. ... The foundation isn't doing this for its own publicity. Each of our efforts have different variables attached, but the one constant is leveraging the money to make things grow even further. If we're able to get the names of businesses or other causes out there to our fans and the rest of the community, we consider that a success."

Two new programs were implemented last year, expanding the organization's community outreach with Mental Health Awareness and Deaf Awareness Night. Local charities were selected that focus on improving the quality of lives for those who deal with mental illness and hearing impairment. Both initiatives were well received.

"Our goal has always been not only to give back to our community, but also to honor the people within our community," Froehlich explained. "Each of our programs is focused on how we can give back, and it has helped us strengthen our community relationships. When people hear the name 'Kane County Cougars,' they know we're about more than just baseball."