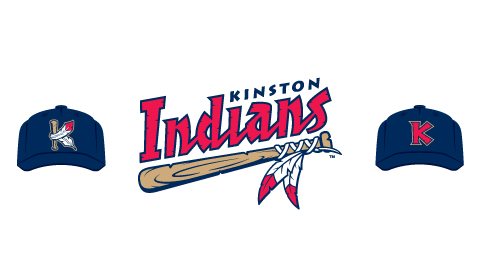 The Kinston Indians unveiled their fresh and updated look today at Historic Grainger Stadium, celebrating their first major logo and uniform change since 1995.

New K-Tribe caps and other merchandise are available for purchase now at kinstonindians.com or at the Indians front office at Historic Grainger Stadium.

Studio Simon teamed with the Kinston Indians to create the updated K-Tribe identity. Studio Simon has worked with over 50 affiliated and independent minor league clubs in 20 leagues on the development of complete brand identity systems and numerous other projects to help support and build those brands.

In addition to their work in the world of minor league baseball, Studio Simon's extensive, international list of clients encompasses virtually the entire sports landscape, including football, basketball, hockey, golf, horse racing, track and field and more, and they have worked directly with leagues and teams to brand the sporting world's biggest events and finest venues. Their portfolio of work in the aforementioned areas includes the official marks for two Super Bowls and two NFL Pro Bowls, as well as the venue graphics for Dodger Stadium, the venue mark for Philadelphia's Citizens Bank Park and the commemorative logo for the final season at the Hubert H. Humphrey Metrodome.

The K-Tribe is celebrating the 25th year of affiliation with the Cleveland Indians in 2011. The quarter century stretch is the longest running affiliation in the Carolina League and the third longest in all of A ball.