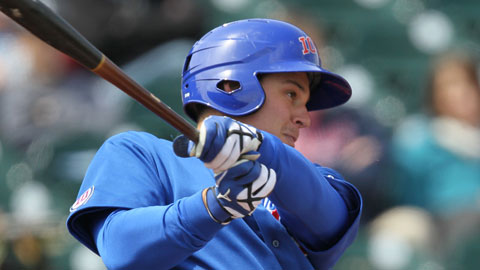 LaHair, 28, will receive the Joe Bauman Trophy and a check for $7,600, representing $200 for each homer he hit, at the Dec. 5 Baseball Winter Meetings™ Awards Luncheon at the Hilton Anatole in Dallas, Texas.

The Surprise, Ariz., resident, whose homer total broke the I-Cubs record, was remarkably consistent, going deep 19 times on the road and 19 at home at Principal Park. "I'm a big believer in day-to-day, simplifying it to each at-bat is just as important, and those kinds of things," LaHair said. "It really doesn't matter where I play. I just try to hit the ball hard."

Originally a 39th round pick out of St. Petersburg (Fla.) Community College by the Seattle Mariners in 2002, LaHair signed as a free agent with the Chicago Cubs in December 2009. Ian Gac of Winston-Salem and Tulsa's Tim Wheeler finished tied for second in MiLB with 33 roundtrippers.

The top home run hitter in each classification level, provided he is not the overall winner, receives $500. Wheeler (Double-A) and Gac (Class A) each paced their respective classifications. Eddie Rosario of Elizabethton clubbed 21 homers to lead all Short-Season/Rookie league players

LaHair was named the Pacific Coast League's Most Valuable Player earlier this month.