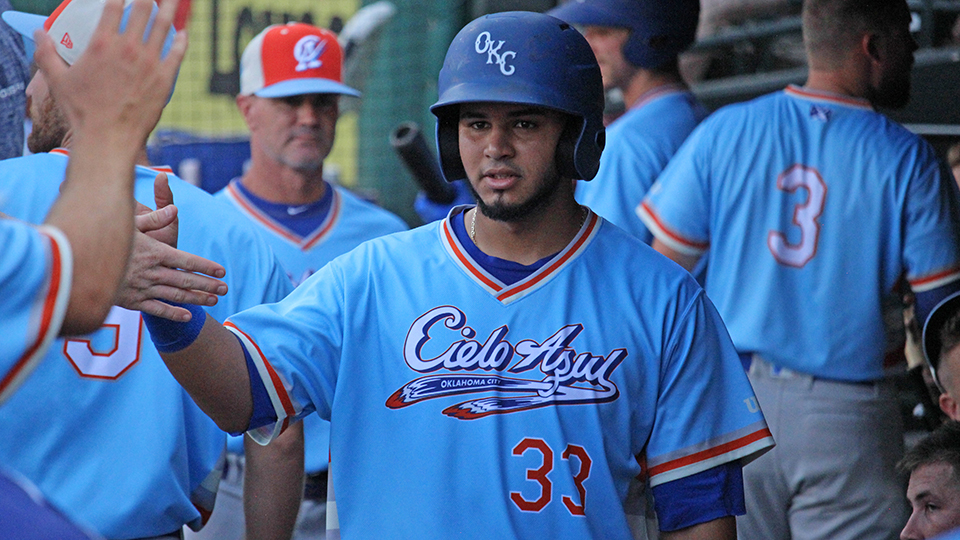 Keibert Ruiz is a .299 hitter in 379 Minor League games since making his pro debut in 2015. (Megan Filipowski/Oklahoma City Dodgers)

Keibert Ruiz looked neither nervous nor overmatched in his Triple-A debut. His new manager admitted that is exactly why he's there.

The top Dodgers prospect homered, singled and drove in a season-high four runs on Sunday to power Oklahoma City past San Antonio, 12-8, at Chickasaw Bricktown Ballpark.

"I don't think we were too surprised at what he did tonight," Oklahoma City manager Travis Barbary said. "He's so far ahead of the game at his age and has been since we first brought him into the organization. He put together some great at-bats tonight, but the thing that stands out is he fits into any environment. He handles himself well and he's not in awe of any situation."

MLB.com's No. 27 overall prospect singled home Dodgers No. 2 prospect Gavin Lux, who led off the bottom of the first inning with a triple. The 21-year-old added an RBI with a bases-loaded groundout in the second. After flying to right to end the third, Ruiz went the opposite way to left field for a two-run homer in the fifth that increased Oklahoma City's lead to 10-4.

He was replaced by pinch-hitter Rocky Gale in the bottom of the seventh.

"We put Keibert up at the top of the lineup because we have confidence in the quality of at-bats he has," Barbary said. "His bat-to-ball skills are off the charts. He doesn't swing and miss. It can be tough for a lot of young players, especially catchers. The game can get really quick but for Keibert, his heartbeat is the same all the time. When things go sideways, he maintains that even keel, collects his thoughts and makes good decisions. I can't say enough about his growth and maturity as a player from when I first saw him."

A noted two-way player who is an asset behind the plate despite his youth, Ruiz shined during his first domestic campaign in 2016. The Venezuela native batted .374/.412/.527 in 56 games in the Rookie-level Arizona and Rookie Advanced Pioneer leagues. He followed that with another strong campaign at Class A Great Lakes and Class A Advanced Rancho Cucamonga in 2017, when he topped .300 for third straight season.

Although Ruiz's average dipped to .268 in his first taste of Double-A last year, he offset that by slugging a career-high 12 homers in 77 at-bats and was rewarded for his efforts. The switch-hitter represented the Dodgers on the World squad at the 2018 All-Star Futures Game and was named to the Texas League All-Star and Arizona Fall League Fall Stars games. He represented Tulsa again at the midseason classic last month.

"He needed a challenge and I think coming here is good for him," Barbary said. "He has consistent, quality at-bats and we expect he'll continue to do that. He'll hit no matter where he's playing and I think getting him up here in a new environment and facing a new challenge gives him a chance to step up."

Spurred by Lux's 10th multi-hit effort in 18 Triple-A games, Oklahoma City scored in each of the first five innings. The 21-year-old reached base four times on a triple, a single and two walks while scoring twice. He's hitting .487 since he was promoted from Tulsa on June 27.

Dodgers No. 12 prospect Edwin Rios had three RBIs and fell a triple shy of the cycle, while Connor Joe hit a two-run homer, drove in three runs and walked twice. The 26-year-old went deep for the second game in a row and the third time in his last four contests to help Oklahoma City sweep the three-game series.

Dennis Santana (4-7) picked up the win in relief of starter Jaime Schultz. Los Angeles' sixth-ranked prospect allowed one hit over 1 2/3 scoreless innings without a walk or a strikeout. Schultz was tagged for three runs, two hits and a walk with two punchouts in the opening frame.

Travis Shaw and Nate Orf went deep for San Antonio, which has dropped three straight after winning 10 of 11.

Missions starter Johan Belisario (0-1) was charged with seven runs -- five earned -- on six hits and five walks while striking out one over three innings. The 25-year-old has surrendered 13 earned runs, 16 hits and six walks in five frames in his first two Triple-A starts.