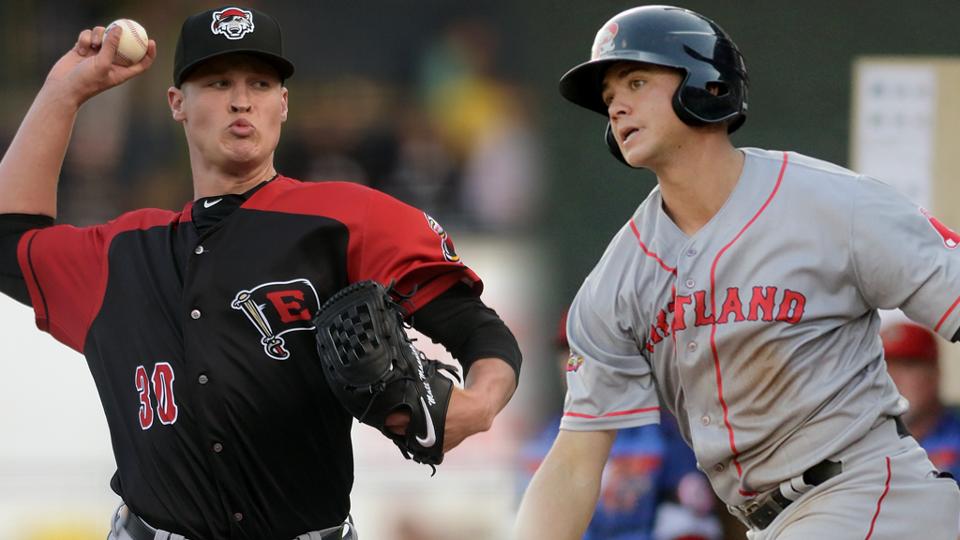 Matt Manning and Bobby Dalbec both proved themselves in their first tastes of the upper Minors at Double-A this season.

The Eastern League released its postseason All-Stars on Friday afternoon, and the team is led both at the plate and on the mound by familiar names.

Matt Manning and Bobby Dalbec both got their first extended exposure to the upper Minors this season and performed well enough to earn a spot on the Eastern League All-Star team. Manning is the lone representative of MLB.com's Top 100 on the list, as he slides in at No. 27 overall, while Dalbec is the No. 2 prospect in the Red Sox system.

Manning leads the circuit with 142 strikeouts at Double-A Erie and owns the only sub-1.00 WHIP among Eastern League qualifiers at 0.97. Overall, Manning is 11-4 with a 2.46 ERA, the latter of which ranks second on the circuit, while his 11 wins are tied for second with Akron's Jake Paulson.

Dalbec's .234 average may not stand out on the surface, but he's tied for second in the league with 20 home runs despite being promoted to Triple-A Pawtucket three weeks ago. He led the Eastern League with 68 walks at the time of his promotion, and his .371 on-base percentage ranks third while his .454 slugging percentage and .825 OPS rank fourth.

Across the diamond from Dalbec at third base is Trenton's Chris Gittens, who leads the league with 21 home runs, 74 RBIs, a .392 on-base percentage, a .500 slugging percentage and an .892 OPS. Reading's Darick Hall is the designated hitter thanks to his league-leading 34 doubles and 196 total bases, the latter of which is one ahead of 2016 No. 1 overall pick Mickey Moniak, who was named an All-Star in the outfield and leads the circuit with 13 triples. The Phillies' No. 9 prospect's closest competitor in that category has just six.

Bowie's Zac Lowther, the Eastern League leader with 12 wins, was named to the team as the left-handed starting pitching complement to right-hander Manning. Baltimore's No. 10 prospect has 131 strikeouts, which ranks second to Manning, while his 2.77 ERA ranks fourth and his 130 innings pitched are tied for fourth.

(Update: In the week after the All-Stars were announced, Gittens was named MVP, Manning won Pitcher of the Year and Erie outfielder Jose Azocar took home Rookie of the Year honors. Also, Bowie's Buck Britton was named Manager of the Year.)

Here is the complete list of Eastern League end-of-season All-Stars: