Manning, Stewart, Cameron revving up on way to Motown 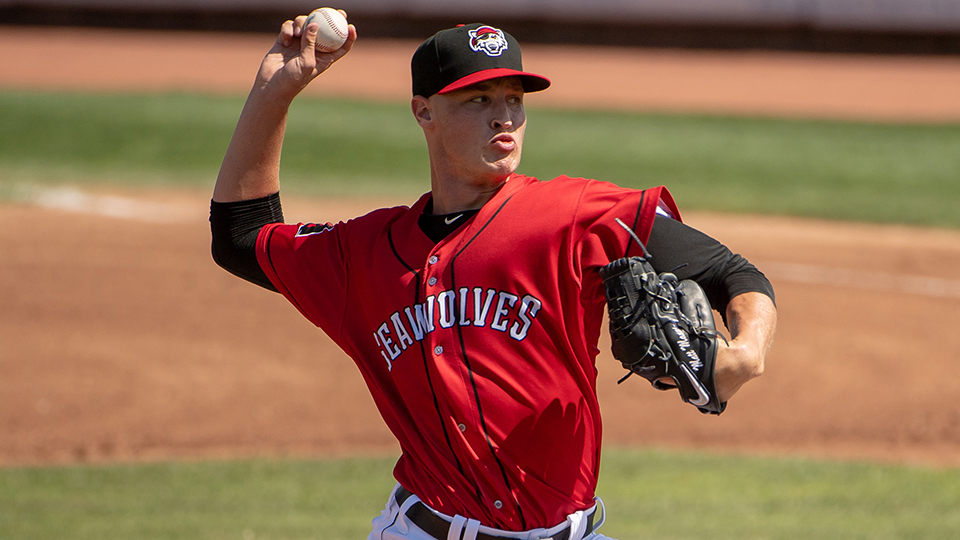 The Detroit Tigers have had one winning season in the past four years after reaching the playoffs every year in the first half of the decade. This season did not see much success at the Major League level, although touted prospects such like slugging outfielder Christin Stewart, infielder Dawel Lugo, outfielder Victor Reyes and right-hander Spencer Turnbull made their big league debuts.

In the Minors, the Tigers are beginning to see signs of a turnaround. Their once-fallow farm system is top heavy with talented right-handed pitchers, including 2018 No. 1 overall Draft pick Casey Mize, 2017 first-rounder Alex Faedo, No. 2 prospect Matt Manning and third-ranked Franklin Perez. Combine that with a big leap forward by outfielder Daz Cameron and the great pro debut of Brock Deatherage and the Tigers finally have some bite again.

Catcher -- Greyson Greiner, Toledo (46 games): The tallest catcher in baseball at 6-foot-6, Greiner has been hailed for his throwing arm and receiving skills, despite his size. His athleticism allows him to frame the ball well and he threw out 30 percent of runners trying to steal.

"Grayson is a solid defensive catcher," said Tigers director of player development Dave Owen. "[He] has a good feel for calling a game and handling a pitching staff [and] spent some time with the big club, which is a tremendous learning opportunity."

The 2014 third-round pick out of the University of South Carolina hit .266/.350/.405 at Triple-A and made his Major League debut in May, one of several stints in the big leagues.

"His bat continues to develop," Owen said, noting that Greiner was a "great teammate."

The 26-year-old sustained a right wrist injury on Oct. 15 in the Dominican Republic and will undergo minor surgery.

Honorable mention -- Jake Rogers, Erie (99 games): Acquired in the deal that sent Justin Verlander to the Astros, Rogers was projected by scouts as a glove-first backstop with a plus arm who might not hit enough to start in the Majors. This year, his average slipped, but he continued to tap into his raw power. Rogers' combination of defensive prowess and power makes him a good bet to reach the big leagues.

First baseman -- Josh Lester, Erie (127 games): The 2015 13th-round pick from the University of Missouri broke out the power bat this year. The one-time Little League World Series champion [Columbus, Georgia] slugged a career-high 21 homers for the Seawolves and also drew a career-best 61 walks.

"Josh shows up to play every day," Owen said. "He plays the game the right way. [He] had a nice power year in Erie and looks to continue improving in 2019."

The 6-foot-3 right-handed hitter was especially hot in the second half, smacking 14 homers after the All-Star break, including eight in August.

Second baseman -- Kody Clemens, West Michigan (41 games), Lakeland (11 games): The third of Roger Clemens' sons to get drafted, Kody is considered the best prospect. The University of Texas product was a third-round pick in June and backed that up with a strong pro debut. The Big 12 Conference Player of the Year posted an .864 OPS with Class A West Michigan before coming back to earth with a .640 OPS in the Florida State League.

"Kody is a ballplayer," Owen said. "He loves the game and brings it every day. He's a solid defender at second, his bat has some pop and he battles you with quality ABs. We look forward to having Kody in our system for the full 2019 season."

Although scouts don't project the lefty hitter to post a high average, they believe he could swat 20 homers annually as he matures. He's an average defender who might be limited to second base after undergoing Tommy John surgery as a sophomore.

Honorable mention -- Willi Castro, Akron (97 games), Erie (26 games), Toledo (five games): The Indians signed Castro out of the Dominican Republic in 2013, but he didn't break out with the bat until 2017, when he ranked among the Carolina League leaders in hits (second), batting average (fourth) and runs scored (sixth). After a slow start at Double-A this year, Castro's bat woke up following a Trade Deadline deal for Leonys Martin.

Defensively, the Tigers' No. 10 prospect has an above-average arm, good hands and infield actions at shortstop.

Third baseman -- Danny Pinero, Lakeland (119 games): The 2016 ninth-round pick out of the University of Virginia had a solid season with the Flying Tigers, showing more over-the-fence power than he had while continuing to get on base at a good clip. He headed to the Arizona Fall League.

"He's a gap-to-gap hitter and still developing in all areas," Owen said.

Pinero was a shortstop in college but played all over the field in 2018 and is likely a utilityman moving forward.

"Danny is a very versatile player," Owen said. "He has played first, short, third base and left field and is very surehanded at all positions."

"Issac can really swing the bat," Owen said. "He really competes and gives you quality at-bats."

Paredes actually hit better after his promotion to Double-A, putting up a .321/.406/.458 slash line in 39 games. On defense, scouts say he's more likely to end up at third, where his bat plays, or second.

"He has the ability to play short, second and third and continues to improve on defense," Owen said.

"Brock is a gamer," Owen said. "A 2018 Draft pick and he made it to the FSL. This guy plays with passion. He's very aggressive at the plate and able to play all three [outfield] positions."

A super athlete, Deatherage has legitimate pop in his left-handed bat, scouts say, and his speed garners 80 grades on the 20-80 scale.

"Daz has the ability to impact the game on both sides of the ball," Owen said. "He started in the FSL and ended up with our Triple-A club in Toledo. He has a tremendous work ethic and goes about his business the right way. He will be an exciting young man to watch as he continues to develop."

Like his Gold Glove-winning dad, Cameron plays a plus center field with an above-average arm, according to scouts. After a rough start to his pro career in the Astros system, Cameron has put himself in position to reach the bigs with the Tigers.

Christin Stewart, Toledo (122 games): Long considered the best power bat in the system, Stewart broke through to the Majors this year. The former University of Tennessee slugger clubbed 23 homers at Triple-A and added two once he got to Detroit.

The sixth-ranked Tigers prospect isn't a big guy but has a quick bat that generates his above-average power. He cut back on his strikeouts (108) and increased his walk total (68).

"Christin had another power year with the bat," Owen said. "He got his first taste of the big leagues in September, which will be a great learning tool for him. He continues to work on staying through the ball and having consistent at-bats."

Stewart is considered an average defender and may be limited to left field because of his average arm, but the Tigers love his work ethic.

"His defense is still a work in progress," Owen said, "but he's a hard-working young man."

Utility player -- Ronny Rodriguez, Toledo (63 games): Rodriguez's road to the Majors was a long and winding one. He was born in the Dominican Republic, came to the United States at 12 and attended high school here only to return home. In spite of playing high school ball in the U.S., MLB said Rodriguez didn't have to go through the Draft and he ended up signing with the Indians for $375,000 in 2010. He was considered one of the system's best infield prospects for a while but topped out at Triple-A and signed with the Tigers as a Minor League free agent last December.

This season, his bat-to-ball skills and versatility saw him finally break through to The Show after he hit .338/.365/.558 at Triple-A.

"Ronny brings a lot of energy to a team," Owen said. "He loves to play the game. He's another versatile player who can play multiple positions."

The 26-year-old was especially good in May, earning International League's Player of the Month honors after hitting .383.

"Matt had a good developmental year," Owen said. "He commanded his fastball better along with improving his curve and changeup. He pitched up to Double-A this year. It will be fun to watch as he continues his development in 2019."

The native of Elk Grove, California, slots just behind No. 1 overall pick Casey Mize among the Tigers' Top 30 prospects, thanks to a low-90s fastball, power curve and improving changeup. Manning really shined with Lakeland, where he struck out 65 over 51 1/3 innings and held opponents to a .176 average.

The 26-year-old pitched a career-high 119 1/3 innings in the Minors and ranked third in the system with 133 strikeouts. He exhibited decent control and did his best work in June, winning Eastern League Pitcher of the Week laurels after fanning 11 in a four-hit shutout. Turnbull made his big league debut in September and figures to get a look in 2019.

Encouraged by his work at Double-A, the Tigers moved him to Toledo and stretched him out with great success. He made 10 starts, going 4-0 with a 2.67 ERA and striking out more than a batter per inning.

"Matt did a nice job for us this year starting out in Double-A, then performing well in Triple-A and earned a promotion to Detroit," Owen said. "His fastball command and control improved to go along with his plus curveball. I'm looking forward to a good year from Matt in 2019."

Hall's fastball has below-average velocity at 86-88 mph, but he locates well and his curveball is a slow, sweepy pitch that gives batters fits. He was lit up in a brief audition with the Tigers -- opponents batted .452 against him -- but his stuff plays out of the bullpen and he could fit with the big club as a reliever.

The soon-to-be 24-year-old isn't overpowering by 2018 standards -- his fastball sits in the 92-94 mph range -- but Houston's deception makes the heater play up. Scouts say that his curveball can get too loopy and his changeup is still a below-average offering at this stage.

Still, Owen is optimistic about the progress of the Mississippi State product.

"Zac did a nice job out of the 'pen for us in Toledo," he said. "His fastball has life and deception. He's still improving on his secondary pitches, but we expect Zac to continue his development and have a good 2019."