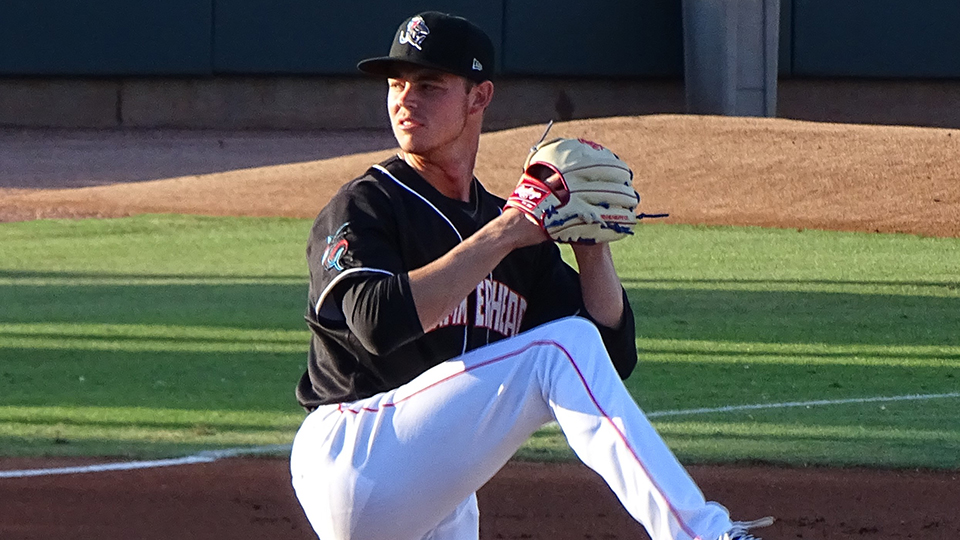 Will Stewart had almost every answer on the mound for Class A Advanced Jupiter on Friday night.

The Marlins' No. 21 prospect took a no-hitter into the eighth and ended up allowing one hit over 7 2/3 innings as the Hammerheads blanked Lakeland, 5-0, at Roger Dean Chevrolet Stadium. He struck out seven and issued one walk.

"Every pitch I threw tonight felt good," Stewart said. "My changeup was working and my slider turned into more of a power pitch tonight. I used my slider more than I did my changeup, which is kind of odd for me. It wasn't so much about what was working but what I wanted to throw at that point. It felt amazing tonight."

Stewart (1-0) did not give up a hit until 23rd-ranked Tigers prospect Brock Deatherage lined a two-out double to left field in the eighth. The only other runner to reach against the lanky left-hander was Daniel Reyes, who drew a leadoff walk in the second. He was promptly erased on a double play as Stewart retired the next 19 batters, a fact that surprised the pitcher after the game.

"Nineteen straight? I don't think I have ever done that before, so I'm pretty excited about that one," he said. "Honestly, in the heat of the moment, you don't think about it. I didn't know how many hitters I had retired in a row. Nothing really sunk in until I came out of the game and we ended up getting the win."

Taken by the Phillies in the 20th round of the 2015 Draft, Stewart was acquired by the Marlins in February along with top prospect Sixto Sanchez, catcher Jorge Alfaro and future considerations in the trade that sent catcher J.T. Realmuto to the Philadelphia. The 21-year-old allowed four hits and two runs while striking out four over 5 2/3 innings in his season debut last week.

Satisfied with his physical development, Stewart spent this spring working on what happens inside his head during outings.

"Mentally-wise, I wanted to be stronger than I was last year," the southpaw said. "I have this thing that my mom calls the gift of nothingness. I throw my pitch, do my job and whatever happens, happens. I don't care what the result is. My main focus during the spring was taking that mentality and amplifying it, because I knew I was going to be in a harder league this year."

The 6-foot-2 Alabama native received early run support as Lazaro Alonso staked him to a 1-0 lead by singling home No. 16 Marlins prospect Tristan Pompey in the first. Micah Brown tripled in the second and came home on a base hit by Cameron Baranek, who scored on another single by 12th-ranked Jose Devers.

"Run support is everything as a pitcher," Stewart said. "With run support, you don't go out with a different mentality, but you know it is going to be OK if you give up a hit. Them putting up runs like that tonight is one of the big reasons I went so far in the game."

Alejandro Mateo relieved Stewart and gave up one hit while striking out two over the final 1 1/3 innings.

The no-hitter would've been the Hammerheads' first since May 7, 2016, when Jorgan Cavanerio, Raudel Lazo, Drew Steckenrider and Jose Adames combined on a 6-0 victory over Palm Beach.