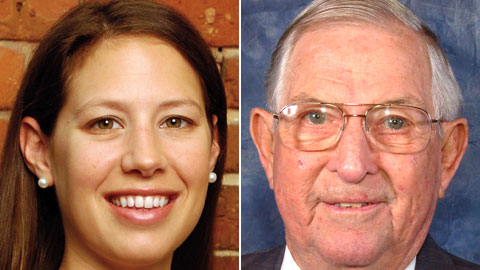 ST. PETERSBURG, Fla.-- Minor League Baseball has selected Florida State League President Chuck Murphy and Montgomery Biscuits General Manager Marla Terranova Vickers, respectively, as this year's recipients of the Warren Giles and the Rawlings Woman Executive of the Year Awards. Murphy and Terranova Vickers will be honored during the December 5-8 Baseball Winter Meetings at the Hilton Anatole in Dallas, Texas.

Warren Giles Award -- Chuck Murphy, Florida State League
The Warren Giles Award annually honors outstanding service as a league president. Murphy completed his 22nd year as president of the Florida State League (FSL) in 2011. His circuit was the only one to set an attendance record this season, as its 12 clubs attracted 1,296,962 fans, topping last year's record-setting total by more than 100,000 fans.

"I am honored to receive it again and credit the directors and GMs in the league for their outstanding work this past season in raising our attendance," Murphy said. "It's their promotions and community involvement that brings the fans to the ballpark, so I accept this award on behalf of them. They are the ones who keep introducing new ideas for the league."

"Chuck Murphy's leadership of the Florida State League was never more tested than in 2011," Minor League Baseball resident Pat O'Conner remarked. "Despite a struggling economy and the worst hurricane season since 2008, the Florida State League registered a milestone at the turnstiles. The league as a whole and three of its teams established single season attendance marks this season."

From 1984-86, Chuck was the vice president/general manager of the Daytona Beach Islanders in the FSL. After the club was sold in 1986, he became the manager of Daytona Beach Parks and Recreation. Murphy served in this capacity until 1990 when he began his tenure as FSL president.

Rawlings Woman Executive of the Year Award -- Marla Terranova Vickers, Montgomery Biscuits
Marla Terranova Vickers completed her 11th season in MiLB and first as general manager of the Montgomery Biscuits in 2011. Under her leadership, the Biscuits sales' figures increased in several areas this year, despite the state of the economy. She also worked with the team's marketing staff on enhancing the overall fan experience through nightly surveys.

One of the things the club introduced based on the survey results was a food item of the night that was deeply discounted and promoted throughout the game. The club also introduced a season ticket holder concierge program in which staff members were assigned as the point of contact for every season ticket holder to answer their questions and fulfill their requests, if possible.

Believing that one staff member can ruin a fan's experience, Marla trains new employees for a few hours in customer service, preparing them for various situations they may face during the season. The team's efforts were rewarded this year by being named "Best Family Entertainment in the River Region" by the Montgomery Advertiser newspaper.

Marla was the Biscuits' first employee on the ground in Montgomery, Ala., in 2003, a year before the club began play in the Southern League after relocating from Orlando, Fla.

"Marla has literally been with the Biscuits from day one, earning the way to her current position as general manager through her dedication and hard work," O'Conner said. "The fact that her attention to customer service and the overall fan experience resulted in the Biscuits winning an award this year for the best form of family entertainment in their market is a testament to her work ethic and business acumen. She is a very deserving recipient of the Rawlings Woman Executive of the Year Award."

"It is a privilege to even be considered for the Rawlings Award and I am honored to be this year's recipient," Terranova Vickers said. "I am very fortunate to have great female mentors and the opportunity to work with many talented and dedicated women on our staff, in the Southern League and around baseball. I greatly appreciate the support and encouragement of my colleagues and family and hope to continue to make them proud."

Terranova Vickers, who will receive the 34th Rawlings Woman Executive of the Year honor at the Awards Luncheon on Monday, December 5, is also involved with several civic organizations and donates her time and talents whenever possible in the Montgomery community.