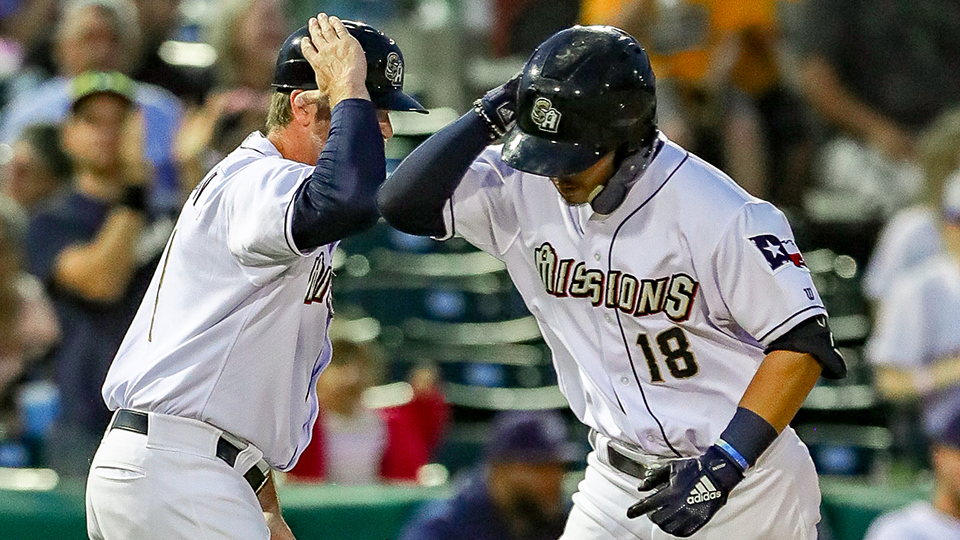 Keston Hiura's big night at the plate didn't come without some theatrics.

The top Brewers prospect homered twice, doubled and walked, powering Triple-A San Antonio to a 4-3 victory over Oklahoma City on Friday at Nelson Wolff Stadium. He went 3-for-3 with a walk, although his second big fly sparked a little drama.

With two outs and nobody on in the bottom of the seventh inning, Hiura faced reliever Zach McAllister and crushed a sinking line drive to left field. The ball skimmed over the wall and ricocheted off the chain link fence behind it, bouncing back into play. Hiura slid into second base, thinking he hit a double, but the call on the field was a home run.

Dodgers left fielder Kyle Garlick protested that the ball had stayed in play, but with no replay review in the Minor Leagues, the call could not be overruled. Oklahoma City manager Travis Barbury was ejected by plate umpire Tom Woodring for arguing the ruling.

Hiura's first blast of the night came two innings earlier. MLB.com's No. 19 overall prospect muscled a line drive to straightaway center field on a 3-1 pitch from starter Brock Stewart. It was the second multi-homer game of Hiura's professional career and brought his season total to seven long balls.

Despite the two-homer effort, Hiura credited swing control and not trying to do too much at the plate for his recent success. He's hit safely in 17 out of 21 games this season and is batting .316/.346/.724.

"In the beginning of the season, I struggled a bit being patient at the plate and being a little too aggressive," he said. "Slowing down and being able to see more pitches, being in the driver's seat where you can work leverage counts, that really helped the past few weeks.

"Every at-bat it's, 'Get a ball I can drive, hit the ball hard and whatever happens, happens. I know the power is there, but every time I try to do too much or want to hit a home run, I get out of my swing and approach. It doesn't turn out too well."

Selected by the Brewers with the ninth overall pick in the 2017 Draft, the California native led Division I that year with a .442 average at UC Irvine. In his first season of professional ball, Hiura advanced to Double-A Biloxi, earned a spot in the All-Star Futures Game and added MVP honors in the Arizona Fall League. In 73 Southern League games, he posted a .339 on-base percentage and slugged six homers to go with 20 RBIs. He's projected to reach the Brewers at some point this season, but he says he is "full effort" in San Antonio until that time comes.

Zack Brown (1-2), Milwaukee's sixth-ranked prospect, gave up one run on five hits and three walks while striking out five over five innings. Jay Jackson worked a scoreless ninth for his third save.

Stewart took the loss after giving up three runs on six hits with three walks and four strikeouts in 4 2/3 frames. Daniel Castro led the Dodgers offense with three singles and No. 12 prospect Edwin Rios knocked in a pair of runs with a double in the eighth.