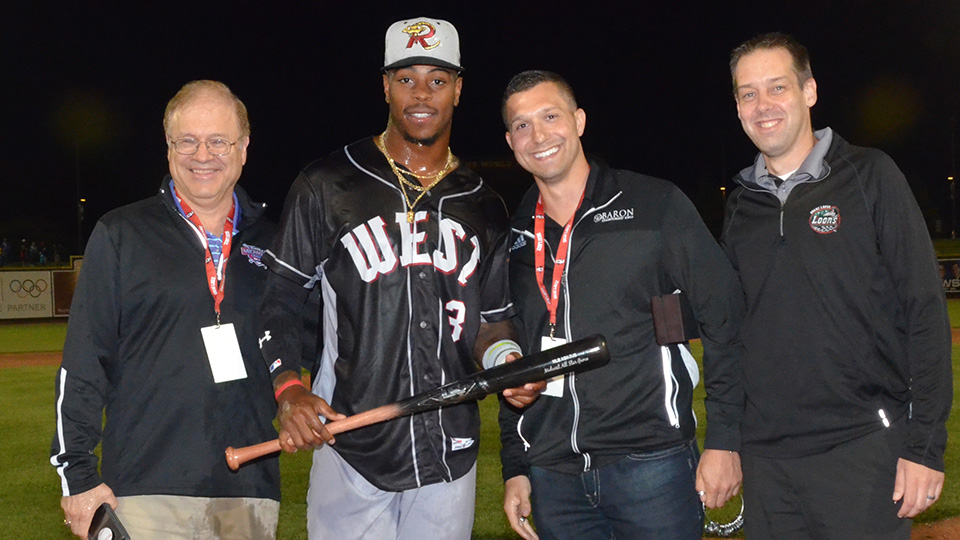 MIDLAND, Michigan -- The West Division was in search of a statement play, clinging to a 2-1 lead in the seventh inning at Dow Diamond in the Midwest League All-Star Game.

So Wisconsin first baseman Monte Harrison blasted his second homer of the game, a towering shot over the left-field wall off Dayton's Aaron Fossas, then trotted around the diamond in celebration with the awestruck crowd of 5,009.

The 22nd-ranked Brewers prospect, who wasn't supposed to play the entire game, knocked in three runs to lead the West to a 5-2 win and earn Most Valuable Player honors Tuesday.

"This was just like another game," Harrison said. "Coming out with the best talent in the league and just playing the game, that's all it is. Good things happen when you play the whole game."

The 2014 second-round Draft pick entered the game hitting .265 with a slugging percentage of .475 in the first half of the season for the Timber Rattlers. He's amassed racked up 59 hits and 32 RBIs.

Harrison, who said he hadn't played in an All-Star Game since high school in Missouri, was the only player for the West with more than one hit.

"Honestly, I've been playing very well for the whole season," he said. "Whether I'm high or low, I try and stay on an even keel, because if you get too high, you'll get humble very fast. I just hope to go into the second half with the same amount of work ethic and everything like that."

The final two runs scored by the West came in the ninth inning with one out. Peoria first baseman Stefan Trosclair advanced to third on two stolen bases before Harrison -- wearing Clinton video coordinator Tyler Collins' No. 3 jersey -- teed off again to left.

Lewin Diaz, one of six representatives from Cedar Rapids, also went yard, smacking a two-run shot to right-center in the fourth. Diaz is in his first year of full-season ball after three years in Rookie-level ball. He finished second for Elizabethton in OPS (.928) and slugging (.575) in 2016.

"The plan was to just score the ball on up," Harrison said. "I don't really try to hit home runs, in my opinion, but it just went out."

The East, however, scratched out the first run of the game. Lansing's Bo Bichette singled on the first pitch by Kane County's Jon Duplantier. Lugnuts teammate Vladimir Guerrero Jr. plated Bichette on a sacrifice grounder.

Guerrero, who finished second in the Home Run Derby contest Monday, did not record a hit in two plate appearances. The top Blue Jays prospect is the son of the legendary Major Leaguer.

The East threatened in the sixth. West Michigan's Danny Woodrow doubled off Cedar Rapids' Clark Beeker. But the Twins righty escaped any damage when Trosclair through Woodrow out at home on a fielder's choice.

Brendon Davis homered off Kane County's Tommy Eveld in the ninth. The shortstop, starting pitcher Dustin May and catcher Keibert Ruiz -- all from host Great Lakes -- saw playing time in the game.

A total of 26 pitchers were used in the game. Wisconsin's Braden Webb earned the win after striking out Bowling Green's Jesus Sanchez in the fourth, the only batter he faced. West Michigan's Gregory Soto took the loss after allowing Diaz's long ball.

"It was a great experience," Harrison said. "I've played against these guys and when talking to them in the locker room, it was so chill, nobody was nervous or anything. We just went out and had a good time and whatever happens, happens."

No player from the East collected more than one hit.

Zach Libby is a contributor to MiLB.com. This story was not subject to the approval of the National Association of Professional Baseball Leagues or its clubs.