Turang walks off, up to another level

Brewers No. 2 prospect heads from Wisconsin to Carolina 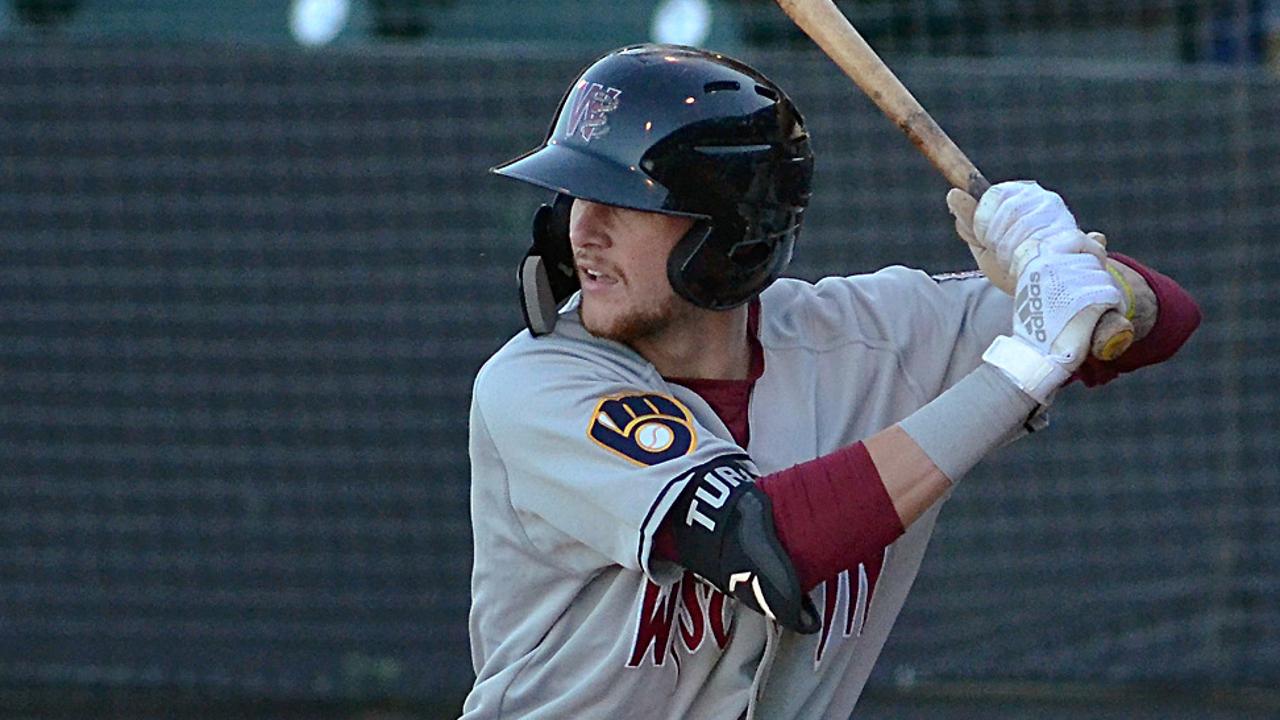 The Marshall Tucker Band crooned "I love a Carolina sunset, that's one thing a man will never forget." After Sunday's walk-off base hit, Brice Turang will find out whether life imitates art in the Carolina League.

MLB.com's No. 92 overall prospect went 2-for-4 with a double and the game-winning RBI in Class A Wisconsin's 4-3 win over Beloit at Fox Cities Stadium, After the game, he was promoted to Class A Advanced Carolina.

Turang helped jump-start the Timber Rattlers' scoring in the sixth inning, stroking a one-out two-bagger to left field off Snappers right-hander Angello Infante that advanced to third Kekai Rios. The catcher scored on a sacrifice fly by David Fry.

Trailing in the ninth, 3-2, Rios beat out an infield single to short that moved Korry Howell to third base and plated Gabriel Garcia with the tying run. With two out, the second-ranked Brewers prospect slapped a single to center off right-handed reliever Jaimito Lebron on the 11th pitch of the at-bat to plate Howell for the win.

"I thought to myself, 'Just stay on top.' I was fouling balls off, so got on top and drove it to center field and we scored and won. It was a team-fought game. We pulled it together, all ended up coming in clutch -- from coming back, scoring to tie it. It all adds up, not just the walk-off."

Then the celebration level was turned up a notch, Turang received word he'd be packing his bags and heading to Zebulon, North Carolina. The Mudcats downed Lynchburg, 12-5, on Sunday in the opener of a three-game series.

"It was great to see him have that kind of success," Rattlers manager Matt Erickson said on the postgame podcast. "We were able to break the news to him after the game. He's done enough here to deserve a callup and he'll be heading to Carolina tomorrow.

"It was a pleasure to work with him. We have a good one there, for sure. From the character, the makeup on down to his skill set, he affects the game in all aspects of it -- on the bases, at the plate, he's shown he can make all the plays at shortstop. ... Carolina is getting a good ballplayer, for sure."

The 2018 Draft first-rounder began his professional career in the Rookie-level Arizona League, hitting .319 in 13 games before moving to the Pioneer League. He wrapped up 2018 playing 29 games with Rookie Advanced Helena, finishing the year with a .283/.396/.352 line across the two levels.

"I'm excited," Turang said of the move to Carolina. "I know a lot of the guys up there. These guys down here were awesome teammates. ... I have one goal -- to make it to the big leagues.

"Some of these guys I might not never play with again, and that's just reality of the fact. I love everybody in that locker room. They treated me with nothing but respect [and] I've made friends for life here."