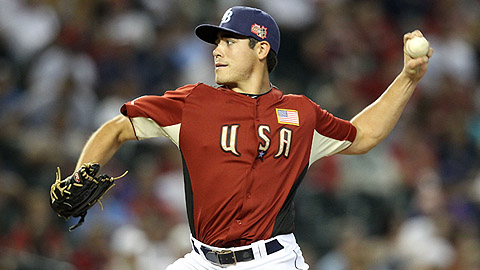 Matt Moore has a reputation for dealing heat. In his Triple-A debut on Friday, he had to deal with some serious heat.

"It was so warm I didn't have the energy to worry about nerves and that," said Moore, who pitched in 98-degree temperatures at Durham Bulls Athletic Park. "I just told myself to be comfortable and feel my emotions and stay in control. But it was warm, and that actually kept me a little preoccupied."

The Rays' top pitching prospect was focused enough to strike out seven, thanks to a fastball consistently registering in the mid-90s, as the Durham Bulls rallied for a 4-3 victory over the Toledo Mud Hens.

"Overall, I was happy with how things turned out," Moore said. "I felt like I was able to get into a groove, just one or two got away from me."

The 22-year-old left-hander, MLB.com's No. 17 prospect, held the Mud Hens to a run on three hits and a pair of walks over five innings. He was promoted after leading all Double-A pitchers with 131 strikeouts at Montgomery and impressing again at the All-Star Futures Game.

A 2007 eighth-round Draft pick, Moore threw 52 of 89 pitches for strikes and ranks third in the Minors with 138 strikeouts. He breezed through the first three innings, striking out two in the opening frame and working around a pair of walks in the second.

"I don't pay attention so much to the strikeouts but rather an out," he said. "I'm trying to get outs and for me, it's better to have a guy swing and ground out on a first pitch rather than work through a seven-pitch at-bat."

The heat, which suffocated ballparks from New York to Texas on Friday, got to the Florida native in the second, when he issued consecutive two-out walks.

"I got a little overheated in the second, tried to do too much. But that was the only inning where the heat was affecting me," he said.

Ryan Strieby officially welcomed the southpaw to the International League with a leadoff homer in the fourth, but Moore rebounded by striking out four of the next seven batters. He got Argenis Diaz swinging on his 89th pitch to end the fifth -- and his evening.

"I missed with a breaking ball high outside and then tried to go low and away with a fastball," Moore said of facing Strieby. "It was about thigh-high and out over the plate. He's a big, tall guy. He did what he was supposed to do."

That was the lone mistake by Moore, who said the Bulls gave him no indication regarding a pitch count or innings limit before the game. When he got the hook in the fifth, he was satisfied with his effort.

"I'm not sure what the plan was. They came up after the fifth and said, 'That's it, we got it,'" Moore said. "I can't argue too much with it being my first game here."

Moore said he had a routine to keep his hands dry from sweat, a byproduct of pitching in Alabama and Florida the last two seasons. His fastball reached 96 mph and he said the Mud Hens were a step up from the Southern Leaguers he'd dominated for 3 1/2 months.

"I felt a couple times where guys I guess had an idea what I might be throwing," he said. "They weren't so aggressive -- we used to get guys to dive at pitches, but the hitters had more discipline of the strike zone."

Moore's debut was highly anticipated by Rays fans and scouts after he went 8-3 with a 2.20 ERA over 102 1/3 innings at Double-A Montgomery. On June 17, he shut down Mobile to become the first Rays Minor Leaguer to throw a no-hitter since 2007.

The resume is impressive and has helped boost his prospect status in recent months, leading Tampa fans to hope he follows the paths of David Price and Jeremy Hellickson. Last year, Moore fanned a Minor League-best 208 batters and was the first Minor Leaguer to top 200 strikeouts since Francisco Liriano in 2005. That came a year after he led the Minors with 176 strikeouts.

The added pressure, he said, hasn't affected him on the mound.

"I still have the same mind-set I had at this time last year. I try to keep my nose off the Internet and out of the magazines to keep me grounded and keep working on where I want to be," Moore said. "I feel I've come a long way in four years. I have a good process, day in and day out."

Moore's arrival in Durham comes in the wake of several Rays prospects getting called up to the Majors in recent weeks, including Alex Cobb, Dane De La Rosa and Robinson Chirinos. He admitted to thinking about a potential callup, but for the most part, he keeps it out of his mind.

"I haven't thought about it too much as a time frame, I've thought about it enough to prepare myself a little mentally if it ever happened," he said. "But other than that, I've paid no attention. I don't ask a lot of questions, I just keep my head down and keep pressing ahead."