TinCaps infielder finding his way after frightening injury in 2010 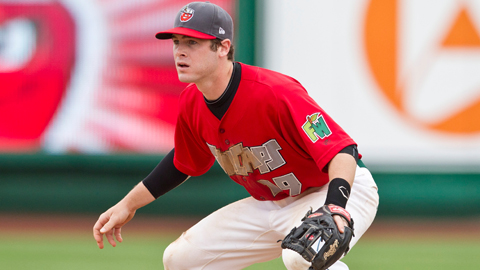 Chris Bisson was a fourth-round pick of the Padres in the 2010 Draft. (Fort Wayne TinCaps)

When Chris Bisson's vision came into focus after he took a 96 mph fastball in the face last season while playing for the University of Kentucky, he saw his nose, which was turned sideways. He took it as a good sign.

"I fell to the ground; I didn't pass out," said Bisson, a fourth-round pick of the Padres who is playing second base for Fort Wayne. "When I got up, my eyes were watered, and I was scared to death that I couldn't see. Everything was blurred.

After seeing two curveballs, the All-American Bisson got a fastball. He expected another curve, but a bolt of lightning came his way.

"It was a two-seam fastball, 96 miles an hour," Bisson recalled. "I had no time. I didn't even react. I saw the video afterward. It wasn't pretty. My nose was messed up."

Bisson, who led the SEC in stolen bases with 32 thefts in 2010, returned to action five days later.

"I came back in a game against Murray State. The bases were loaded, and coach walked down to me and said, 'What's up?' I'm like, 'Hey, give me a bat.' To me, you just have to get back out there. I got a single."

Stepping into the batter's box took an act of courage on Bisson's part.

"By no means was it easy," Bisson said. "That first fastball that blew by me close to my head, I got a bit of flashback. As soon as that thing comes toward my face, all I want to do is just bail out, because I don't want it to happen again. I'm getting a little more comfortable being able to read the ball."

San Diego loved the quickness and fight Bisson flashed on the field, and the Padres drafted him. But Bisson's first season in the pros hit roadblocks. The Ottawa native missed two weeks because of a visa problems, then sat out most of the season at Eugene due to post-concussion syndrome.

"This season has been a long time coming," said the lefty-hitting Bisson, who's batting .230 with five stolen bases in 30 games. "I'm still getting back into the flow. Ever since I got hit, I haven't been the same. There are glimpses of what I used to be, how I used to play and how aggressive I was, and then there are times when I'm still timid against lefties. The Padres have been great about giving me time and working with me."

Bisson, 21, didn't play baseball until he was 15. He played softball with friends in Canada.

"That's where I got my slappy approach, playing softball," Bisson said. "It was just something to do with my friends, because they were all playing. Finally, my dad said, 'If you want to play baseball, let's put you in Little League.' I had a lot to learn, because we didn't have a high school team. I was trying to learn how to swing, because in softball, you just put it on the ground and go, because the bases are 35 feet away. When I got to Kentucky, I had a tough time. They worked a lot with me on my swing, but it got better my sophomore year."

Baseball island: Modern Woodmen Park, home of the Quad Cities River Bandits, was an island during flooding by the Mississippi River last week. Waters from the Mississippi reached 22 feet (flood stage is 18) and surrounded the park, but no games were lost. When half the season was wiped out in 1993 due to severe flooding, the city of Davenport put in flood protection for the ballpark. Parking lots to Modern Woodmen were underwater in the recent flooding, but the city built elevated walkways so fans could get from downtown parking areas to the ballpark.

Bullpen strength: Cedar Rapids' bullpen turned in an exceptional effort in a 17-inning, 4-3 victory over Burlington on May 4. Four Kernels relievers combined on 11 innings of shutout ball, including three hitless frames by right-hander Donn Roach. The two teams combined for 33 strikeouts in the contest, which took nearly five hours to complete.

Curt Rallo is a contributor to MLB.com. This story was not subject to the approval of the National Association of Professional Baseball Leagues or its clubs.