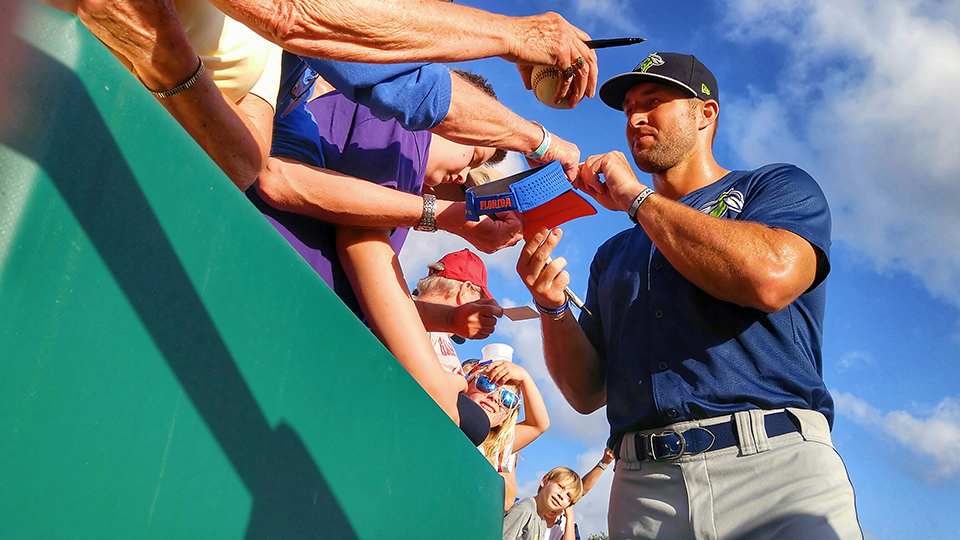 Tim Tebow's influence during his time on the South Atlantic League went beyond the numbers he posted in the field. (Cliff Welch/MiLB.com)

Tim Tebow is continuing his baseball journey in the state in which he achieved football fame.

The Mets promoted the former Heisman Trophy winner to Class A Advanced St. Lucie in the Florida State League on Sunday.

"I do think the fact that St. Lucie is our Spring Training home, he's familiar with the surroundings, the circumstances there. I'm not sure how much of an additional challenge it will be, but it's a step up ... and we certainly think he can handle it," Mets general manager Sandy Alderson told reporters in San Francisco.

"His recent last three weeks are actually trending pretty well," Alderson said. "Given all the other circumstances, age and so forth, we thought this was the right time to promote him.

"I think we're pleased with the first half of the season. It's not like he's tearing up the league, but at the same time, all the indications are positive."

While Tebow has flashed some power with 18 extra-base hits among 47 knocks, strikeouts have been an issue for the left-handed hitter. He's fanned in 28.6 percent of his plate appearances while walking in 9.5 percent.

Tebow has spent all of his time defensively in left field while rotating through as Columbia's designated hitter on a regular basis. In the field, the 2007 Heisman Trophy winner has committed seven errors and posted an .879 fielding percentage with one assist. He's hit substantially better when playing the field with a .229/.333/.364 line and all three of his homers in 140 at-bats as an outfielder compared with .208/.266/.292 as a DH.

"You're starting all over after 12 years, so you've got to put in a lot of work," Tebow told media after a game in Lakewood, New Jersey last month. "You also have to be mentally tough because baseball is a game of failure. You have to be able to learn from it."

The former football star's impact has gone much further than his performance on the field, of course. Columbia's average attendance is 5,230 per game, second-best in the South Atlantic League and substantially better than the 3,785 the Fireflies drew in their inaugural season last year. When Columbia hits the road, Tebow has been a major draw.

"Tim brought an incredible amount of experience and leadership to our clubhouse," Fireflies president John Katz said in a statement Sunday. "His contributions, both on the field and in our community, have made a tremendous impact on our team, the City of Columbia and the entire South Atlantic League."

The Mets signed Tebow to a Minor League contract last Sept. 8 and sent him to the Florida instructional league. After a monthlong stint there, he moved to the prestigious Arizona Fall League. There, he joined the Minor League Baseball podcast to discuss his new career move and posted a .194/.296/.242 slash line in 19 games.