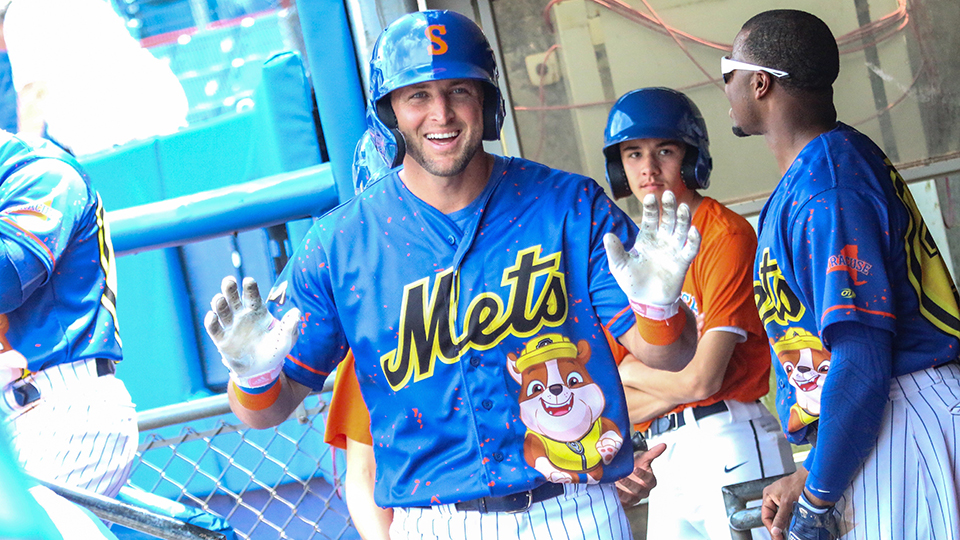 Tim Tebow is hitting .171 in May, up 22 points from the mark he posted in April. (Danny Tripodi/Syracuse Mets)

A casual fist bump welcomed Tim Tebow down the stairs of the home dugout at NBT Bank Stadium on Sunday afternoon. He slapped five with a coach, touched knuckles with a teammate, then looked for more congratulations. He got none. Most of his Triple-A Syracuse teammates looked away as if the outfielder had returned from just another plate appearance.

This time was different, however, and it required a special procedure.

The former Heisman Trophy winner crushed his first Triple-A homer in his 105th at-bat in the International League, half of Syracuse's offensive output in an 8-2 loss to Columbus on Sunday. So after Tebow pretended to high-five the air, put away his helmet and removed his batting gloves, every Met in the dugout mobbed him in celebration.

Tebow's first Triple-A dinger came against veteran right-hander Asher Wojciechowski in the third inning of his 34th game at the Minor Leagues' top level, a stark contrast compared to his first two seasons. Two years ago, he homered in his first professional at-bat with Class A Advanced Columbia. He took it a step further last season, going deep on the first pitch he saw with Double-A Binghamton.

"I think I'm improving. I'm working, developing," Tebow told the Associated Press on Thursday. "I think I'm getting better, adapting to some really good players, and I think that's important."

"It definitely helps with confidence. More than just confidence, getting into a rhythm," Tebow told the AP. "I think sometimes if you're not in rhythm you can press a little bit, swing at pitches you don't want to swing at. But when you're in a rhythm, it just flows a little bit better. I think that's important."

Tebow fared better in the Eastern League last year, compiling a .273/.336/.399 slash line in 271 at-bats with the Rumble Ponies. He struck out 103 times, but he totaled 21 extra-base hits and hit .340 in July before a broken right hamate bone ended his season early.

The competition in the IL has been tougher: the University of Florida product has struck out in 39.8% of his at-bats while drawing eight walks.

"Double-A pitching is a lot of younger guys that have good velocity on the fastball but no secondary pitches," Syracuse manager Tony DeFrancesco told the AP. "Here, Tim is seeing everything coming at him but the kitchen sink. They're throwing fastballs hard in on him, they're breaking balls, they're elevating. He just hasn't seen enough of that right now -- and they're throwing strikes."

Even with Tebow's breakthrough blast, which followed David Thompson's second homer of the year, the Mets couldn't keep up with the Clippers. Syracuse went 0-for-12 with runners in scoring position.

Four relievers combined to blank Syracuse over the final six frames. Brooks Pounders (2-1) gave up one hit and one walk over two innings for the win.

The Paw Patrol jerseys the Mets wore on Sunday were auctioned after the game to raise funds for the Upstate Golisano Pediatric Trauma Unit and Safe Kids New York. Tebow's jersey received the highest bid of $890, the team reported.