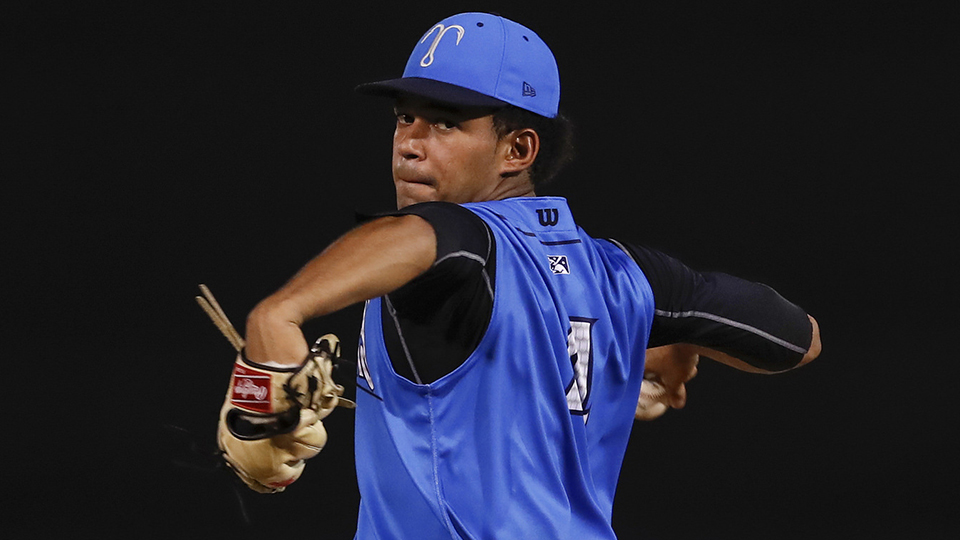 Deivi Garcia could be the poster boy for quick Yankees climbers after moving to Trenton in 2018. (Mark LoMoglio/MiLB.com)

TAMPA, Florida -- This is a different Yankees farm system than one spring ago.

The organization boasted six Top-100 prospects then. They're down to two now. Gleyber Torres and Miguel Andujar graduated with impressive rookie seasons in 2018. Justus Sheffield was moved to the Mariners to acquire James Paxton. Chance Adams and Albert Abreu have moved down in the ranks due to injuries and ineffectiveness. Estevan Florial is the only one of that group left, and he's been joined by breakout prospect Jonathan Loaisiga, who is about halfway to prospect graduation with 24 2/3 Major League innings.

If there's a strength among New York's new-look group of prospects, it's pitching -- young, high-octane pitching. Of the30 prospects ranked by MLB.com, 21 make their livings on the mound. Eighteen of them received grades of 60 or higher on the 20-80 scouting scale for their fastballs. Eleven are 21 years old or younger at this moment.

The group of arms might be missing a shining star like Sheffield, but its collective raw nature leaves room for a number of high ceilings. No. 4 Deivi Garcia, for instance, appeared at three levels in 2018, striking out 105 in 74 innings while showing a plus fastball and plus curveball. No. 10 Roansy Contreras posted a 2.42 ERA, a 1.03 WHIP and a .196 average-against over 63 1/3 frames in his first stateside season. No. 13 Luis Gil and No. 14 Luis Medina are capable of touching triple-digits, and if they improve their control (they combined for 77 walks in 82 innings at short-season ball), they have monster potential.

MiLB.com caught up with Yankees senior director of player development Kevin Reese to gauge the organization's excitement for its young pitching potential, get an update on their progress this spring and check in on two promising backstops who will be tasked with catching these electric arms now and potentially for the long-term future.

MiLB.com: What's the atmosphere like in camp this year? What stands out from an outside perspective is the young pitching, but what's your sense a couple weeks in?

Reese: We had a lot of guys show up early, so it's been good for us to attack some things we've wanted to work on with guys. We have a lot of good arms. That's apparent everywhere you look. Every scout, [everyone] that comes in say, "Man, everybody's throwing 94, 95, 96, 97 [mph]." That's definitely a nice thing to have. Our amateur and international scouting departments have done a really nice job of feeding the system. Just like everybody else, we're trying to keep our bearings with everybody and keep everybody healthy. So far, it's been a relatively healthy camp. So fingers crossed, hopefully it stays that way.

MiLB.com: About the young pitching you've mentioned, what's the competitiveness level among the guys that could be at the Tampa, Charleston and Staten Island levels?

MiLB.com: What's the rubric you might use as an organization to determine when a pitching prospect is ready to advance?

Reese: There's not anything hard and fast. It depends on where they're at in the individual development of their pitch package, their maturity levels, their ability to throw strikes, all of those things. We're evaluating all of those things at the same time to decide who's ready. Once they're in competition, the level of production from the competition is going to tell you when they're ready, for the most part.

MiLB.com: You mentioned earlier too that there are a lot of guys hitting quality velocities already in camp. What do you do as a system to foster and grow velocity?

MiLB.com: But is velocity still something that you'll explicitly push for with pitching prospects, especially in the modern game where it's a quick route to standing out?

Reese: We preach success. We know that velo is a huge component of that. It's not like, 'Hey, every time out there throw as hard as you can.' But these guys know that the harder they can throw with some command and some consistent quality of their pitches, that's going to be their best path to success.

MiLB.com: One guy that stood out to everyone was Deivi Garcia. What can he do to build on 2018 and round out his game in 2019?

Reese: He made an outing in Double-A, which wasn't really the plan but it just worked out that way. He really showed no fear of anything that was going on at any level. For him, it's just continuing to get stronger. He's not the most physical guy. We want him to hold up durability-wise. He's showed no issues with that, but we're just trying to keep him in top physical shape because I don't think the mentality's going to stop him. I don't think the stuff's going to stop him. It's just about moving him along the right pace, and when New York's ready for him, I think he'll be ready for New York.

MiLB.com: And stuffwise, how did he grow last year?

Reese: It really comes down to consistency with all of these guys. You'll see someone flash a plus pitch and then bounce the next three or the next curveball doesn't have as much bite. He does a really good job of repeating. His movements are so controlled. He's a really good athlete. He's got good feel. He's got all the qualities. He didn't even break with a full-season club, and he's pitching meaningful games in big spots. He was able to do that because he was showing all of those qualities, night in and night out. He'll continue along those lines and be great.

MiLB.com: With the way he moved to multiple levels and others like Michael King did the same, do you use them as examples when talking to other pitchers about their potential paths?

Reese: Absolutely. That's one of the conversations we have with guys when they're maybe upset they didn't break with Charleston out of Spring Training. No one wants to play in these extended leagues. Just because you're not the first one out doesn't mean anything. We don't have any rules on spending so much time at a level before you're allowed to move to the next level. I think that helps us when we're trying to deliver a message. We can put our money where our mouth is. When guys are having a lot of success, boom, they're moving on up.

MiLB.com: Roansy Contreras could be along those lines as someone who sees a lot of levels quickly. What does he need to do in 2019 to make that happen?

Reese: When you talk about Deivi and how consistent he was, I think at times Roansy wasn't as consistent. His stuff, he'll flash plus stuff across the board. He's got huge velo, and he's a big, strong, physical kid. It's just being more consistent, and I think he has the velo to move quickly as well.

MiLB.com: What is the plan for Matt Sauer, coming off his 13 starts at Staten Island, and what can he do over a full season?

Reese: I think there's a good chance he starts in Charleston. He showed a little more velo toward the end of the year. He's so big. He's a big, strong kid. I think he's still figuring his body out. But he's got all the right things going for him. He's a mid-rotation, even top-of-the-rotation starter if everything clicks for him. We're going to send him out there and see what he can do.

MiLB.com: Luis Medina and Luis Gil have shown high-octane stuff as well, but have each really struggled with control issues. What is the organization doing to help them find the strike zone more regularly?

Reese: Our pitching department is banging their heads daily on what they can do to improve those guys. There's a ton of hope. They're doing a ton of drills and things to help find their command and get them to where they can be. We've seen flashes. That's the thing that gives you that hope. It's not like this guy, especially Medina, is going to be always all over the place. He's showing places where he can land all three pitches and make people look silly. I know it's in there. There was some stuff where maybe he wasn't the most mature kid last year handling some of the things, but we're hoping it's a clean slate this year. He's been throwing a lot of strikes, and hopefully he gets off to a good start.

MiLB.com: Flipping it over to the other side of the battery, the Yankees used two high picks last year to take catchers in Anthony Seigler and Josh Breaux in the first and second rounds. First, Seigler doesn't appear in any of the workout groups. What's his status?

Reese: He's got a little quad strain that he's working through right now. So he's a little dinged up. Breaux's been playing, he hit a home run out here the other day. They're both physically gifted guys. They're also very dissimilar. They're nothing alike. The body types are different. Breaux will flash the huge arm and the huge power. Seigler's got really, really good contact and a good eye. He doesn't have the huge power yet, but he's 19 years old. We're expecting him to grow up and get into his man body. Really excited about both those guys.

MiLB.com: What is it going to be like throwing those guys right into it and telling them they'll have to catch a lot of these talented arms we've mentioned right out of the gate?

Reese: It's funny. People used to talk about, "Hey, this guy isn't ready to catch the velocity." But if you're not ready to catch the velocity around here, you're never going to catch ever. It's nice to have those guys getting practice catching those guys and getting comfortable with them. Then there's no fear from us about which pitchers are throwing to which catchers. Like I said, we've had guys out here for a while getting built up, and the catchers are doing an awesome job. Getting familiar with these pitchers is only going to help them down the road.

MiLB.com: What kind of effect will that quad strain have on Seigler to begin the season? Will he be held back in extended as a result?

Reese: There's a chance he could be holding back. Like I said, it's not something that should hold him back for a long time. But right now, it's mid-March, and he's not out on the field, so that puts a little bit of a question mark on it.

MiLB.com: One last guy to touch on. Tanner Myatt was an 11th-round pick last year but is already showing a plus fastball that is getting some attention. What are you hoping from him in 2019?

Reese: I didn't get to see a whole bunch of him last year, but he was out here touching 101 last week. Everybody's like, "Whoa, slow down, man. It's March." Huge arm. Really a lot of life on that velo as well. Who knows where he'll end up, but the sky's the limit with that type of ability.